An Engineer’s nite, this is nite is. As newcomer Eunice asked what all our occupations were, we answered: me – Electrical & Electronic Engineer, jack208 – Software Engineer, Lester – IT pseudo-Engineer, Eunice – Mechanical Engineer (And then later Cristiano, the Software Engineer joined us). I think it has something to do with Engineers being structured and good with rules and such-like nonsense.

Anyway, on with the games!

First we played F.I.T.S. or Fill In The Spaces by Reiner Knizia. This is a Tetris like game with some clever mechanics to score or minus points depending on how the tetris blocks fill up the spaces. I find it quite a light filler with more chaos than I thought in the way the blocks turn out. Not much chance of optimising the blocks placement but a challenging task nonetheless to mitigate the randomness. 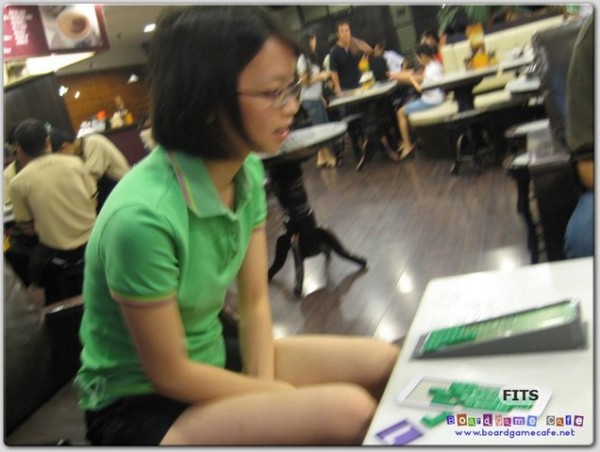 This is Eunice, cometh to join us for the first time.

And this is Marcus cometh to collect his Brink of War expansion for Race For the Galaxy and to be the temp FITS backseat player. 🙂

Next we did Through the Desert, which I think both Eunice and Lester both enjoyed playing for the first time. An apology goes out to Eunice as we did not bring enough gateway games to introduce to her and she left after the game. She has only done Carcassonne before. I know jack208 and hiew has been talking about not being too condescending to beginner gamers but sometimes you just don’t want to deluge others with a heavy game. And guys, do inform earlier if you are bringing a beginner friend so we can tailor the games we bring to the occasion.

Next we did Through the Ages. Lester had requested to play this game and I obliged by bringing it. 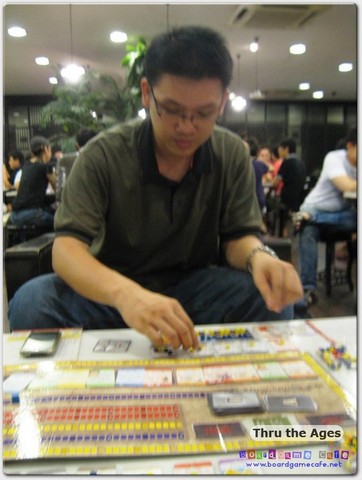 This game has lots of ‘cube-shuffling’ and various busy-work but it is still a good economic-engines game. After teaching this game to Lester, perhaps he can make a more informed decision as to whether to buy it or not! 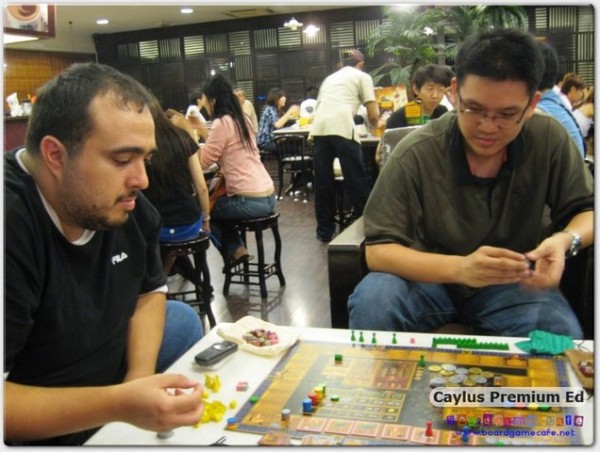 Cristiano then joined us for a late game of CAYLUS PREMIUM LIMITED EDITION! 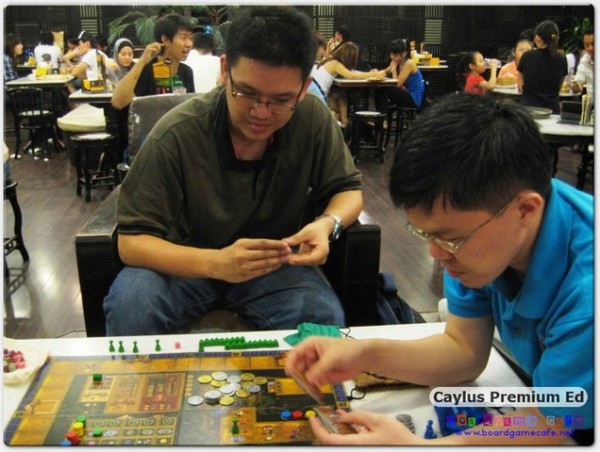 This edition has coins that go ka-ching! and complicated, indecipherable art. Hehheh.

Lastly Lester bid us goodnight as we continue with a game of Princes of Machu Pichu. I have to say that 2nd time playing this game is the charm. I can see the game’s ebb and flow better and I rate this game higher than Hamburgum. This is quite opposite from jack208’s rating and we agree to bring out Hamburgum next time to play and decide.

Overall, it’s been a quiet night, but sometimes the quietness does make the meetup more cosy and personal. Fortunately, or unfortunately, it’s not too quiet that War of the Ring (a two player game!) is needed to be called into service. Well, there’s always a next time!