This is one of Gamewright’s recent hit and a pretty darn good value for money given that you get a nice tin box with well produced cards and miniatures! All for less than Rm100!

According to waiyan, this game is similar in feel to Pandemic but more suited for a younger audience. Nevertheless it’s a good filler/starter even for gamers!

Nicely done cards for Forbidden Island. The way the cards are organized reminds me of Blue Moon City.

While the other gamers were engrossed with their game of Forbidden Island, I’d the luxury of time to read up the relatively short rules of The Speicherstadt, one of the latest game from Zman.

Apparently the word “Speicherstadt” means “warehouse district”. Not sure why Zman did not choose an English name for this game when they took over the publishing of the English version and as pointed out by Nicola, they probably might lose some sales over the name alone.

At it’s heart, it’s a bidding game with each player as wholesale dealer starting with just 5 coins and striving to make the best profit over four seasons.

In each round, players send their workers (you get three of them) to bid for the buildings/ships made available for that round.
The bidding is an interesting (and original) mechanic where the 1st player in-line has the option to buy that building/card for the price equal to one coin per worker in that bidding queue.

In the above example, Orange (the 1st in queue) can buy this building for 3 coins. Or Orange can choose to pass in which case Purple can buy it for 2 coins.
An interesting mechanic… and one which can produce lots of antsy decisions which many opportunities to mess with your opponents price by driving up his purchase price for a building/card he desires! Especially if he’s left with only 1 or 2 coins!
Couldn’t put it better than Li Li who said Stefan Feld (the designer for this game and also Macao and In the Year of the Dragon) has a twisted mind. 😛

The purpose of buying these buildings/cards are to form some combo to grow your trading business. Ships bring in goods (cubes) while merchant cards allow you to sell your goods for (much-needed) coins. This would be your basic economy engine.
The key is to fulfill the contracts which appear in three sizes: small, medium and large – each requiring different mix of goods to complete them. But they score high points if completed!

When this situation arises – all ships coming in to unload – you better hope you’d stash of coins available to go for the bidding!

We did this twice; the 2nd time with the Forbidden Island crowd.

On another table, waiyan did a few rounds of F.I.T.S. with her group of teacher gamers. Preparation for BoardgameKids? 😛

NAVEGADOR remains one of the fave “new boys” in town. Have only heard of it being played in the Taipan group and here so I guess the game is still new to our local market.
We did our first play at OTK last week (read sessrep here) and all were largely impressed with it’s gameplay and balance. Heng was one of the notably absentee from last week’s game and he made sure he get himself a seat for this week’s session. Did it meet his expectation? Read on…

We kinda figured out the first two book moves but like Puerto Rico with it’s first Settlers action, it takes nothing away from the game. The consequence of losing a ship for each exploration prevents an early runaway Explorer strategy.

Peter to Ken: Is this your rondel or mine? LOL

After my 2nd play, how do I think it stacks among Macs Rondel games? IMPERIAL still triumphs Macs Rondel design but Navegador is certainly a close 2nd.

Ang & Caleb scruntinizing the rulebook in order to explain to Nicola why his horse cannot be placed first in Horse Fever, another fine new game from an Italian game designer.
We’d our first play in OTK a few months back when Castor/Oon brought their copy (read sessrep here) and BGC is still waiting for the publisher to release this in USA before we are able to import the game in.

BOOM TOWN is one of the early games we played when we first got into this euro boardgaming hobby back in 2005/2006. As it was then not widely available in the local market, it kinda got lost off the radar.
When we heard news that it was republished by FRED, we quickly brought them back in.

It’s a card game themed around players acquiring gold mines – thru an unique bidding system where the bid money is redistributed back to the players! – in BOOM TOWN. The gold mines produced based on a dice roll not unlike Settlers of Catan.

You also get to become the Mayor of a particular town if you own more than 2 gold mines in that town. Peter has just made himself mayor in two towns! As Mayor, you collect an upfront fee from the other players when they acquire a new gold mine in your town.
Good money oh.. Especially if you manage to upgrade your status to Governor (which pays double)

Miners of course need some distractions after a hard day’s work at the mines. There’s the saloon and you can’t have saloon without the saloon gals rite? Hehe

What elevates Boom Town from your typical card game is the various screw-you cards that come out every now and then which allows you to do something nasty to the other players, including blowing up their most precious gold mine!
A game that plays under 30 min, lots of fun and easy to learn. Glad we got this back to the table again!
For more photos of this gaming session, visit our Facebook Album.
For more boardgaming reports, visit our Boardgamecafe.net Blog.
To discuss this gaming session, join us in our Facebook Page.
To buy the games played in this meetup, please visit our Web Store.
To view a listing of all games in stock, please visit our (blog) Webstore Listing page.
We carry over 400+ games and provide prompt and free delivery to anywhere in West Malaysia. Min order applies for free delivery. 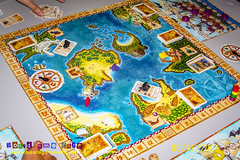 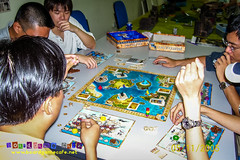 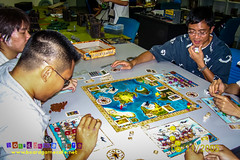