Finally, the sessrep on our 1st play of DUNE last week at OTK Cheras. Did it live up to its hype? Read on and find out what we all think of this (sadly) OOP game of treachery and betrayal… all for SPICE!

(left: Nelson, right: Blownfreaks) This day saw the return of Nelson back to OTK, unfortunately into the jaws of Age of Steam sharks. (pic: Afif) Afif, the other AOS newbie learning the ropes. (left: me, middle:kaz) I did what I normally do and secure the locomotive action early […] 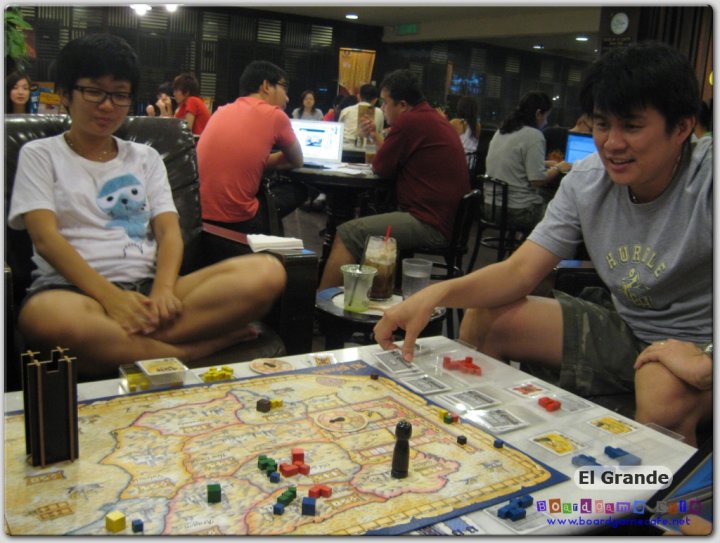 The game session started with El Grande. (left: Crabzai, right:Blownfreaks) Oldie but goldie. Played it only once before, still not doing great in this session. (left: me) I put many people onto my ‘court’ unaware that there are nefarious cards that can wipe them all out! We did […]

The gang starts with China – apparently this game was so easy that rhyen multitasked on his laptop while aycee multitasked on his hands-free… waiyan takes the game more seriously while explaining the rules to akmal (i hope i got his name right). I was busy eating while […]

A not-so-frequent session with the Pudu gamers after our usual CNY dinner get-together. We did Aladdin’s Dragons (which they liked) and Battlestar Galactica (which the Humans won due to divine intervention *tsk tsk*)

The overdue report of the session before-and-after Chinese New Year where we intro-ed Agricola to two newbies (using the K-deck no less) and Aladdin’s Dragons get another session, this time with the full might of the Magic Spells!

Dungeon Lords was played for the first time in M’sia. Find out what we think of it. Plus more moor farming in Agri-land till the wee hours of Sat morning.

The full sessrep for last Fri’s session where we did Small World, Chicago Express, Bang!, Powergrid Korea (covered in an earlier sessrep posted a few days ago) and Factory Manager.

Looks like it’s Friedemann Friese’s nite as we did two of his games… Powergrid and Factory Manager. The Korean map of Powergrid pose the interesting question of whether you buy resources from the North or South Korean market…. Read ayheng’s report of his winning session and pick up one or two Powergrid strategies from him. Also, find out what is “Powergrid Director’s Cut”. Enjoy!

Yes the report you’ve been waiting for! First impression of IMPERIAL 2030 from it’s very first play in Malaysia last Fri 22/1. Read on to find out how Imperial 2030 rates.

Another awesome OTK evening with 7 games played over 9+ hours. In addition to faves & oldies like Long Shot, Acquire, Perudo, we also did Monopoly Deal, Funny Friends, RA the Dice Game and open the shrinkwrapped on the latest IMPERIAL 2030.

Keeping with our momentum of doing new Essen games for 2010, we checked-listed another new game ie Spain & Portugal map for Powergrid. Read on to see how we rate it.

Guys, time to spice up your Marvel Champions!
The latest addition to the CATAN family... all in 3D glory! This is now in-store at OTK. Pick one up for Xmas :)
All hail the King!
Limited Edition. So buy before price appreciates :)
More new arrivals to fill in your Kallaxes!!