The event you’ve all been waiting for! Come… join us this July 17th, 6000 ft above sea level as we plan to spend a full day playing Euro boardgames in our BOARDGAME RETREAT!

As six leaders gathered their troops and resources to fight for the control of Mecatol Rex, a total eclipse of the Sun brought DARKNESS upon the entire universe. Find out how these six leaders maneuvered and fought in darkness in a game of Twilight Imperium 3.

After an intense one day fight, the hardcore gamers continued late into the night with heavies such as DUNE and 1856. In spite of the late night, all gamers assembled back on-time at Day Two to continue with more gaming rounds to conclude this hugely successful Euro Game Retreat! 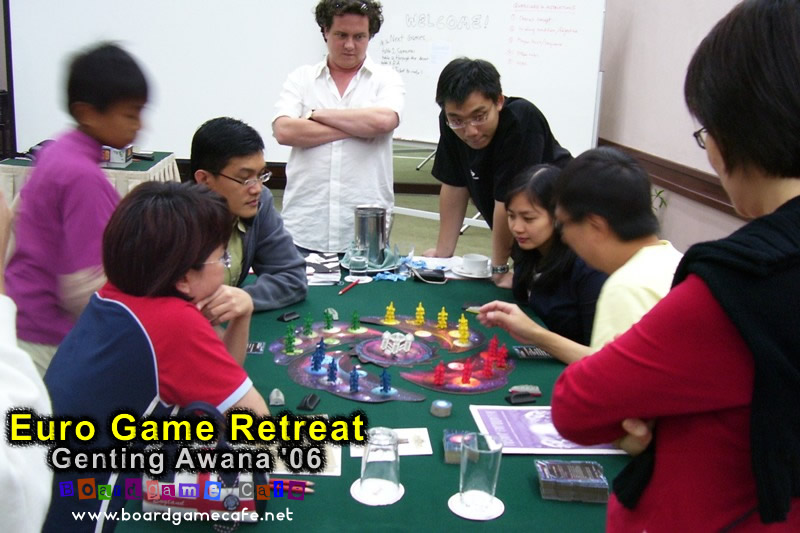 The 2nd part of Day One where 3 more rounds of 12 of the best Euro Games were played among 16 gamers to vie for table positions and points. Find out how they all fared after one intense day of 8-hrs of non-stop gaming….

16 gamers gathering thousands of feet above sea level, over two days and one night, and the opportunity to play a pool of 28 of the best Euro boardgames over 7 rounds of competitive play… where? when? how? Read about this in the very first Euro Boardgame Retreat conducted back in Oct 2006. Like what you read? Then stay tune for the next Boardgame Retreat coming soon in 2010, brought to you by Boardgamecafe.net! 🙂