EXCERPT
Here’s the 2nd part of our Game Two report for the BGC Retreat 2013. You’ve read about Glass Road, Legacy, Bruges and Artifact in part one. Now find out how the gamers did for Byzantio, Lords of Waterdeep and Cafe Melange; and who went into Game Three in the lead.

This game also seems to suffer from lack of availability in the USA but given it has a good Kickstarter campaign, and is also available thru Amazon / Funagain it should reached enough American gamers for a decent run.

In BYZANTIO, each player is the head of one of the main Byzantine dynasties vying for the ultimate power when the poor king just passed. You achieved that by garnering the most support among the cities of the empire.

The four would-be-emperors vying for the Byzantine throne was (from left / in yellow / clockwise) Bee Lan, Zhen, Seh and See Kei.

They played the Byzantine map – there’s the Nekken map on the flipside which allows a slight variation of the game in a fantasy setting. While you might be alarmed that the game plays over 30 rounds (?!), turns should move quickly as it’s rated as a 60-min game for the full complement of 4 players.

The key to winning the Byzantine throne is to garner the most support (points) in 7 cities among the 25 provinces. The trick is you need to decide on which 7 cities you are going to canvass before the start of the game, and note it down in your own player notes (above).

There are a number of actions one can take in each round – campaign, muster, negotiate, advance, bribe and expel  – and they are depicted graphically in the top left of the game board (above) as playing aid which I find useful.

While there are 6 actions available to you, they are not available ad-infinitum thru out the game. Each action is available to a player for a limited number of times for the entire game for eg Campaign is available 10 times, but Muster can only be used 6 times while Bribery (most powerful action) only 3 times.

Everytime a player takes an action, he (or she) marks it on his (or her) player note – see above – to track how many more times he (or she) can perform that action.

Gaining support in a city is simply having a bigger “muscle” presence in that city than your opponents ie send in your garrison to control it. There are points split for ties but hey, you are maneuvering for the throne of an Empire… why would you thinking of “tie”?

Above: Everyone’s trying to guess what each other is attempting to misdirect

Obviously gaining control of a city that’s NOT in your initial objective list of 7 cities is not going to score you points. Yet you do not want to disclose everything by doing the obvious coz if your opponents knew which 7 cities you are hoping to gain support, they can easily thwart your plans by controlling the city before you.

Espionage is also an element of the gameplay as you get bonus points if you are able to successfully deduce which are your opponent’s top objective city – err.. is that Red’s main objective since he seemed to be putting all his eggs (read: troops) in that area?

There are also Disaster events spread thru out the 30 rounds; and if a disaster – famine, earthquake, etc – befell the cities where you have presence, you’ll take loses.

Zhen (above) the eventual heir to the Byzantine throne thinking deep to misdirect all the other wanna-bes. He’s joined by See Kei for next round’s Bremerhaven.

Seh & Bee Lan would join Dith & DC on some fishy business in a salty ocean.

Do we have BYZANTIO in stock? Unfortunately since LudiCreations did not appoint an USA distributor or publisher, we are unable to pull any stocks. Last we checked, it’s still available from Funagain.

Next up, we have the only non-2013 games in this round ie LORDS OF WATERDEEP released in 2012.

This game probably need no further introduction. We think it’s a great gateway game to get gamers into worker placement games.

Four who wanted to be Lord, from left (blue) Sonia, Boon Khim, Matthew and Darryl.

Worker placement game, as simplified as possible in a fantasy setting. What more would you asked for? Well, wouldn’t mind the Scoundrels of Skullport expansion. tsk tsk. 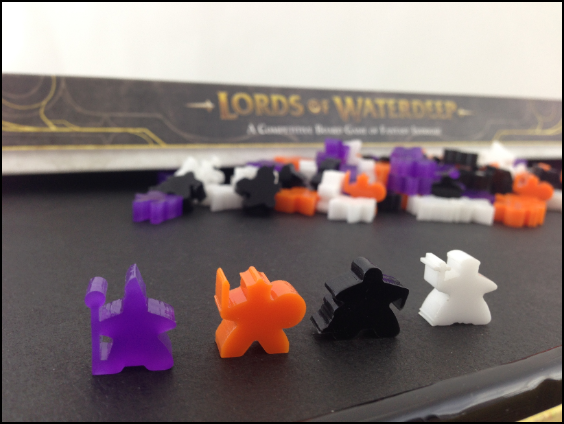 One common grumble is the generic cubes (that come with the game) do not lend itself to immerse in the fantasy theme. That’s easily solved now that the Kickstarter project (above) for custom acrylic meeples for this game has been successfully delivered.

da lady (Sonia) became the LADY of WATERDEEP. Her next adventure would be with Matthew in the island of BORA BORA.

Darryl and Khim would get the chance to evade customs and each other in the cutthroat smuggling business.

LORDS OF WATERDEEP and it’s expansion SCOUNDRELS OF SKULLPORT are both available from our webstore. If you are looking for a good worker placement gateway game and like the fantasy setting, pick these up. Both of them as the expansions add some good stuff to the base game.

CAFE MELANGE was a very low-profile new game from last Essen. But when I passed by Clicker Spiele’s booth, the artwork quickly drew my attention. After chatting briefly with Stephan (designer), understanding its mechanic and theme, I quickly snapped up a copy since the game scope would fit nicely into our Retreat.

For Game Two, CAFE MELANGE is set for Table #7 and we have Dith & Lili joining Ong DC & Shu Wen after Game One.

CAFE MELANGE has a similar flavor with CAFE INTERNATIONAL. In MELANGE, your objective is to place your guests with prominent individuals such as Freud & Mahler. You score points when you managed to sit your guests with the VIPs.

To decide where you can seat your guests, you need to play a set of cards depicting the chair type, table shape and table color. This three combination would allow you to uniquely identify a seat in the cafe where you can usher your guest to.

Above: Your player board where you play up to 3 cards to determine your guest’s seating. The blue tiles are your remaining guests. Everyone starts with 6 guests and the game is over when 21 guests are seated in the cafe.

The wood tokens (cyclinders, cubes) were used to mark “possible” seating locations for your guest. As you play more cards (chair, table color/shape) to your board, the number of possible seating locations would be reduced… until one (which is where you’ll get to place your house guest).

Some of the guest tiles on the board (those in light background) would be the famous personality tiles – they are the score multiplier. You only score VP if you have house guests seated on the same table as them (which is where you compete for the right cafe seats).

Above: An overhead shot of Table #7 with CAFE MELANGE in session

Looked like the guys trumped the ladies in being “more kiasu” in getting their house guests seated next to the VIPs. Dith (left) & Ong won this session and would be moving to Table #6 for Game Three.

Above: Stephan Riedel (left), the designer of CAFE MELANGE with CK at last year’s Essen Spiel 2013.

Only 900 copies of CAFE MELANGE were printed and according to Stephan, he’s not sending his game to the big boys. Which meant it won’t be widely / easily available for purchase. Boardgamecafe.net to happy to know that we’ve not only brought over copies of CAFE MELANGE for re-sale in Malaysia, but have featured Stephan’s game in one of our Retreats. 🙂

CAFE MELANGE (limited units) still available from our webstore. Click on link above if you wish to get a copy for yourself.

That looked like a wrap for Game Two. Even though the games we’ve picked for both Game One and Game Two were 45-60 min length, we were running badly behind time at this juncture.

Above: The 7 game titles done in Game Two; 6 of them being last year’s Essen 2013 releases.

Time for a coffee (or tea) break for the games to take a break, while we tabulated the score and re-set the tables for Game Three.

After two scoring rounds, we now have a couple of front-runners at 7 pts. The format of our world cafe system meant one does not have to be in Table #1 to score the points. You just need to win at the table you were assigned. For those who do not care much about the points, they’ll enjoy the rotation as they move among the tables and get to know / play with different set of players.

Moving out to the open area has been a blast.. more room, better flow of air and lots of natural light. Stay on for the next sessrep as we get some Essen hot games to the table namely Caverna, Bremerhaven, Bora Bora, etc