Junyet here. OTK was supposed to be canceled that night.  Special thanks to CK who managed to organize this meetup despite their busy schedule!

That night we saw many familiar faces from BGC Boardgame Retreat – Emil, Wong, Kareem, Nurul, and a few others!

JC: I was extra extra happy that CK and so many others showed up because Jun yet and I had to go back to JB and we won’t be able to make the next OTK. I was so surprised that so many people showed up :O! Thanks CK and Wai Yan for coming and we played until Wai Yan’s birthday at 12:00am, 3rd September! Happy Birthday Wai Yan :D!

Emil the bully teaching the game. Airline Europe is a game where players invest in airline companies and score accordingly when each of the 3 scoring cards buried in the deck were flipped open. I like games with shares. 😀

I started by focusing on developing Grey (Fantasy Flight) airlines. Smaller companies have smaller amount of planes and hence limited amount of route one can connect; but it compensates by having special bonuses if you manage to connect the flight from the starting city to another designated city on the other side of the board.

JC: I on the other hand just kept on attacking the Green shares until it ran out of planes and Emil who was smart enough to see my tunnel vision, put down only one Green share to get loads of points! (As he was the only person with Green down)

Speaking of which, all the supposedly airlines companies were named after existing game publishers! That’s really cool. According to Emil the size of the airline companies (number of planes available) is even consistent with the actual relative size of game publishers.

JC: Haha! Towards the end of the game, there were so many planes on the board that I was seeing stars!! I absolutely love the planes :D! 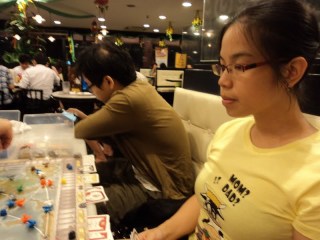 JC: At this point, the Green marker isn’t visible on the board because I pushed it to the other corner of the board.

On hind sight, I should’ve diversify with more shares but my luck gave me Red and Black which not many people invested in whereas Jun yet and Emil invested in many many shares which gave them lots and lots of points! 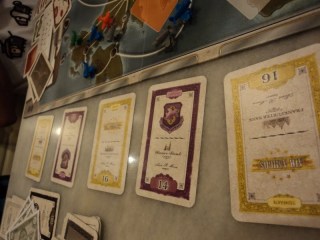 The so-called “junk shares”. This combination of shares stayed on the table for quite some time – nobody wanted them! Wong started the game by dropping 4 yellow shares. Nobody else bothered to help develop that company because he’s the major shareholder. 😛

My Rio Grande shares. I’ve been collecting the blue shares for many turns *evil laughs*. Not a secret, but still.

The highlight of the game for me is probably when I pulled off a hostile takeover of Rio Grande when the other players were busy converting their shares into Air Abacus shares.

JC: Yes! Jun yet was very quietly building his blue shares in his hand as Wolfx had about 5 on the table and SUDDENLY! POW! Jun yet became the major share holder of Rio Grande shares!

Despite all our efforts of building our own airlines, still we were no match for Emil’s 104 pts. Wow. He piggy backed on our efforts! He scored his first 50 points when I only had 35 pts. Bully! 😛

Thoughts on the game:

There were only two downsides to this game

All in all, I really like the game :D!

After Airlines Europe, we had 10 players (yay!) in OTK so we divided into 4-6. Troyes (or Troaaa/ tʁwa) was brought onto the table.

I found the description of what Troyes really is.
Yes I Googled how to pronounce Troyes.

“A city of northeast France on the Seine River east-southeast of Paris. A pre-Roman town, it was a prosperous commercial center in the Middle Ages and was noted for its annual fairs, which set standards of weights and measures for all of Europe. Population: 60,000.”

Seems like the group really enjoyed the game. Bursts of laughter were heard from their cubicle from time to time. One of the memorable moments was when Emil dealt with the smallest Marauder (black) dice on purpose, leaving Nurul with 2 black dices with big numbers. Judging by the level of fun they were having when that incident happened, I presume Nurul was already getting bullied prior to that and she had to sacrifice her precious few dices to deal with the external threat!

CK teaching the game without even referring to the rulebook. Interesting how experienced gamers like CK, Emil, Kareem have the rules for a gazillion games already uploaded into their brain. :O

A preview to CK and Kareem’s dominance in the game. Actually, it was a great idea to start in major cities – more goods to deliver! I started in a city near the middle of the board and hoped to branch out to connect other cities, but the downside was that I was unable to do long-distance delivery consistently.

JC: I on the other hand, focused on one tiny corner on the left. If you look really closely at the picture below, you can see two little purple markers, that’s me!! On one hand, I’m glad I went to the purple areas because I thought it was better that purple was scarce but it works both ways.

Less people take your goods but on the other hand, you kinda run out fast as there are limited amount of purple near enough for you to carry around.

Early game – Kareem (red) is building up his epic rail from east to west. CK on the other hand had a even more impressive loop in the east. Okay, we’re doomed. 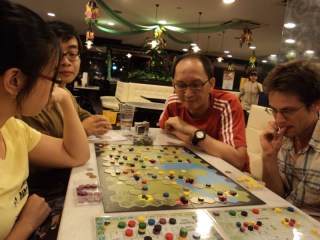 Gameplay towards the end was quite intense as there was less and less land to build rails on. CK blocked Peter’s ambition of monopolizing the railway to the distant black/grey city! (as seen in the top corner of the picture below, next to the lake)

JC: I do enjoy watching CK play as he is able to do whatever he wants yet he was able to mess with both Kareem and Peter! I’m a person of tunnel vision so I just make sure to build my tracks (since we can only build 3 a turn).

Ang (black) specializes in building complicated rails which goes under/across/over other people’s rails. That was quite interesting, I never knew you can do that. He managed to connect the yellow city to the purple city in a already congested land. It cost him quite a bit of money, though.

Peter: I hate train games. Especially when CK is playing!

CK was the first to make profit (revenue minus cost to maintain engine and dividends for shareholders) in round 3 or 4, followed by Kareem. I only managed to break even later.

JC: Yeah! CK was flying in front of all of us! Thank goodness there is the “Catch the leader” mechanism where people in front get deducted more points than the people at the back. These mechanism helps newbies like me most :D!

The last turn of the game -Ang (black) issued so the most shares in the game. It came with a penalty though, so it has a huge impact to the final score.

Actually he scored so much that he went one round ahead of us, with 61 pts in the end! Kareem (red) was right behind.

JC: Haha! I was tempted to give the impression that blue and red was last but I put an extra marker on CK to show that he went around the scoring sheet twice and Kareem did so too hehe!

Something random interesting things to note: 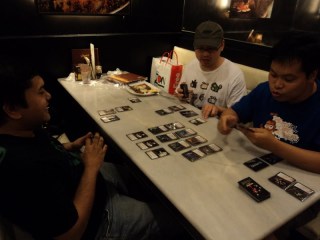 Nurul was leaving after Troyes, so the 3 guys proceeded with Nightfall. A deckbuilding game with horror/vampire/werewolf theme.I have yet to try this game! 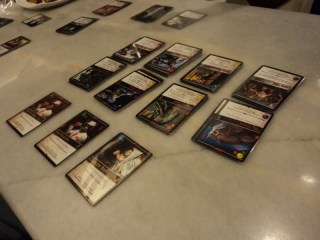 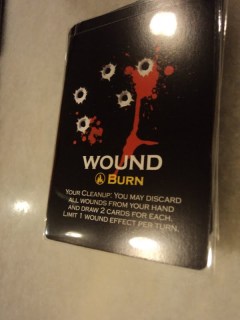 Jacelyn and I left soon after that, and I heard some ideas about bringing Battlestar Galactica to the table! Wish we could have stayed!

That’s all for the sessrep, folks, see ya around!