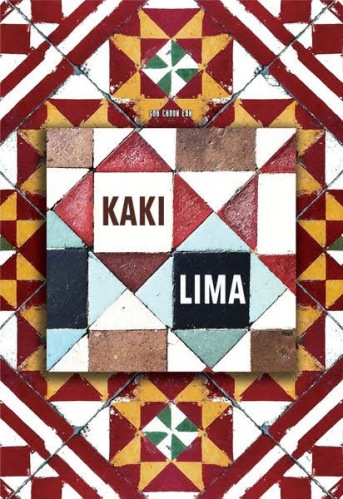 The Game
Kaki Lima is a Malaysian design, and is set in Georgetown, Penang (Pulau Pinang).  The term kaki lima refers to the five-foot way or walkway in front of the old shops in Penang. These are covered walkways. If you get caught in the rain you can take shelter here. Some hawkers set up stalls here too.

I was fortunate to be taught the game by Choon Ean the designer herself. We played on Tabletopia.com. The components are slightly different. We have discs for characters and not standees. When setting up the game, you lay all location cards out in a 10×5 grid, leaving four empty impassable spots on rows 2 and 4. Everyone is dealt a mission card, which lists the locations you need to visit and how many points you will score for visiting each of them. You can decide the starting location of your pawn after looking at your mission card.
On your turn you play cards to move your pawn. Cards have various values and special abilities, e.g. some cards allow you to combine their values with those of another card. When you play your card, you must move the number of steps specified, no more and no fewer. You may not retrace your steps either. By moving about Georgetown, you will fulfil the missions on your mission card, and also do various other things which score points. Once any player completes all missions on his mission card, the game enters the final stage. Everyone takes one more turn, and then the game ends.

That in the middle is a mission card. The point values vary from 2 to 6 points. The high valued missions usually require you to be at a location together with another player. This at first seems strange. Why would anyone else want to help you complete your mission? One mechanism in the game allows both players to score points when they meet at a meeting point. There is also a mechanism for you to offer a ride to another player when you are en route to a meeting point. The other player being offered a ride may decline, but if there are points to be earned, he may be happy to come along. It can be win-win.

Location cards with yellow borders are destinations. They grant various bonuses when you visit, e.g. taking an extra turn and clearing a blocked path. Green bordered cards are regular pathways, while red ones are blocked pathways, i.e. impassable. If you clear blocked paths, you will score points at game end. Depending on how many have been cleared by everyone collectively, you will score a bonus. This creates an interesting dynamic among players. If nobody bothers with clearing blocked paths, the points for doing so is not particularly attractive. However if many people do it, the bonus can become lucrative.
The locations are all real places in Georgetown. Not all are tourist attractions. Many are just everyday places people go to, like the wet market, the local branch of a bank and food stalls.

These are objective cards, and most specify a list of locations you need to have visited in order to claim them. They are given out on a first come first served basis, so you need to compete with your opponents.

The score board is pretty.
The Play
The first thing I paid attention to when playing was the locations on my mission card. If they happened to be nearby it would make my life much easier. I needed to have a rough plan how I was going to fulfil them all. I started drawing out an itinerary in my mind. Not set in stone, mind you, just a rough guideline. Having some destinations being far apart is not necessarily a disaster. Some card combinations let you move far, e.g. there’s a card which doubles your steps.
The second thing I paid attention to was the objective cards. I needed to find those which overlapped somewhat with my mission card, so that I could focus on them. These would be low-hanging fruits. The mission cards are a form of countdown controller. You trigger game end when you complete your mission card, so the players have some control over how quickly the game ends. If you command a strong lead, you probably want to rush and complete your mission card as soon as possible, catching your opponents when they are unprepared. If you are falling behind though, you will need to find other ways to catch up before they do the same to you.
One important way of scoring points I had grossly underestimated was the meeting points. Some location cards are categorised as meeting points. If two or more players meet there, they all score points based on the number of steps they have taken to get there. When you see someone from across the board landing on a meeting point, if you happen to have the right cards to bring you all the way there to meet him, you are going to score many points for that long trip you make. Yes, you will help him score points too, but if he has just taken two steps to get there, you will be more than happy to give him those 2 points. You have to be watchful not to give others such scoring opportunities too.
Meeting up is sometimes win-win. You probably want to make use of it to create collaborations. By having the hitchhiking mechanism, the game encourages you to create meet-ups with other players. If you can do many meet-ups with many different players, while the others don’t do this much, you will gain an advantage. This is very much like trading beans with many people in Bohnanza. Players who isolate themselves from such collaboration will lose out. 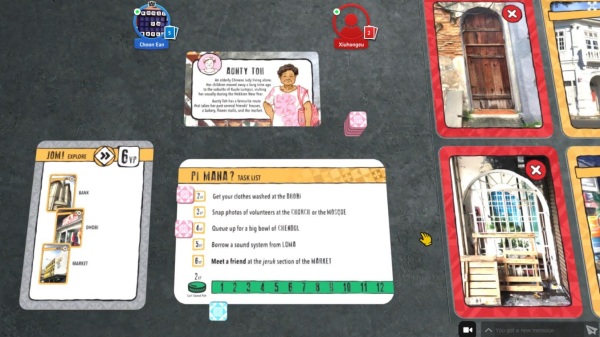 The character designs are flavourful. There are no unique character abilities. It’s just different artwork and backstory.

The photos on the cards are all real places in Penang. This is great as a souvenir for visitors to Penang.

Player cards all have special powers.

The hand limit is 5. You always draw 1 card at the end of your turn. Some locations let you draw an extra card. 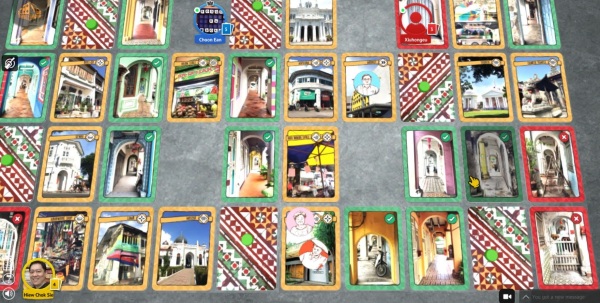 When we cleared blocked paths, we flipped the card over and placed a green token on it.

Prior to playing the game I had expected a very light game. Kaki Lima turned out to be a little meatier than I thought. I’d categorise it as a medium-weight game. It’s not that complex. Every turn you are just playing cards to move your pawn. However there are quite a few different aspects you need to keep in mind in order to score points efficiently. You need to remember the missions on your mission card and the locations on the objective cards. You need to watch out for meet-ups. You need to consider whether to clear many blocked paths for the points. The location cards all have powers. There are only a few types of such powers, but it’s still something you should consider when you plan your move. For an innocent tourist who has not played modern boardgames, these can take some effort to digest. There are many unique location cards, and it takes some effort to map out this randomly generated Penang before you start your game.

Kaki Lima is a game with plenty of local flavour. I like the artwork and graphic design and they certainly remind me of my trips to Penang. If you have friends who have visited and like Penang, this is certainly a game you can recommend to them.