The Game On Lah event organised by Locco ran for two days, 27 – 28 Nov 2021. This event promoted boardgames designed by local Malaysian designers. I was able to participate only on Saturday the 27th, since I had another commitment the following day. My goal in participating was to see how the general public (i.e. non-gamers) responded to Dancing Queen. Throughout designing, playtesting, tweaking and submitting the game for the contest, most people I had managed to playtest the game with were gamers. I didn’t manage to get many non-gamers to try it out. So this event was a good opportunity for me to test a different segment.
The event ran from 11am to 6pm. I arrived around 9:30am. I had much more time than I needed. All the preparation was done in about half an hour. I brought a portable speaker, and throughout the day I played songs from ABBA, Queen, Boy Zone, Spice Girls and Cranberries. These are groups which appear in the game. 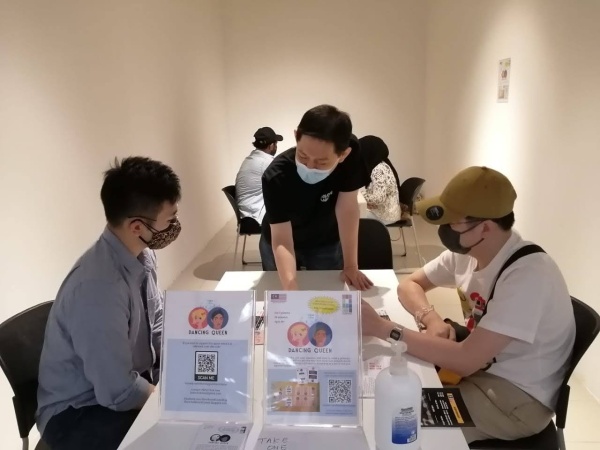 The venue was GMBB Mall, a relatively new shopping mall in the Kuala Lumpur city area, opposite Tung Shin Hospital. This mall specialises in artsy stuff and cultural events. There was not much crowd on Saturday. In the morning and around noon, most people who came to play were other designers who also showcased their games or gamers who knew of the event. There were slightly more people in the afternoon. I had only two tables at the shop assigned to me. I estimate about 80% of the time at least one of them was occupied. In the late afternoon most of the time both were in use.
By observing how people played Dancing Queen, I learned a few things about how I could teach the game better. Some players still forgot to pass the microphone before drawing a card. This is something I still struggle with. I have considered removing this rule, since it’s often hard to remember. However this rule has strategic importance. Whether to draw a card is an important tactical decision, and whether the microphone is being passed is an important consideration. Maybe I just need to find a better way to help people remember to pass the microphone.

I invited friends to be my helpers – Eva (centre) and Ai Shiang. If I were alone the whole day at the shop, I would have difficulties taking toilet breaks and eating lunch. I would need to ask designers from next door to guard the fort for a while. Having a helper also meant players at both tables could be attended to at all times. 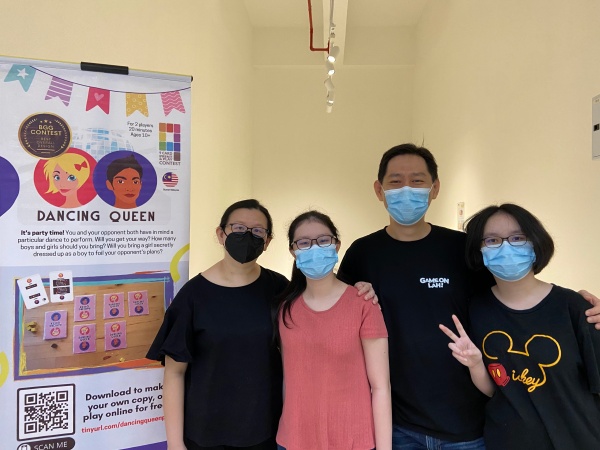 My wife Michelle and daughters Shee Yun and Chen Rui came to visit in the late afternoon. Once the event wrapped up for the day, we went for dinner nearby to celebrate.

The shop unit was a little small. It was a deep but narrow unit. I could only fit two tables comfortably. Adding a third would make the place cramped.

This was the first time I showcased my game design at a public venue. I learned something from this experience so it was worth the effort put into preparing for it. I had actually brought two game prototypes, Police and Saikoyu, but unfortunately did not have the chance to teach them to my visitors. These are simpler games and are probably more suitable for casual players compared to Dancing Queen.
Dancing Queen is not the kind of game casual players can quickly grasp and enjoy. I don’t think it can be a mass market game. Gamers can quickly pick up the rules and appreciate the intricacies. As they play more, they will discover further depth and new tactics. Non-gamers will need some effort to digest the game. I think a successful mass market game needs rules that can be taught very quickly. It should not have many rules, and most of its rules should feel familiar to the target audience. Dancing Queen has a number of unusual rules, e.g. how cards are played face-down and how the orientation of a card determines whether it is a boy or a girl. The passing or end-the-round mechanism also takes some explaining. It’s not exactly a hard game to learn. Both my helpers are non-gamers, and they managed. It’s just that it is not the kind of game non-gamers can pick up within a few minutes and have their eyes light up.

Tagged as: Events, Game Design, Made in Malaysia

Alrite just as we cleared out last week's #boxtrolls their next battalions are upon us!
ANKH KS Edition, limited copies RM1,399. PM us if you want to get one now.
For those who love gorgeous looking games... TANG GARDENS are now back in SEASONS next month! Dun miss it.
Two GAME BREWER Kickstarter titles are in.... those with preorders will be hearing from us soon. If you are doing pickup, don't have to wait for our msg, just whatsapp us direct (as we'll be facing another wave of #boxtrolls next week).
Expansions add legs to your game. Rediscover PIPELINE with the EMERGING MARKET expansion, both now in-store.