As I was preparing to pack my games to move to our new “home”, I thought this might be a good time to inventorize them and give an update to my list which I’ve not been doing for some time. 😛

Let’s start with the “1” list ie. game with titles that begin with numbers.

10 Days series – Surprised to see I’ve all four of this series, missing the only fifth set ie. 10 Days in the Americas. Maybe becoz BGC has not yet stocked it? 😛 Anyway if asked, I’ve to say 10 Days in Asia would be my fave. Thing is.. I dun get to play these often. I understand the crowd at Joshua’s group loves this series. Need to make a point to get it to the table more. I suspect the cards in my set is not even laminated yet. *haiz*

1960: The Making of the President. Who doesn’t love to be the most Powerful Man in the world? Even if it’s only for an hour or so. Have had this game for some time and it’s only as recent as late Dec that I managed to get a session with Nicola (a visiting gamer from Italy). It also happened to be his first session on 1960.

Two great President wanna-bes squaring off for the first time in the Presidential Election. The outcome? Check out the sessrep on this first 1960 session at OTK Cheras.

It borrowed mechanics from Twilight Struggle but plays at a much lighter pace. I would say while Twilight is a better game to play with your mates, this game is better with your spouse. 🙂

7 Ages. Civilization-type games tend to have an unexplained pull on gamers like us. Perhaps inside all of us is the need to satiate the megalomania hunger. And we all think we can build a better “world” than the past leaders. Hmm.. then why are we here doing mundane things like writing a blog entry?

This was a niche game produced in small quantity back in 2004 by a small game publisher in Australia. Not sure if they are still in business (and this is not implying the game is crap). 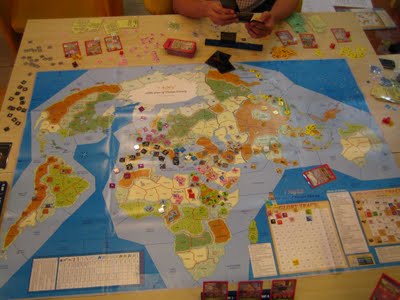 This game was certainly not targeted at the mainstream gamers market. It’s fiddly. If you think Puerto Rico is fiddly, then step away. J It has the most convoluted rule book you may have ever read (and even the various player aids uploaded to Boardgamegeek ain’t helping much).

Yet gamers ran to it like drones to magnet. Perhaps the allure of being able to play thru all 7 Ages (with each age averaging 2 hrs, you are looking at a 14 hr game, yeah?) from 4000 BC to 2000 AD spoke to their deep desires. Or gamers are really people with a lot of free time on their hands.

I was encouraged when I read that some of my gaming buddies (Hiew, Han, Sean etc) has actually played a session of this back in 2009 at Carcasean Cafe (KK). Technically they played only 3 ages and that game lasted 7 hours o.n.l.y. Hiew is a well-educated and mild-mannered gamer and it’s not often he used vocab like “bloody” in his game report. This is one of those exceptions. 🙂

So it’s like “half a game” but okay la… they are probably the only living human beings in M’sia I knew of who had even attempted the game. The rest probably opened the box, looked at it, closed back the box and put it back on the shelf. Took all 7 minutes. Clap clap clap.

Let’s see what Hiew thinks of the game.

“There is a lot more to the game, and you’ll really need to experience it to appreciate how rich the game is. Here are how our two games went.”

When he said “there is a lot more”, I think he meant it’ll take another 10 hours to finish. LOL. But wait.. they played two games?? Those buggers!!

Anyway looking at the size of the tables, I’ve to say there’s no way I can get this game to the OTK Cheras table. Hehe.. excuses are needed when you dun have the balls to put the game on the table!

Yes waiyan? Oh you mean the new place has a 6+ ft table that can fit this? Does it? Ah I see.. But anyway let us not digress… the reason my set was not yet played was… ah.. nvrmind. :S

(I told you my set was unplayed right? So how to take pictures for you. Aiyah.. It’s in “Like New” condition so if I’m going to hawk it off ebay, it’ll fetch good price one day.. unlike Han’s copy.. played liao)

Yup, that’s all for my “1” list. The notable absentee here would have to be 7 Wonders. I’ve played this a few times, courtesy of our Card Shark Kareem, including the Leaders expansion.

Quite nice, fast playing but like Race for the Galaxy, Dominion, etc card games like these do not pull me in. I won’t mind playing when it’s brought to the table (esp 7 Wonders) but it’s not a game I’ll be rushing to add to my library though I suspect it’ll eventually end up there one fine day. We all wonder…. 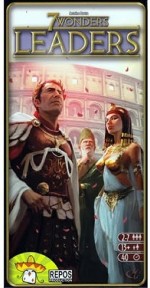 7 Wonders and both the Leaders & Cities expansion are now added to my library. 🙂

20th Century. Have also added Czech Games’ medium Euro on city building to the game library. This is from Vladimir who also did Shipyard and Last Will. Maybe time to call for a Vladimir Theme Nite @ OTK.

51st State and it’s Winter expansion. A futuristic card game set in the world of Neuroshima Hex. Looks good and I heard from frens play equally well. It’s WINTER expansion released last Essen (2012) looks as inviting. If you are card fan, do check them out.

Tell us which one are your favorite games from the above? Discuss here.
Click here for the full list of boardgames in Jack208’s Library.

Check out the list of “1” games as available from our webstore.

ABOUT CK (a.k.a. Jack208) (add me in facebook)
One of the trio who sits on the Council of Boardgamecafe.net and a boardgamer by choice ever since he saved up for his own copy of Monopoly donkey years ago, and fell in love again when he got re-acquainted with Acquire. To get around the question of why he needs to buy so many games, he told his wife they are going into the boardgame business. Well, he did step into the boardgame business so try not to believe every single word he writes here as he’ll also try to sell you the games! When not doing anything with boardgames, CK hits the road running 10K races and hopefully would make a return to squash soon.