The Game
Stained Glass of Sintra is the second of three games in the Azul series. I have played the other two and enjoyed them both. So I was not going to pass up the opportunity to play this one.

The mechanism for claiming tiles is similar to those in the other games of the series. At the start of a round, you randomly seed the discs with four tiles. On your turn, you may take all tiles of one colour from a disc or from the centre of the table. When you take tiles from a disc, you move all the unclaimed tiles to the centre. So tiles will keep accumulating at the centre. The first person to take tiles from the centre is penalised. As a consolation though, you get to be start player next round. A round ends when all tiles have been claimed.

Each time you claim tiles, you have to place them on your player board. The top half of your player board is made of eight window strips, randomly arranged every game. The bottom half is one wide piece with eight doorways. Tiles you claim are used to fill the windows. You have a pawn above your player board. It starts the game at the first (leftmost) window. You may move it rightwards at any time. Whenever you place tiles, they can only go to a window below your pawn, thus the need to sometimes move it to a suitable window so that you can place tiles. Based on this photo above, if I claim three pink tiles, I can’t put them in the first window, because that’s to the left of my pawn. Instead, I will probably move my pawn one step right, then place those three pink tiles in my fifth window.
On your turn, you only have two options. The first one is to claim tiles. The other is to not claim tiles, and instead move your pawn back to the leftmost window. This is the only way your pawn ever moves left.
Whenever you fill a window, you pick one of the tiles and move it to the doorway below. You discard the other four tiles. You score points as indicated below the doorway, and every window to the right that has been scored before scores again. You then flip the window, because you still need to fill the other side. The window is only completed after you fill both sides. Only then you will remove it from your player board. 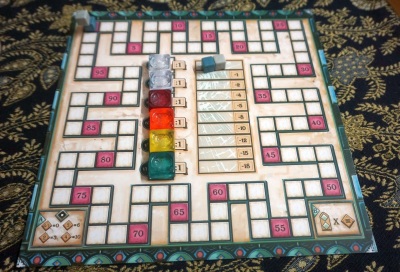 The game is played over 6 rounds. From Rounds 2 to 6, a different colour will be assigned as the bonus colour. For Round 1, the bonus colour is randomly assigned. Whenever you complete a window, if it has tiles in the bonus colour, you score 1 point per such tile.
At the centre of this board you can see the penalty table. Every time you are penalised your marker moves down one step. The penalty gets more severe the further you go. The first player in a round who claims tiles from the centre of the table is penalised. Whenever you claim tiles and are unable to place them, you are also penalised for each such discarded tile. 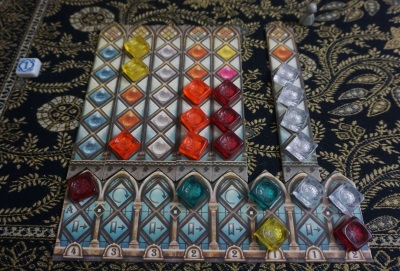 At this point two windows had been completed and had thus been removed. At game end, there is an end game scoring. There are two ways to play this, and you pick one before starting the game. In this game, used the first option. The doorways are grouped into four pairs with four spaces each. For each pair, if you have 2 to 4 spaces filled, you earn 3, 6 or 10 points. 10 points is a lot. In this photo, my rightmost group had 3 spaces filled, so I would want to fill in the last one to score 10 points.
The other way to do end game scoring looks at your number of completed windows, this is 2 in this example. You also look at the colours of the tiles in your doorways. Pick a colour with the most tiles. In this example it would be 2, whether you pick red, white or green. Multiply these two numbers to get your score. In this example it’s a paltry 4 points. I would not be playing this way if we were using this scoring method.
The Play
Despite sharing the same tile claiming mechanism, Stained Glass of Sintra feels rather different from its siblings because of how the player boards work. Every time you complete a window, all windows to its right score again. To maximise this, you would complete the rightmost window first, then gradually work leftwards. However to do this means you need to choose to reset your pawn frequently. Resetting your pawn costs you one precious turn. This is a dilemma.
If you want to minimise resets, then you would want to move your pawn as slowly as possible, filling your windows patiently and gradually from left to right. That is not easy to do, because the tile availability will rarely align well with your player board. You are torn between conflicting needs. Sometimes when there is a good opportunity to grab many tiles at once, you may have to move your pawn many steps to position it at the right window which can take that many tiles in that particular colour. Sometimes you may not even have such a window, and if you were to take those tiles, you would end up being penalised.
Managing the timing of your reset is important, and one reason is to avoid missing opportunities like the above. You know that as your pawn moves right, you will have fewer and fewer options. You can only use windows below your pawn and to its right. You often need to deliberately plan your reset.
The reset is sometimes good. Sometimes it buys you time. If you get into a situation where any set of tiles you take will lead to a penalty, doing a reset gives you a much needed break. Other players may take those tiles you don’t want. You may be making some of your windows available again, thus saving yourself.
I found it challenging to coordinate completing windows with the bonus colours. I think it’s a nice-to-have. Do it if the stars happen to align, but don’t force it too much. This game mechanism does give you a bit more to think about. No one minds a few extra points here and there. It’s just that it may not be worth the effort centring your strategy around it. The end-game scoring though, is something you want to plan ahead for. That takes conscious effort if you want to score anything half decent from it.
You can decide to play with or without keenly observing your opponents. Naturally if you watch your opponents, you will do better. You can grab the tiles they want. You can delay taking tiles you know they don’t want. If you feel competitive, by all means be so. If you just want to relax, the game is still enjoyable when you just focus on your own needs. It’s an adjustable depth game.
The Thoughts
I am pleasantly surprised that the three games in the series give me significantly different experiences, despite how similar the tile claiming is. The player boards make all the difference. Player interaction is all centred around the tile claiming. If you look for different types of player interaction, then you won’t find them. However the different player boards and and how they work do give you different spatial experiences. They are all great family strategy games.
Comparing the three of them, I find Summer Pavilion more forgiving, because you collect tiles into a batch and only then decide how to allocate them for placement. You also have 4 holding spaces to hold tiles for the next round. There risk of penalty is less. However you may enjoy the excitement and urgency of the penalty mechanism. If you want that, go for the original Azul or Stained Glass of Sintra.