Nidavellir is a simple game about collecting cards. The backstory is that you are dwarf chieftains putting together armies and hoping to be picked by the dwarf king to become the dragon-slaying expedition force. To get picked for this prestigious mission, you must assemble the strongest army. Most cards in the game are dwarfs in 5 different professions. Their strengths are calculated in different ways. You play 8 rounds, and normally you will recruit 3 dwarfs every round. 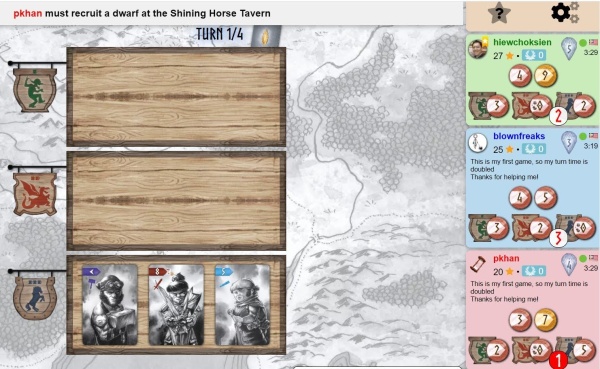 There are three taverns in the game, and you recruit dwarfs here. When a round starts, cards are drawn and the taverns are filled. Every player secretly places a bid at each of the taverns. Taverns are resolved one after another. Whoever has bid the highest coin gets to pick a card from the tavern first. The player with the lowest coin will have no choice and can only take what is left. 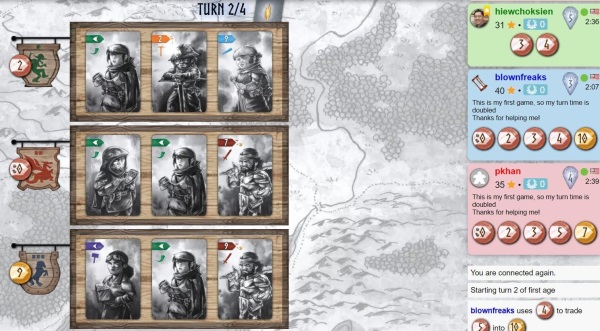 This royal treasury shows all the available coins to be upgraded to. Quantities are limited. There is only one each of coins $15 and above. In case the coin you are supposed to upgrade to is not available, you get to take the next higher coin. Sweet! 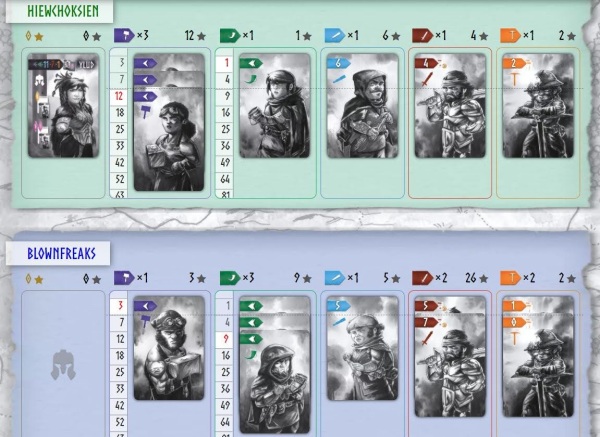 Normally when you focus on getting many dwarfs of the same profession, you get much better returns on the total strength. Going deep is good. However, the game also encourages you to go wide, because whenever you have a set of five different coloured icons, you get to immediately recruit a hero for free. Heroes are dwarfs with special powers, and most of them are very handy.

The special ability of this hero is you may transform her to be of any of the five professions at the end of every round. If you are only short of one colour to make your next set of 5 icons, she will be useful.

This was Han’s hero. With this hero, he could wait until Allen and I revealed our coins used in bidding before he decided which coin of his to use. This was very useful. He could save his strength and optimise the use of his coins. However he still needed to spend effort to upgrade his coins. If he didn’t have powerful coins, knowing what coins we had wouldn’t be helpful to him. He wouldn’t be able to outbid us anyway.
When you complete the first half of the game, there will be an inspection done by the dwarf king. For each of the five professions, if any player has more icons than everyone else, he gets a special bonus which he can use for the rest of the game. This inspection event is quite important. The first half of the game is like a preliminary round, and the second half is where things truly get interesting.

At the end of the game, in addition to your dwarfs in the five professions, some non-profession-specific heroes contribute strength, and your total coin value also contributes strength. The player with the highest total strength wins.
The Play
Nidavellir is a set collection game. You collect stuff throughout the game, which contribute to your strength in different ways, and victory is determined only at the end based on total strength. There is no point scoring during the game itself. The king’s inspection at mid-game is a form of reckoning, and it is important, but your strength only matters at game end.
Since everyone gets roughly the same number of dwarfs in the game, the key to getting on top is how to create effective combos with your dwarfs. You need to balance between depth and width. Depth is good because the more dwarfs you collect of a certain profession, the more strength each additional dwarf will be worth. However width is also important because every set of five different professions gets you a free hero, and heroes are powerful! It seems to me width is more important in the early game, because you want to grab heroes to help you. You only prioritise going deep later on after analysing the situation and your opponents, and deciding which professions you want to go deep with.
There is plenty of player interaction. You are not only collecting dwarfs based on your own needs, you must also pay attention to what others want, and try to deny them. Your highest coin is usually reserved to compete at the tavern you are most desperate to win. Upgrading coins is important, not only to help you compete, but also for the game-end strength. Money is power. If you have the highest coin in the game, you are guaranteed at least one dwarf that you want every round.
There are many heroes and many different special powers. On the first play this is overwhelming. The heroes are the fun part of the game, spicing things up greatly.

I (green player) wanted to focus on the blacksmiths (purple dwarfs). One of the heroes I took came with two purple icons. 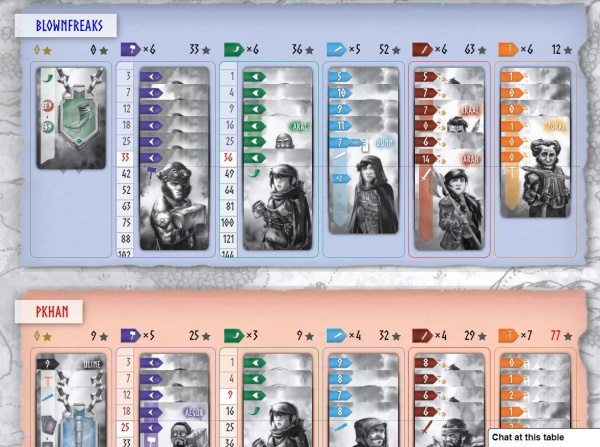 Miners (orange dwarfs) give strength based on the sum of their card values multiplied by the total number of orange icons. Allen (blue player) had six orange icons, but most of his card values were 0. He only had two 1’s. So his miners were only worth 12. In contrast, Han (red player) had more non-zero miners, and he currently had a strength of 77 from his miners.
The Thoughts

Nidavellir is a simple game. There are many heroes, and you calculate the dwarf strengths in different ways. These make the game sound more complicated than it actually is. At the core it is pretty straight-forward. I enjoy the heroes the most. The basic dwarfs don’t really do much other than creating the set of five colours collection aspect. It seems to me the general strategy is to go wide first, and then switch to going deep in the second half.

The game is easy to teach and highly interactive. It will work with families and non-gamers. Only one thing rubs me the wrong way – in order to be more immersive the rulebook uses some special terms. It reminds me of the Lord of the Rings books. Yes, I get that it’s nice to have a rich world with its own language and terminology, but in this case I find these thematic elements get in the way of new players learning the game.