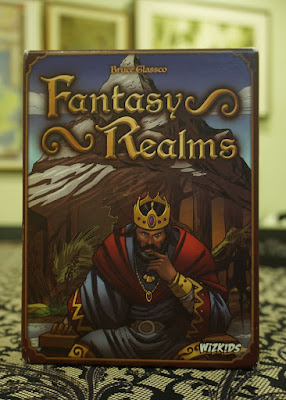 The Game
Fantasy Realms was a nominee for the 2021 Kennerspiel des Jahres. It is a short card game with a simple core mechanism. Despite the minimalistic ruleset, I consider this a medium weight game. Every card in the 53-card deck is unique. They have different base values and powers. All cards affect some other cards, so there are many card interactions to manage in your head. 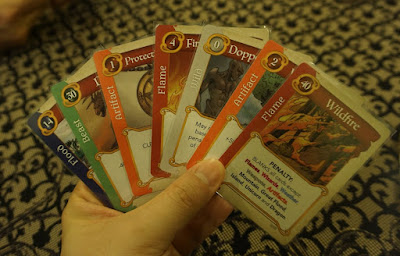 At the start of a game every player is dealt 7 cards. There are 11 suits in the deck, 10 of them have 5 cards, and the 11th has 3 cards. The number in the top left corner is the base value. Every card has a unique ability. The “ability” is sometimes a penalty. Ultimately these abilities affect the values of the cards themselves or the values of other cards. Some cards boost the values of other cards. Some cards decrease and even nullify the values of other cards. Some cards cancel the abilities of other cards. When you get your 7 cards, you can already work out what your total score is. However this score will change, hopefully for the better, as you play.
A turn is very simple – you take a card then discard a card, just like Lost Cities. You will always maintain a hand of 7 cards. You may take a card from the draw deck, or claim a face-up card from the centre of the table. When you discard a card, you always discard it face-up to the centre of the table. That means someone else might later take this card you discard. By modifying your hand of cards, you hope to increase its value and outscore everyone else when the game ends. The game ends when there are 12 face-up cards on the table. This is what players at www.boardgamegeek.com recommend. The official rules say play to 10 discards. 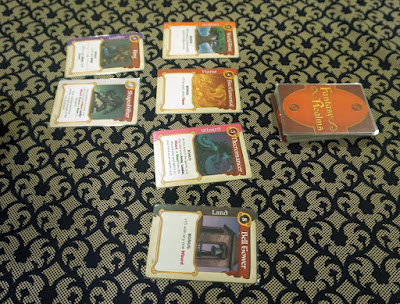 At this point 6 cards have been discarded. 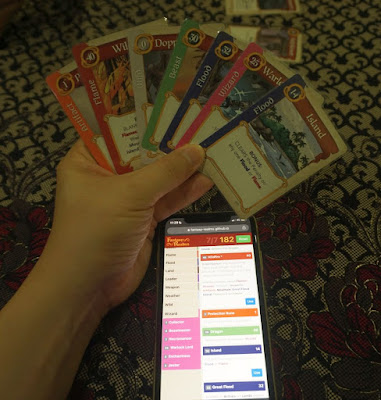 It is tedious calculating your current score. Every time you take a new card and discard an existing card, you more or less have to do the calculation all over again. Both the card you discard and the card you take may affect the rest of the cards in hand. Thankfully someone wrote a program to do the calculation for you. You just need to enter your hand cards and the program takes care of the calculation. Whenever your hand changes, just remove the card you discarded and add your new card. You still need to understand the card powers because you need to evaluate which cards to discard and which to take. You just leave the tedious scorekeeping to the program. 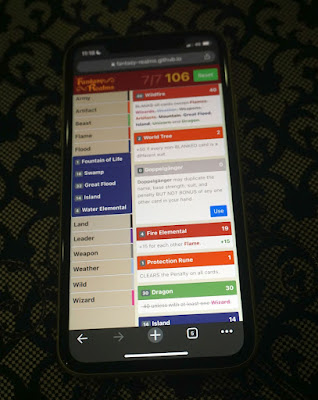 The program is on this webpage: https://fantasy-realms.github.io
The Play
You are basically trying to fine-tune your hand of cards within a tight time limit, aiming to increase your score as far as possible. Every time anyone draws a card from the deck, there will be another face-up card added to the table. You don’t really have much time. If you are lucky, your starting hand may already be pretty decent and you don’t really need to swap cards much. If this happens you should just draw cards from the draw deck and try to end the game before the rest catch up to you.
By watching what your opponents discard you can get some clues on which cards they may want and which they may not want. If you see them taking certain cards, it would be a big hint for what they are building towards. When you discard cards, you do want to avoid discarding something useful to your opponents. However it’s not always easy to guess what they want.
You don’t know your opponents’ current scores. I use 150pts as a rough guide. If I can hit 150pts I know that’s a respectable score. If I’m much lower than that I know I probably need to work harder. 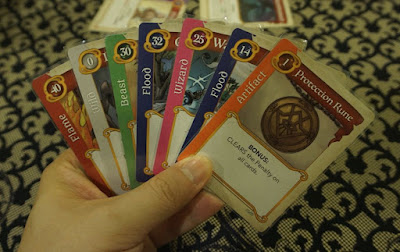 In this particular game I was dealt Protection Rune, which removed penalties from all other cards. I had many high valued cards which had penalties. The Protection Rune got rid of all these penalties and all my high-value cards were able to score their full values. This was very lucky for me. 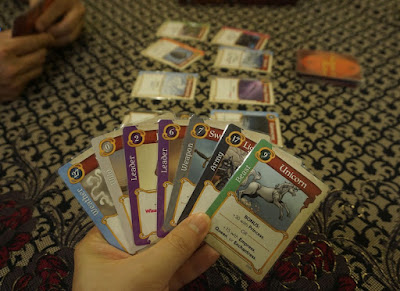 In the second game I managed to reach 150pts and I was quite confident. When the final scores were revealed, I was surprised to place last! Han scored 230pts! Allen also outscored me by about 10pts. A score which won in one game can end up being the lowest in another. There is a huge range in winning scores. In this second game Han had one particularly high scoring card which received a boost by having two other specific cards. He didn’t have them initially, but picked them up from what Allen and I discarded. It was Christmas time for him.
The Thoughts
Fantasy Realms is a game about making combos, and it does so in an incredibly succinct way. Every single card is unique. There is much interaction among cards. All of the interactions do keep to a consistent fantasy medieval theme. If the King is together with the Queen, they both become stronger. The magic wand is only truly powerful when wielded by a wizard. If you ask the dwarf army to fight alongside any other race, they grumble and fight less effectively. If you look past the fantasy setting, all the card abilities are just about increasing or decreasing card values. However the card names and artwork do help a lot in immersing yourself in the story. You don’t feel like you’re playing Excel.
There is some luck to the game, but I don’t think it’s a problem. The game is short. Sometimes you do get amazing combos right from the get go. That’s luck. But it is still entertaining trying to save an atrocious hand. I find the game concise and condensed. Quick yet satisfying. It’s a good filler for gamers, and a decent main course for casual players.