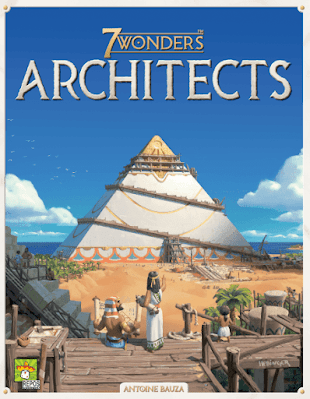 The Game
7 Wonders is hugely successful. It has spawned multiple expansions and spin-offs, and has now grown into a large game series. I recently learned that one of the latest spin-offs, 7 Wonders: Architect was made available on boardgamearena.com, so I asked Allen and Han to try it out with me. When I read the rules, I found many familiar elements. It was almost like a simpler version of 7 Wonders. It also has a bit of 7 Wonders: Duel.

At game setup, every player is assigned one wonder of the world to build. Each wonder is built in 5 stages. Once any player completes his wonder, the game ends. The players are meant to sit in a circle around a table. There is a stack of face-up cards between every pair of players, and a stack of face-down cards at the centre of the table. On boardgamearena.com this is presented as seen in the screenshot above.
On your turn you do just one thing – pick a card. You pick from one of the face-up stacks next to you, or from the face-down stack at the centre of the table. There are five different types of cards in the game, and they do different things. The grey and yellow cards are resources which you use for building your wonder. Whenever you have enough resources to build one stage of your wonder, you must do so. Whenever you build a stage, you get points and sometimes some bonus. Blue cards let you immediately score points. Green cards come with science icons, which you collect to exchange for techs. Some techs give you special abilities, some score points.

Some blue cards come with a cat icon. If you claim such a card, you take the cat statue as well. With control of the cat you get to peek at the top card of the central deck. You are no longer blind drawing from the deck. This is handy. 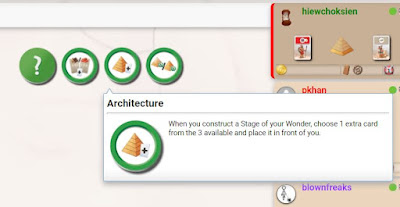 There are many techs. Each time one is claimed, the pool is replenished. If you don’t like any of the three turned face-up, you can blind draw from the face-down stack. 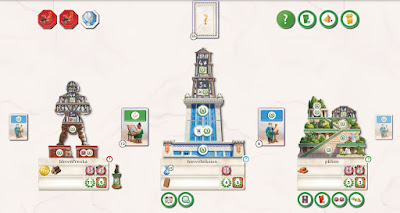 Red cards are military cards. You claim them to increase your military prowess. Some red cards come with battle horn icons. Horns cause the war status markers at the top left to flip from white to red side.  When all status markers are red, war breaks out. You compare your military strength with both your neighbours, and score a battle victory marker for each neighbour your are stronger than. These victory markers are worth 3VP each. If you are stronger than both neighbours, that’s 6VP, which is pretty attractive.
What I find interesting in the military aspect is after every war all military cards with horns are discarded. This means warmongering players who trigger fighting will lose strength after the fight they start. This is clever.
The Play
7 Wonders: Architects is a smooth and quick game. On your turn you just pick one card. Players are competing over cards. When there’s a card which both players want, it’s first come first served. It may seem that the player earlier in turn order has an advantage, but after this player claims a card that his neighbour also wants, the next card may be an even more attractive one.
Generally there are two types of tricky situations. The first one is when you like both the cards next to you and don’t know how to choose. When you pick one, the other may no longer be around by your next turn. If you know one of them is not attractive to your neighbour on that side, then maybe you can risk taking the other card. Hopefully the card you want will still be around next turn. The other tricky situation is when both the cards are lousy. Not that they are inherently bad cards. It’s just that some cards don’t fit your current needs. When both are bad, you probably want to blind draw from the central deck, trying your luck. However it is not good to be forever stuck with two cards you don’t want. If neither neighbour takes those cards, you may have to suck it up and take one, and hope that the next cards in the stack are useful to you.
When you draw from the central deck, sometimes you get pleasant surprises, which is nice. However you have to remember you are putting your fate in the hands of luck when you blind draw. It may not be a wise thing to do. The cat feels powerful. When you have complete information, you make better decisions. I suspect the cat feels more powerful than it actually is. I’m a little OCD so uncertainty when making decisions irks me. That is why the cat feels so important to me.
You have to pay attention to what cards your neighbours want and do not want. By doing so you can assess the risk of them taking what you want. Sometimes you have to take cards which are not important to you but are crucial to them. Yes, you have to be a jerk and hurt them even when it doesn’t bring you much benefit.
In the game there are four aspects you are weighing – collecting resources to build your wonder, directly earning points, obtaining techs for the special abilities (and victory points), and warfare. Direct scoring is a little boring, but points are points. They are not bad, just not interesting. Building one stage of your wonder takes patience and preparation, but the benefit whenever you complete a stage is rewarding. I feel it is better to take techs early, especially those which give you bonus abilities. By taking them early you get to use them more. If you get a victory point tech early, it is also useful because you have more time to adjust your play to fulfil the scoring criterion better. The warfare aspect is of higher uncertainty and it is exciting. If war breaks out often, the regular winner can get a huge lead. If there aren’t many wars, investing in your military seems wasteful. Whether there are many wars somewhat depends on whether players aggressively take military cards. It also depends on how the military cards are positioned in the decks. If many military cards are near the top of the decks, you can’t really avoid multiple wars.
This is an open information game. You can see what everyone is doing and you can guess what they intend to do. You can think deep if you want to. You generally only need to consider your two neighbours. Players sitting further away don’t affect you a lot. You won’t affect them much either. This is very much like the original 7 Wonders. It simplifies a 7-player game by allowing you to worry mostly about just your immediate neighbours. However 7 Wonders: Architects is a turn-by-turn game and not a simultaneous turn game like its predecessor. 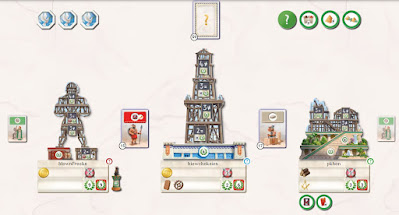 The wonders of the world have different characteristics and these affect how you play. On the left, Allen had built the left foot of the Colossus of Rhodes, which gave him a military strength of 2. This immediately gave him a huge advantage and encouraged him to pursue war. 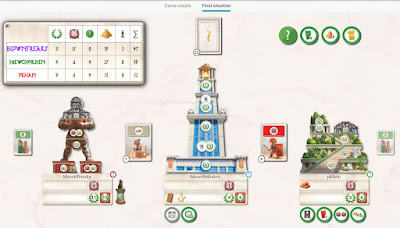 I was first to complete my wonder – the Lighthouse of Alexandria (centre), but completing your wonder does not guarantee winning the game. I only managed second place. Han’s Hanging Gardens on the right gave him techs, so he focused on collecting techs. 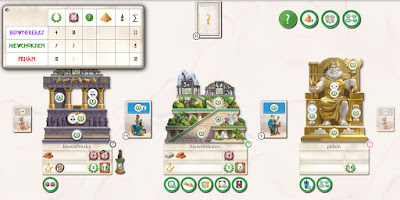 Since the game was quick, we immediately played another game. This time Han was first to complete his wonder – the Statue of Zeus.

The Thoughts
When I first heard of 7 Wonders: Architects I wondered whether it was a totally unrelated game with the theme pasted on to help sell it. After all the 7 Wonders series is well known. Now that I have played it, I can confirm it is quite different from the original, but it fits the setting splendidly. It is simpler, but it is not a streamlined version of the original. It is its own game, with a different core.
7 Wonders: Architects is a light game suitable for families and casual players. It is easy to learn but still has some strategy. It looks simple but it presents some interesting decisions. There is a fair bit of luck. You don’t know what cards will turn up. For a short game like this luck is not a big issue. In fact I think it works well here because it creates excitement and surprises.