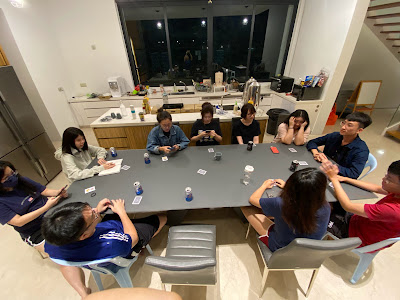 18 Jun 2022. I participated in MyStartr’s quarterly retreat, when the whole company stayed at a holiday house for 3D2N and had almost three full days of activities. In the evening during free-and-easy time I brought out my prototype Snow White and the Seven Dwarfs. It isn’t easy finding opportunities to playtest this with a group of 10+. I grabbed the chance to do it. The game was quite challenging with this many people. Some of the players took out notebooks and phones to take notes. This is a deduction game. The more players there are, the more information there will be to be digested and cross-referred. Everyone contributes a little bit of information, and everyone tries to link up all the clues. 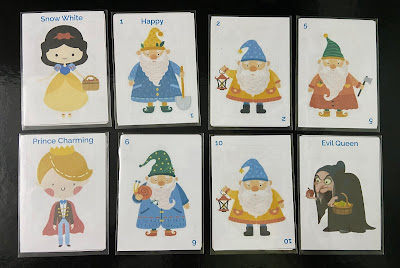 This is my current prototype. All the artwork is found on the internet. I didn’t do any of them. Snow White, Prince Charming, the dwarfs and the queen are all by different artists. I really like the dwarfs. If the game ever gets to the publishing stage, I should seriously look up the artist and commission his or her work.
Prior to this I had only playtested the vanilla game with just Snow White and the dwarfs. Now that I had more players, I could test the Prince Charming variant. There are two Prince Charming variants. The first one is simple. Prince Charming is just one more player on Snow White’s team. The whole reason I came up with Prince Charming was I felt Snow White was too lonely. This is a one-vs-many game, and for one player to go against a whole team of brains seems a little cruel. So in the basic Prince Charming variant, the prince is just a teammate to help Snow White. We didn’t play this. I skipped directly to the advanced Prince Charming variant.
In the advanced variant, Prince Charming starts undercover. He pretends to be one of the dwarfs and he’ll get to see another dwarf’s card. That means the Snow White team gets a little more information. If any dwarf chooses to look at Prince Charming’s card, the prince’s identity is exposed and he loses the ability to peek at a dwarf’s card. There’s about a 50% chance that Prince Charming will get to use his ability before being discovered.
One thing that surprised me was this variant created a new objective for the dwarfs. Finding the prince felt like an achievement, a mission being completed. It might not actually matter a lot to winning or losing, but the experience and emotions created were real. The existence of a Prince Charming also became a source of jokes and teasing. I was reminded that the game experience is not limited to just game mechanisms or winning and losing. The art, the setting, even the names used all contribute to the play experience.
I came up with the Evil Queen variant later on. I still have not yet playtested it. This variant turns the 2-faction game into a 3-faction game. It requires a bigger group too. I wonder whether this will make things a little too complicated. I am eager to try it out. 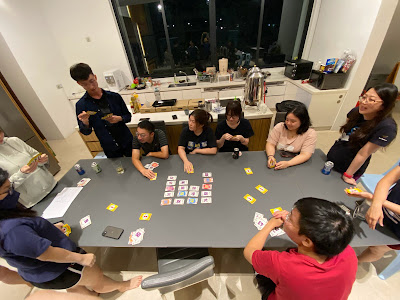 I taught everyone to play Category 5 / Take 6. This might be the first time I saw this played by 10 players, which is the maximum number of players. This was quite exciting, because almost every turn someone would get burnt. This is a classic card game from Wolfgang Kramer. It is more than 20 years old now and has been published in many different incarnations. I am focusing on designing card games, so I should learn from these successful card games. 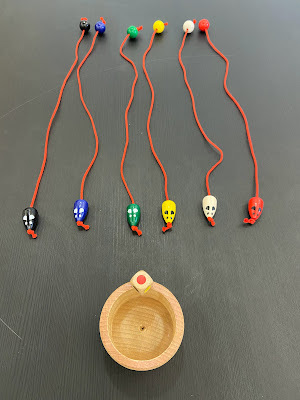 Catch Me is a children’s game from HABA I taught recently. This is a speed / dexterity game. Every player controls a mouse. The mice are placed at the centre of the table, with their tails extending outwards. The players hold on to the beads at the end of the tails. One player plays the cat and holds on to the wooden bowl. The cat player rolls the die, and depending on the colour rolled, he must try to catch the mouse of that colour using the bowl. The mouse tries to escape. The mouse player tries to pull his mouse away before it gets caught under the bowl. If the mouse gets caught, the mouse player becomes the cat player next round, and the cat player gets to become a mouse player. If the mouse escapes successfully, the cat player continues to be it next round. One important rule is if a mouse player makes any mistake, the penalty is becoming the cat player next round. E.g. red is rolled but the yellow mouse gets too excited and runs away. The yellow mouse player will become the cat next round.
My work on Dancing Queen continues. My artist has come up with three pieces of concept art. I went to different groups of people to ask for input. I have my own preference, but what is more important is the preference of my target audience. I gather data to help me decide.

This is the minimalistic style

This is the modern animation style
The people I surveyed can be divided into three main categories. The first category is my friends and family, i.e. mostly Malaysians. They are a mix of boardgamers and normal people (ahem). The second category is a community of Malaysian game designers, so they are all boardgamers. The third category is a community of international game designers. The three groups have slightly different preferences. Overall the Japanese manga style won hands down. So this is the direction I’m heading in. One interesting thing I find is the international group has a strong preference for the minimalistic style. I had thought the modern animation style would win more votes. It did have many supporters, but at the final tally, it did about the same as the minimalistic style.
I am very excited to see my game take shape bit by bit.  Hopefully all go according to plan and I can get the game released in Nov 2022. 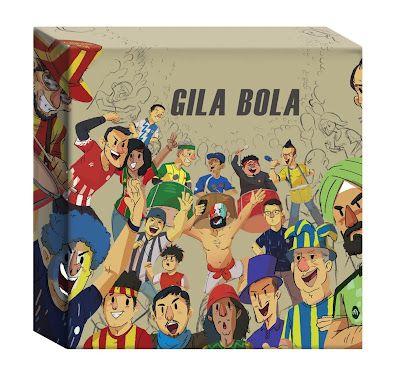 Gila Bola is what Haireey is designing and developing now. It is a game about the Malaysian football league, and this is his work-in-progress box art. He asked whether anyone wanted to be a cameo, and I jumped at the opportunity. For my jersey, naturally I picked the Sabah team, because I’m Sabahan. Getting myself onto the cover of a boardgame is more exciting than appearing in a newspaper! 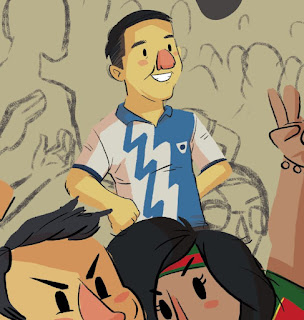 This is me – cartoon version 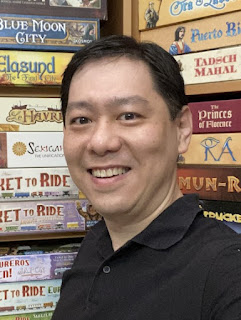 This is the live-action version

Tagged as: boardgame design, Game Design, Made in Malaysia