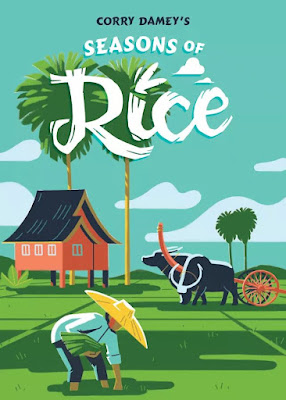 The Game
Seasons of Rice from Button Shy Games is a game with only 18 cards. It is a 2-player-only game. You build your own territory using cards, and score points based on the features in your territory. 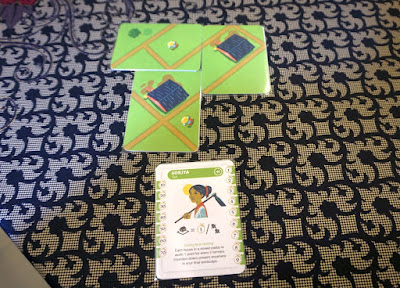 One side of a card is a character, and the other side is land. During setup, you draw two cards and pick one as your character. The other card becomes your starting land. Your character gives you a unique ability, usually related to scoring. Basic scoring (which both players enjoy) is based on fields you complete, i.e. areas enclosed by paths. The bigger the field, the more points you score. If a field contains a house, it is considered one level larger. Farmers and water buffalos in completed fields also score points. Buffalos score a flat 2pt each, but if you have buffalos outside of completed fields, you lose points. Farmers don’t score many points if you only have a few, but if you have more, they are worth more than buffalos.
Land cards can be placed vertically or horizontally. The key is not to leave any holes when you form your territory. Enclosed fields with holes in them are considered incomplete. 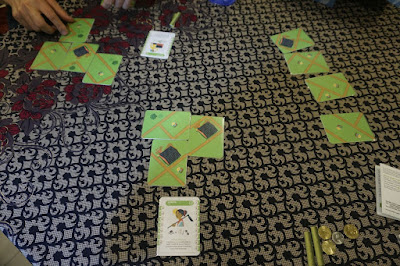 The game is played over two halves, called seasons. When the first season starts, all 14 cards in the deck are dealt to both players. You pick one card to add to your territory, and set one aside for the second season. You then pass your hand of cards to your opponent. Repeat this two more times, then play the last card in your hand, and the first season ends. You will have 5 cards in your territory. There will be 6 cards set aside for the second season. The trailing player starts the second season, picking a card to play. You take turns playing a card until all are used. That ends the game. 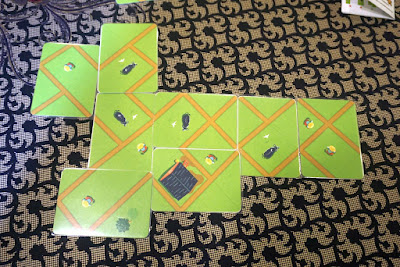 There are 5 completed fields in this photo. Can you count them? The small single square fields are completed fields too, just that they don’t score much. Naturally you want your fields to be as big as possible, but there’s a risk in being greedy. You might not complete the field by game end. If so, you get nothing for it.
The Play
This little game has plenty of player interaction. You are constantly struggling between what you want and what your opponent wants. You must be keenly aware of your opponent’s character power, so that you avoid helping him as far as possible. You are often torn between picking a card you want and picking one your opponent wants, for the sake of denying him. Sometimes it is not easy achieving the scoring criteria of your character. Completing a field can be challenging, especially when you are going big. This is very much a spatial game, so it feels more like a boardgame than a card game. 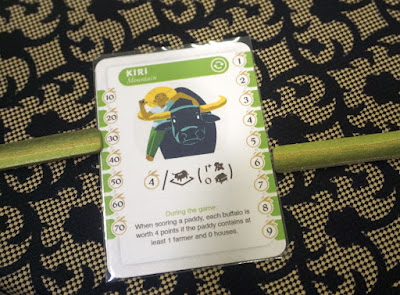 You need to supply your own coins to keep score. Allen and I used components from another game.

Seasons of Rice is swift and simple, but it gives your brain a good workout. There is a fair bit of luck, but it makes you feel you have much control, because there are many factors you can consider. You do have much information on which you base your decisions. This is a good thing. When you win, you feel clever and that you deserve it. When you lose, it’s just luck. Seasons of Rice is a pleasant and relaxing little gem.