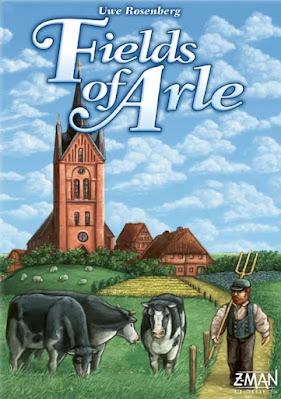 The Game
In Fields of Arle, Uwe Rosenberg tells the story of his home region. This is a heavy Eurogame with worker placement as its core engine. It is a game about farming and small industry. It is for two players only, but with the expansion it supports three. 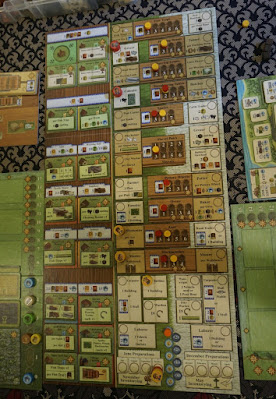 This is the main game board. On the left are buildings you get to buy. They have different powers and point values. On the right you have many different action spaces for worker placement. Each player has only four workers, and this number doesn’t change. You only get to perform four actions every round. One thing unique about the worker placement mechanism here is the action spaces come in two types – summer and winter. The game rounds alternative between summer and winter. In summer you can only perform summer actions, and in winter winter actions. 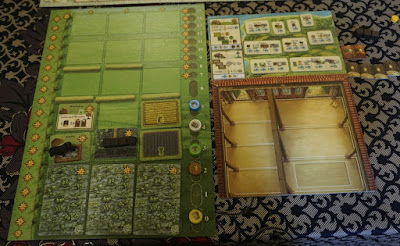 These are the player boards during setup. On the left you have your lands. You already start with some buildings and fields. You have swamps, which can be cleared for peat, one of the resources in the game. The top half of the land board is submerged under water and unusable. You need to build dikes to keep the water out and unlock more land parcels. The horizontal bars are the dikes. One of the actions you get to perform is to move them upwards. This is how you unlock land parcels.
The board at the top right holds trade destinations. The board at the bottom right is your garage where you keep your horse carriages and other equipment. 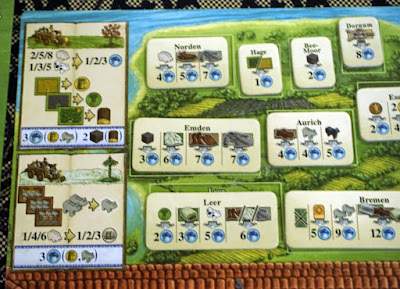 This trade destination board is one of the player boards. Each tile here represents a city you can trade with. You can trade with a city just once per game. You assign one of your horse carriages to travel to the city, and you sell specific goods in exchange for food. One element which is similar to Agricola is the need to pay food at the end of every round. In case you don’t have enough food, there is a penalty. However in Fields of Arle you’d have to do pretty badly to be unable to afford food. Food is one of the currencies in the game and is used for many purposes.
The left side of this board is a reference table showing the administrative steps to be taken at the end of a summer round as well as a winter round. For example harvesting crops in summer, and animals breeding in winter. 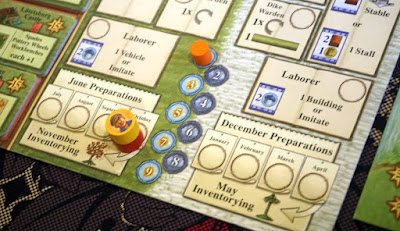 The orange marker is the round marker. The game is played over 9 rounds, alternating between summer and winter rounds. 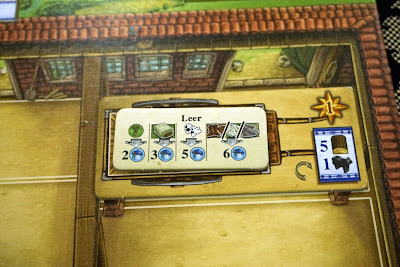 The horse carriages are an important element of the game. There are many different types of carriages in different sizes you can buy. Once you have a carriage, you can use it every round. Loading stuff onto a carriage is a free action. There are two types of tiles you can load onto your carriages. The first type is destination tiles (photo above). This represents traveling to the city and doing trade there. When you supply the specific goods needed by the city, you get food in exchange. Each destination tile can only be used once. Ideally you want to supply as many goods as the city wants, fully utilising the destination tile.
The second type of tile you can load is goods. When you load specific goods onto your carriage, you flip them over to become the upgraded version. Wood becomes timber, linen becomes summer wear, and so on. The upgraded versions are worth more points. 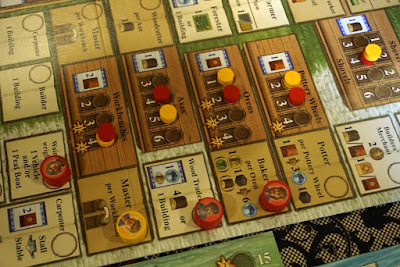 There are many tracks at the centre of the action board. These represent your skill levels in different areas, and they affect specific action spaces. If you intend to perform a certain action frequently, it is best to improve your skill related to that action, so that your actions become more effective. The star icons mean point values. Some skills are worth points if you train yourself hard enough. 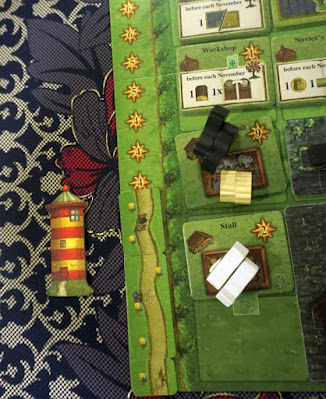 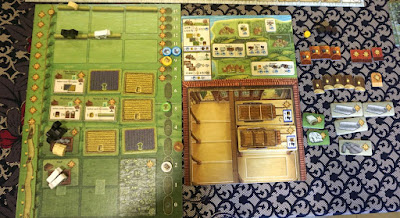 The track along the right edge of your land board is for keeping track of various resources. At the end of the game, if the resource markers are high enough on the track, you score points. Anywhere you see stars, there are victory points.
This is a development game and a resource conversion game. You upgrade your farm and expand your industries. Many things get you points. The buildings are an important source of points, and the large buildings are part of your long-term strategy. You need to plan ahead for them and save resources to be able to afford them. You need to beat your opponent to them too, since there is only one copy of each building.
The Play
The first play was a little daunting, since there were many different actions to digest. The game has many moving parts. Essentially this is a resource conversion game. You produce different types of resources, you then spend them to get other resources or you upgrade them to become more valuable resources. The game does tell a story and different aspects of farming life in Arle. They are represented by resource production and conversion, ultimately into victory points. In terms of game mechanisms, there are some interesting ideas, but nothing particularly innovative. If you like Uwe Rosenberg’s style you will feel right at home. The game feels familiar and comforting.
Variability comes from the buildings. Some buildings are picked randomly during setup. I have only played one game, so I can’t say for sure that different building combinations will drastically change the game. I believe it will affect how you play.
You need to focus on some areas, for example maybe you want to be a good weaver, or a butcher. If you want to be good at something, i.e. to be efficient and productive, you have to invest time to learn and hone your skills. You also need to make sure you have the right equipment and production facilities. All this means you have to plan your actions to be coherent. Focus on a few things, and be good at them. The strategic space is wide and you can explore different areas of focus from game to game.
Four of the buildings are cheap, and they provide benefits every round. They are affordable in the early game. In our game I bought three, and Allen one. I soon realised these early game buildings were intended to be fought over by the players, and each player was expected to claim two. These early game buildings would define the strengths of the players and pull them in slightly different directions. Since I had two more buildings than Allen, this gave me a large advantage, and it was cumulative. He did manage to beat me to buying a peat boat and a plough in the early game. However the early buildings were more powerful.
A good general principle to hold on to is to maximise every action you take. You will only ever have four actions every round. There is no family growth and no increase in actions. To do more, you have to make your action more effective. Some actions let you do two things. Ideally you want to time your action to allow you to do both. You also want to increase your skills in specific areas, so that when you take those related actions, you receive more resources or get more work done. 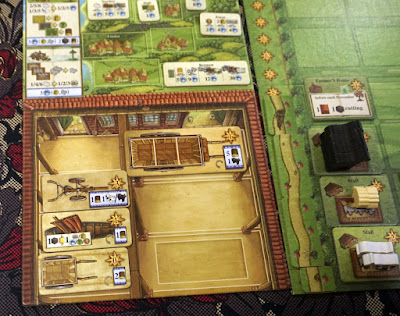 This was Allen’s garage. He had more equipment than I did. 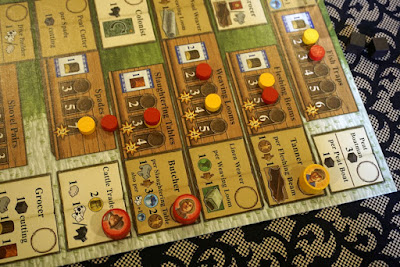 One interesting twist is every round one player may perform an out-of-season action. E.g. you may perform a summer action in winter. There is a cost to it though. You have to surrender the start player token to your opponent. 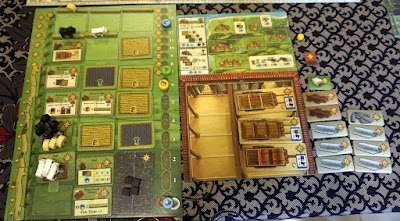 I only had large carriages in my garage. I could not fit in any more by now. I had many fields because one of my early-game buildings gave me a free field every round. 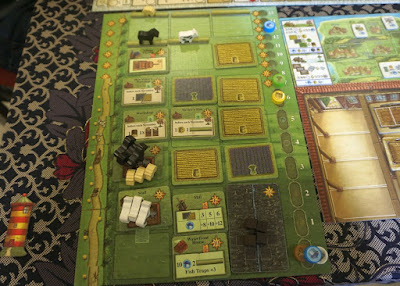 Animals produce milk. Sheep produce wool too. The dikes have space for one animal each. 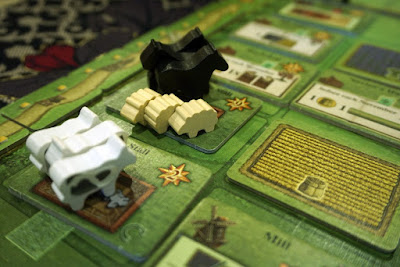 At game end, only the animals types in which you have the fewest of and second fewest of score points. That means you want to increase your animal count evenly for every animal type. There is no point having many animals in just one type. It wouldn’t score points. 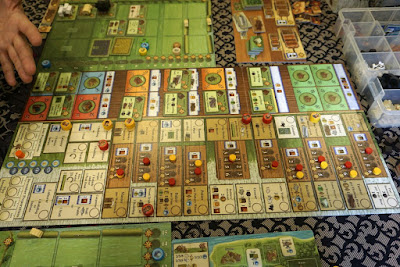 Despite being a 2-player game, Fields of Arle takes up much space.
The Thoughts
Fields of Arle has the Uwe Rosenberg signature. It is a heavy Eurogame. It has worker placement. It is about farming. Most of the game mechanisms are familiar to those who have played his games. There are some interesting quirks, which are nice. Just don’t expect anything earth-shattering. I imagine this is a very personal game to the designer. It does feel like he is taking you on a tour of his home region where he grew up.

LOAD TESTING for BGC Space
Okie dokie we are now setup for the Play session later with over 40 pax. I think these bunch of games should be enough. You think so?
𝗚𝗘𝗡𝗖𝗢𝗡 𝗣𝗥𝗘𝗢𝗥𝗗𝗘𝗥𝗦. Here's the full list of our available GenCon preorders that we've just buzzed earlier today.
One more for the road. This and that....
Sometimes the smaller boxes pack as much punch! Check out GET ON BOARD and LAND vs SEA if you have not.