I went to the May 2022 Alphameet organised by TTGDMY (Table Top Game Designers Malaysia). Alphameets are for game designers to come together to playtest one another’s prototypes. They are more about playtesting, giving feedback and exchanging ideas, and less about purely playing games. I brought quite a few prototypes and managed to get two of them played. My games tend to be simple and short, and the convention at Alphameets is to play shorter games first. So I got to play my games earlier. I have only participanted in an Alphameet just one other time. Back then I could only join late in the event, and I missed most of the activities. This time I managed to join at the start. It was a small event this time. We only had two tables.

The first game of mine I managed to get playtested was Snow White and the Seven Dwarfs. This was the first time I got it playtested. I didn’t even have a proper prototype then. I used cards from a standard card deck. This game needs at least 5 players to be fun (I think), so it isn’t something I can playtest easily at home with my daughter. Those who playtested it with me at the Alphameet seemed to enjoy it. We played two games back-to-back. I later decided to make a proper prototype, using drawings found on the internet. One of the game designers Jon who playtested Snow White later played it with his friends. They found it interesting and played for one an a half hours straight. That was certainly encouraging. I was moved that this little game borne of a simple idea brought joy to people. 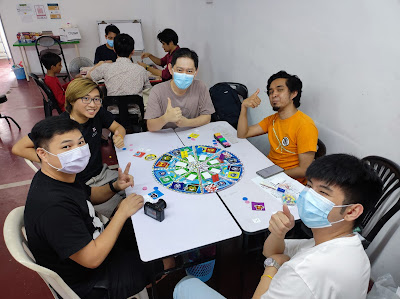 This was Haireey’s football (soccer) game. It was a light game based on the Malaysian football league. Haireey is not new to game design. He designed Drama Pukul 7, a card game poking fun at Malaysian soap operas. He said many people found Drama Pukul 7 too complicated, so he wanted to design something simpler with a wider appeal. This was the first time he playtested his football game, and there were aspects he expected to adjust, but I could see this working with casual players. football is something many people can relate to in Malaysia. The game will be attractive. 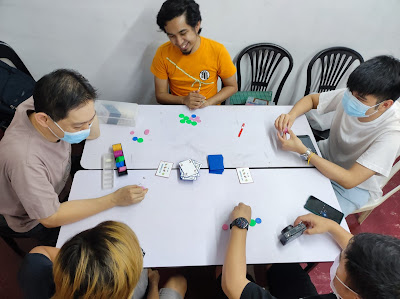 This was my gambling game Saikoyu. I brought my own cheap plastic poker chips. There is a fair bit of luck. You have no control over what card you get. You have some control over the ante of the round. You need to watch your opponents’ expressions and behaviours and try to guess their thought processes. It may give you important information. The twist in this game is you don’t know your own card. Like Hanabi, you can see everyone else’s card but not your own. You have to place bets based on incomplete information. I am not entirely happy with this game yet and I need to tweak it further. 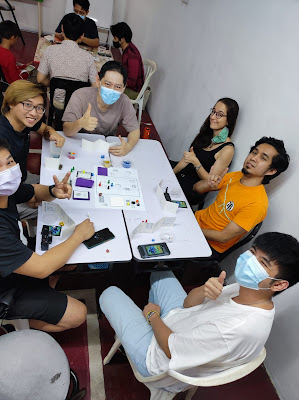 This was Jon’s traitor game. The players were managers reporting to the Devil himself. We were responsible for taking care of and guarding Hell. Hell was constantly being attacked. If a certain number of departments were destroyed we would lose. Every three rounds we had to pool together to pay a tax. If we failed a second time we would lose. With 5 players, there were two traitors among us. They would be trying to sabotage us. In addition to the traitor mechanism, this game also featured worker placement. Each of us had two pawns to place every round.
Jon probably intended to get us to play just the first three rounds to get a feel, and then ask us for feedback. However the more we played, the more we wanted to play on, to see how things would turn out, and to find out who the traitors were. Eventually we ended up playing the game in full.
I was a loyal manager, so I kept wondering who the traitors were. It was tough being a manager. We had to worry about defenses as well as financials. In addition to that, we also had our personal goals. In order to win we not only needed Hell to survive, we must also complete our personal goals. This was just like Dead of Winter.
By the final round we had exiled and exposed one traitor, and I knew who the other one was too. Hell went through much hardship, but it was going to survive. At that point we had enough money to pay the final tax too. We had failed once, and were we to fail again we would lose. Thankfully I was the commander in the final round, so I could exclude Haireey (the traitor) from the tax payment process, so that he couldn’t mess us up. When the money bag was emptied, we found that we were short! That player whom I had trusted turned out to be the traitor. Haireey was a legitimate manager. What the hell?! In the 9th round, we had come to a point that we would win on lose depending on whether that player whom I trusted was a traitor. We were in a bad place and we had to gamble. If he were a traitor, he would have botched the tax payment then and caused all of us managers to lose. However he didn’t, so I had concluded that he must be a loyal manager. Later we found out that at the 9th round, he had misunderstood a part of the rule, and because of that he contributed enough money to ensure the tax payment was successful. That screwed up my deduction. I had to apologise to Haireey for not believing in him. Sorry bro! This playtest experience was great. I hadn’t expected an early prototype to be this enjoyable.