The most important milestone for me in 2021 is Dancing Queen winning the Best Overall Game at the BoardGameGeek.com 9-card Nanogame Design Contest. This was a great encouragement for me to continue working on game design. I became a boardgame hobbyist in 2003. Throughout the years I have mostly been a consumer and not a creator. I did dabble a little in game design a few times, but I never took it seriously until recent years. The first game I spent a lot of time and energy on was F My Life, a game about questionable life decisions which has some dark humour. I made a prototype and played it quite a few times with different people. However I was not able to get it to a stage I was satisfied with. Eventually I set it aside. I still like the premise. Hopefully I can think of some other way to make it work. Then I’ll return to it.

The whole idea behind Dancing Queen was inspired by the contest. The rules required that contestants use at most 9 cards to design a game. I found this an interesting challenge because I’ve always admired Love Letter. It only has 18 cards but it is a clever and compact design. I wanted to do something like that – create a fun game with minimal components. Dancing Queen went through many cycles of designing, playtesting and fine-tuning. It was a rewarding experience with many happy discoveries.

In November I participated in the Game On Lah event. This was the first time I showcased my game design at a public event. It was a valuable experience.

I have quite a few work-in-progress game designs. Some of them are portable 2-player games just like Dancing Queen. I toyed with the idea of making a 10-card game and an 11-card game as follow ups to Dancing Queen. These games are easier to work on because younger daughter Chen Rui is usually willing to playtest with me. She was my #1 playtester for Dancing Queen and even developed a strategy I hadn’t seen myself. However I later shifted to work on games for bigger groups. 2-player games may be too niche. If I am aiming at the global market, the 2P target audience is big enough. However if I’m going to start with Malaysia, then a safer and easier bet is probably casual games for 4 to 6 players which can be played at boardgame cafes and at non-gaming-specific gatherings. Now I have some prototypes which are for this player range. Some game ideas started with using just a standard deck of cards. This makes creating prototypes easier, because I don’t need to create a prototype.

Jeff, Kareem and I are working on establishing a games studio to design, develop, publish and market Malaysian games. We are all busy with our other primary jobs so this is moving slowly, but we hope to make steady progress.

Work-wise, this year I joined a partnership with three other friends to work on an education business targeting young children aged 4 to 7 – Play with Purpose. We are now one of the distributors of HABA, the 80-year-old German company specialising in children’s games, toys and other products. We will be bringing the HABA Learning Program to children in Malaysia. It’s a blessing to work on something you are passionate about. As the saying goes – when you find a job you love, you never have to work another day in your life. You are doing what you enjoy, so it doesn’t feel like “work” anymore. In 2015 when I joined a mobile game company, it was a most exciting time in my work life. 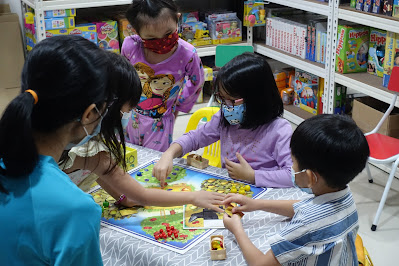 The pandemic situation in Malaysia was much worse in 2021 compared to 2020. I attended even fewer boardgame meet-ups than last year. This year I have slightly more than 30 new-to-me games. One which stands out is MicroMacro: Crime City. It is certainly something very different from the typical boardgame. It is essentially a solo detective game. It’s the kind of game you can only solve once, just like reading a detective story.

MicroMacro: Crime City
This year I played quite a few new-to-me games on BoardGameArena.com. They were all played with Han and Allen. We play with a Zoom conference call on at the same time, so that we can chat. The experience feels much closer to playing face-to-face. The three of us used to game regularly some years ago. We all like to play fast, often starting our turns when the previous player is still wrapping up his moves. Our tastes in games overlap well enough. We clicked well as a small gaming group. Now Han lives in Johor Bahru, about 4 hours drive away, so we don’t get to meet up often. Due to the pandemic we actually met up and played, albeit virtually, more than in recent years. Among the games played online this year, I liked Carnegie the most. I can’t really justify why I like it better than other similar games. It’s a strategic Eurogame. It is a development game in which you improve your abilities and get more and more powerful. You get a sense of achievement as you see your efforts pay off. You get to set long-term goals, and when you are able to achieve them, you get much satisfaction. Yet many heavy Eurogames have these too.

I bought a used copy of Baseball Highlights 2045. I rarely play sports-themed games and generally don’t find them interesting. I am not familiar with baseball. However I quite enjoyed this game. It’s a tactical 2-player game with some deck-building. You gradually trade mediocre players for better and better ones, augmenting your team. You will leverage the abilities of your players. At the same time you watch what kind of players your opponent is buying, so that you know how to play against them, maybe even recruit new players who are good at defending against or even neutralising your opponent’s strengths.

Baseball Highlights 2045
I bought a copy of Imperial Struggle, designed by the makers of Twilight Struggle. It looks more intimidating than Twilight Struggle, but once you get into it, it is not that scary. I enjoyed this sweep of history game.

Imperial Struggle
Traders of Osaka has the Japanese game signature – small box, few components, simple rules, but everything is intricately crafted and comes together as a clever and tightly-woven game. Often when I read the rules of these Japanese games, I cannot fathom what makes them fun. Only upon experiencing them first hand I am able to appreciate their brilliance.

In 2021 I have bought only six games. If declaring oneself a boardgamer requires a license, mine would have been revoked. I bought MicroMacro: Crime City, Imperial Struggle, A Kindly World and Pandemic Legacy: Season 0 because they promised a certain experience I was keen about. I have owned Pandemic Legacy: Season 0 for almost a year now, and still have not started playing the campaign, because of the actual pandemic happening around us. Hopefully next year I will at least get the campaign kicked off with the same team who accompanied me through seasons 1 and 2.

I bought Priests of Ra because I was curious to see how it worked. Ra is a game full of happy memories for me. Priests of Ra is not new. In fact it is probably out of print in most places. I bought it mostly because of nostalgia for its predecessor. Strictly speaking it was my wife Michelle who bought JOME. For now I count all game purchases in the household as mine. Michelle bought JOME to support a local game designer.

My most played games in 2021 were all played on digital platforms – Race for the Galaxy (played against AI’s), Star Realms and Ascension. I played more than 400 games of Race for the Galaxy, and more than 100 games of both Star Realms and Ascension. Other games played more than 5 times include MicroMacro: Crime City (I solved all the crimes in the base game), Betrayal Legacy (my family and I continued the campaign late last year and completed it early this year), and Sky Towers. I have certainly played many games of Dancing Queen too, just that I didn’t record them when I was still in the designing and playtesting stage. Because of that I didn’t develop the habit of recording plays for it even after the game was done (as in submitted for the contest). Maybe I feel the game is never quite done because it is my own design. I can always decide to change it and improve it further.

Race for the Galaxy

I was interviewed by Sinchew Daily again. The last time was 2017 and it was a different reporter then. This time round a few others in local boardgame circles were also interviewed. The reporter wrote a series of articles and they took up quite a lot of space. This was good exposure for boardgames.

Here are my hopes for next year. I hope the pandemic situation gets better, and I can have more face-to-face gaming sessions. I hope to make more progress in game design and game publishing. I hope to introduce the boardgame education programme (HABA Learning Program) to more children, parents and educators. Here’s wishing a happy new year to everyone!

Been a long wait (for their 2nd printing) but they are finally here! CARNEGIE COLLECTOR'S EDITION (also known as #27 Masterprint Edition). We'll be in touch with preorder customers asap (and apology again for the long wait).
Hello JULY!
Rescuing Robin Hood https://boardgamecafe.biz/products/4088-rescuing-robin-hood/
Diabolik: Heists and Investigations from Ares Games https://boardgamecafe.biz/products/4083-diabolik-heists-and-investigations/
A picture is worth a thousand words