Bringing my daughter to Sekigahara 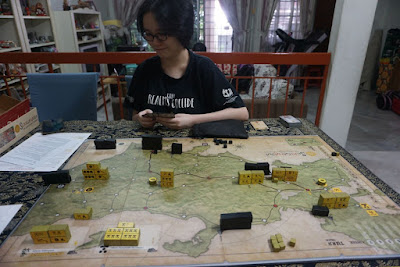 25 Dec 2021, Christmas Day. During younger daughter Chen Rui’s school holidays I taught her a number of games. Since she is usually open to try anything, I asked whether she wanted to try Sekigahara. She watches Japanese anime and I thought she would know Tokugawa Ieyasu and maybe Ishida Mitsunari, but she said no. She had not played wargames before. Going through the rules was a little overwhelming for her. I said don’t try to memorise all the rules and just get a general idea. Although I had summarised the rules into a one-page A4 sheet, there was still a fair bit to go through, more than she was used to.
I let her play Tokugawa (black), because I think it’s generally more fun. You usually draw more combat cards and also more reinforcements. I played Ishida (gold). 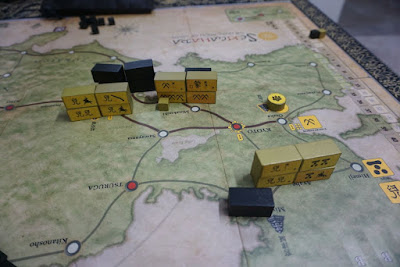 At the start of the game Chen Rui didn’t have much idea what to do. Although she won the bid to decide who to be start player, she let me go first. This was the western side of the map (I sat at the north edge), and the Ishida faction was stronger here. I took the battle to the Tokugawa faction armies. 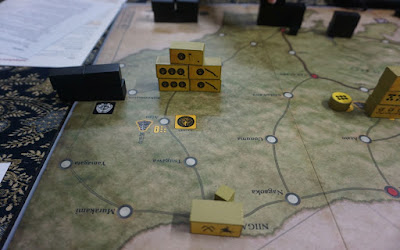 In the east I took on the aggressor role too, since I had the right cards at the time. One unit split away and went north to capture a resource location. That allowed me to place a gold cube. 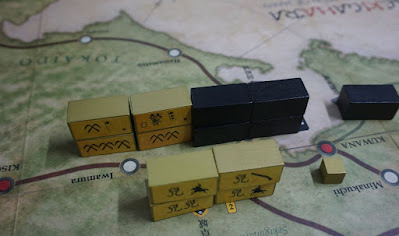 In the west, although I was moderately successful, I did not manage to truly dominate the area. The Tokugawa faction had one special unit led by Ii Naomasa. This was the strongest unit in the game with strength 4. It could be deployed with any card unlike other units which could only be deployed using matching cards. Also it would never turn traitor. I remember in previous games Ii usually died early, because he was located in a hot spot. In our game Ii lasted a long time, giving the Tokugawa faction great support. 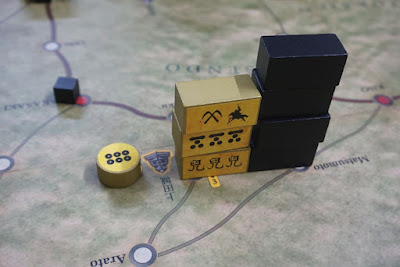 The siege of Ueda Castle would always happen. It was just a matter of how long it could hold against the Tokugawa faction (black). Chen Rui sent Tokugawa Ieyasu himself to besiege the castle, and the castle fell quickly. Sanada in our game was not as successful as his historical counterpart. 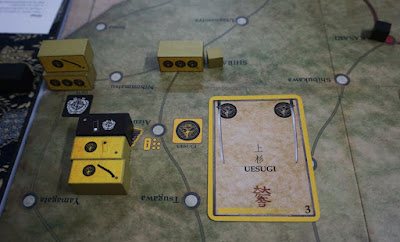 My Uesugi army (gold) in the east attacked Chen Rui’s Date army (black). I wanted to capture her recruitment location so that I could take control of this area. 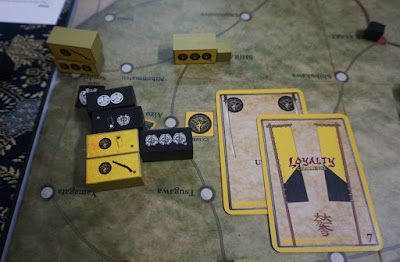 In this battle I played the loyalty challenge card, and it was successful. One of Chen Rui’s units turned traitor and came over to my side. However she too later played a loyalty challenge card, and was successful too. Although I won this battle, I did not gain much edge over her. One of her losses was taken by my unit which turned traitor. We lost about the same number of units. In the end I was only able to temporarily force her to retreat. I could not destroy her army. 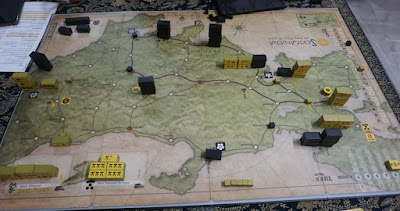 Chen Rui’s Maeda army along the northern coast (lower part of this photo) had now marched to the front line to help protect her castle in the west (right). My army was marching towards that castle. Along the southern coast, Chen Rui sent a Tokugawa army from Edo to the west to help Ii Naomasa. They took the Tokaido highway, which allowed them to move faster. 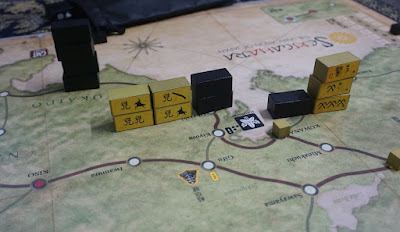 One of Chen Rui’s castles (the rightmost one) was only garrisoned by one unit now. Unfortunately my three units besieging it could not muster the 7 impact needed to kill that last unit. I had to send in reinforcements before I could storm the castle successfully. 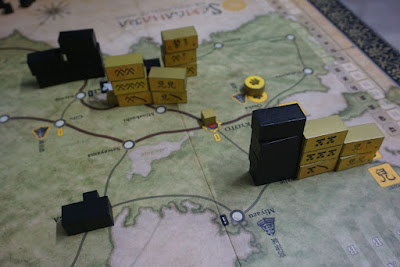 Battle is met in the north west (bottom right). 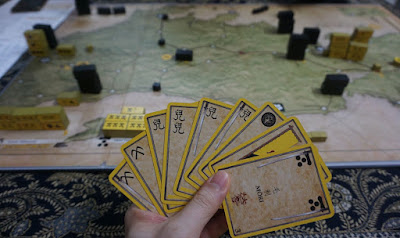 There is no randomness in the battle system in Sekigahara. Well, unless you argue that the card draw is a form of randomness. The strengths of the units on the board don’t change. It’s just that your opponent may not know them yet. Also he doesn’t know whether you are holding the right cards. Conducting a battle is not so much about executing the steps. It is much more about deciding whether to fight. This is where the psychology and the manoeuvring come into play.

In the east (left) my small army was about to be squashed. Tokugawa Ieyasu himself had come to make sure it would not live. In the west I had consolidated my power and could now plan my expansion. Most of the time throughout this game I fell behind Chen Rui in both the number of castles and the number of resource locations, so she usually drew more cards and reinforcements. I also suffered more battle losses than she did. I was constantly under pressure and lagging behind. 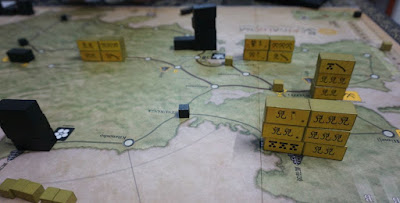 I was now stronger along the northern coast, and eager to go on the offensive. The units in the central area had thinned due to the multiple clashes. One of my armies took the opportunity to capture a resource location. 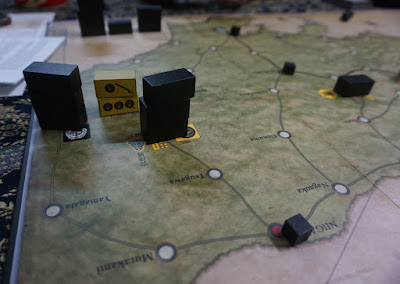 Tokugawa Ieyasu himself captured my only castle in the east. What was left of my army was just waiting for the inevitable. Eventually Chen Rui completely controlled the east. 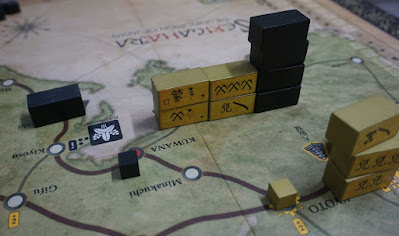 Chen Rui’s (black) army attacked my army (gold) which included Ishida Mitsunari. This was a dangerous situation for me. If Ishida got killed, I would immediately lose. When the dust settled, I lost the battle and three units. Ishida was the only unit that survived. Chen Rui’s Tokugawa army had zero casualties! Ishida had to run for his life through village roads and scurried back to Osaka. I even had to pay an extra card to let him run faster, else Chen Rui would have been able to catch him. It was quite a disgrace. 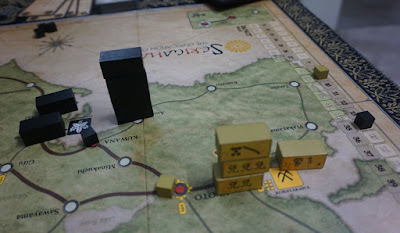 Ishida barely managed to run back to Osaka. 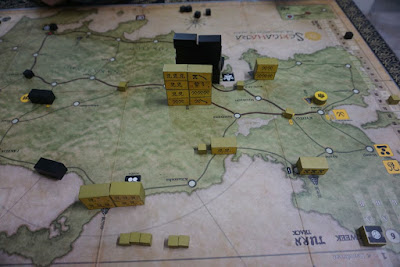 Chen Rui continued to send units forward using the Tokaido, and by now had assembled a large army of 11 units. My largest army in the area had 8 units.
I managed to capture the Tokugawa faction castle along the northern coast belonging to the Maeda clan. This was an important 2 victory points for me. For most of the game I was behind in points. Only by the final round I managed to overtake Chen Rui.
At this point it seemed the most likely battle would be the clash between our largest armies, and this was actually pretty near the Sekigahara battlefield. Ironically Tokugawa Ieyasu himself was absent. He was still far away in the north. He was within striking distance of my medium sized army which had captured the Maeda clan castle. Chen Rui still controlled some resource locations along the northern coast. She was worried I would continue to advance and capture those locations. She had one unit guarding a resource location which I could overrun, and she felt bad leaving it to die. She sent the small army led by Tokugawa Ieyasu to join forces with the lone unit, and at the same time help guard her resource location. I had told her previously this was risky because Tokugawa would come within striking range. She undid her move then, but later on she forgot about it and pushed Tokugawa forward.
The upcoming Sekigahara battle looked rather iffy to me. Chen Rui had more units. I thought my odds would be better if I tried to catch Tokugawa. My whole army in the north were Ukita units. About half my units at Sekigahara were also Ukita units. I did have Ukita cards in hand. However I knew if I spent my Ukita cards attacking Tokugawa in the north, after the battle concluded, I might not draw enough Ukita cards again to be used for the Sekigahara battle. Attacking Tokugawa was a gamble. If I didn’t manage to kill him, the Sekigahara battle would likely mean doom. 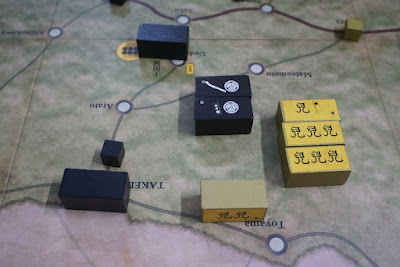 Thankfully I gambled right. Although Chen Rui had three units, she was only able to deploy two. I had just enough impact to win the battle and kill two units. Since she had deployed Tokugawa himself, she must pick him as one of the casualties. That meant game over for her.
Chen Rui could have decided not to deploy any units. If none of her units were deployed and I made only two kills, she could sacrifice the two other units and let Tokugawa escape. However I did have enough cards to inflict three kills. It would not have worked for her if she depended on me being unable to inflict enough damage. If I remember correctly, once I played my last unit, I would run out of Ukita cards. If Chen Rui played a loyalty challenge card then, I would have no Ukita card to show her. That would mean one of my units would betray me. I would not be able to inflict enough damage to get Tokugawa killed, and the traitor which went to her side would become one of her casualties. The battle would have ended with fewer losses for her. Thankfully I did not have to deploy my last unit and I did not use my last Ukita card. Else the outcome of this battle would have been very different. Tokugawa would have lived.
Chen Rui had a few loyalty challenge cards in hand which she had held on to for some time. The card value was high, and that made her reluctant to spend them. This was a little misleading. It can be bad having too many loyalty challenge cards, because it means you are less able to deploy your own units to fight. They reduce your fighting ability. Loyalty challenge cards can certainly be very powerful, but only when you play them at the right times. She probably should have used some of them and only kept one, or at most two. I could have deployed my last unit, but I did not need to. 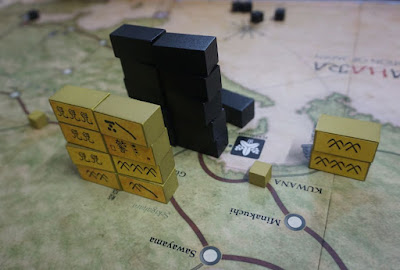 In the end we did not fight the Sekigahara battle proper. The game ended when Tokugawa Ieyasu fell in battle in the north. However we did run a what-if simulation. It turned out that I would have lost the battle. That meant I was right in gambling on being able to kill Tokugawa. After the Sekigahara battle, I would still have some units left, and Chen Rui would not immediately control the area. Time was running out, but since I would be weaker, she would still have a chance to capture enough victory points. We did not further simulate the situation, but I was not optimistic about my prospects. 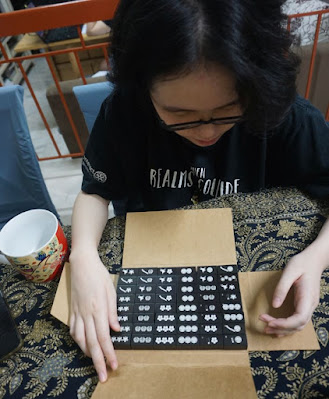 After the game Chen Rui studied the troop composition of the clans. She found that there were at most two gun units and two cavalry units per clan. I had never bothered to count that.