Blast from the Past

By Hiew Chok Sien on January 19, 2022 • ( Leave a comment )
I recently came across an old photo which was taken shortly after I became a boardgame hobbyist. It brought back many memories and feelings, of when I first started out in this hobby, the kinds of games that were popular back then, and what made me buy the games I bought.

This is my collection in 2016, and you can contrast it against the photo below taken in 2004. The 2016 photo shows about 80% of my collection. I now realise I have not taken photos of my game collection for six years! I have not been buying many new games in recent years, so my collection now does not look all that different from 2016. 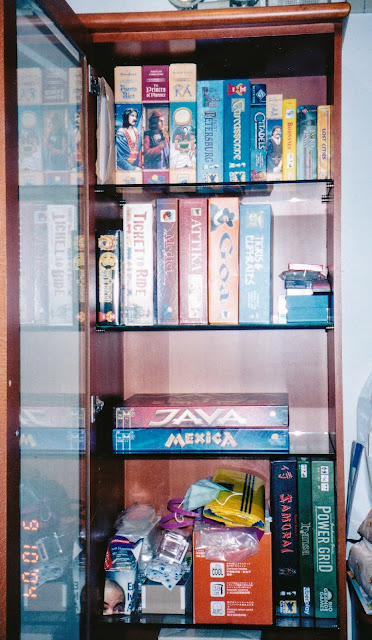 This is the photo from 2004 of my game collection then. This shelf was not bought specifically for boardgames. This photo was taken in Taipei. At the time I worked there on a long-term assignment, and my company rented an apartment for me. This was an existing shelf at the apartment.

When I look at these games, I feel I am transported back in time. These are games from a different age. Mexica has a newer edition now. Java has gone out of print. Many other games have newer editions now – Carcassonne, Ra, Medici, Saint Petersburg, Puerto Rico and Lost Cities. Samurai wasn’t mine. It was Crystal’s. I wasn’t particularly fond of it when I tried it then, so I didn’t order a copy. Crystal liked it very much so she got herself a copy. Good on her. This edition here is the best one. The later editions were not as pretty.

Ticket to Ride, Goa and Saint Petersburg are games released in 2004. Goa was a gift from Yoyo. I visited his boardgame cafe regularly then, and often ordered games from him. He had a copy of Goa with a slightly damaged box. He said if I didn’t mind he’d give it to me. I said yes thank you. The game inside was in perfect condition.

Most of the games in this photo are published before 2004, but they still represent the kind of games hobbyists would buy circa 2004. There is much sentimental value to me, and I would say there is some archaeological value too. The photo was taken with a film camera and not a digital camera. That’s archaeology!

Categories: Blast from the Past, Random Thoughts