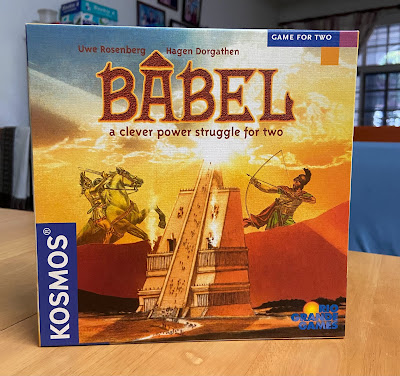 Babel is a game from 2000, designed by Uwe Rosenberg and Hagen Dorgathen. This was before Uwe Rosenberg transitioned from famous to very famous due to Agricola (2007). There was a period when Kosmos published a series of 2-players-only games, the most well-known one being Lost Cities. Babel was part of this series. It is not a new-to-me game. It’s just that I had not properly introduced it before.

The setting is the cradle of civilisation – Babylon. There are five tribes in the game, and you use them to help you build majestic towers. This is a game with much aggression. You steal, rob and destroy. It may be a 2-player game, but it is probably not an ideal spouse game, unless you are prepared to sleep on the sofa tonight. 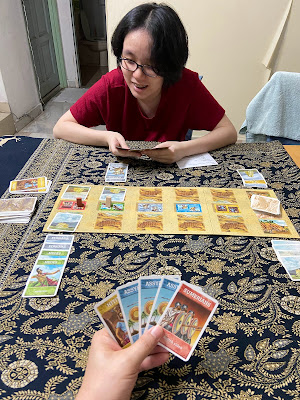 The board is divided into five regions. Each player gets to build his own tower in each of the regions. There are two types of cards in the game – tribe cards and tower cards. You draw and play tribe cards. Tower cards are numbered 1 to 6 and they are shared by both players. These are the tower levels you will build. You start a tower with a Level 1 card. You then stack a Level 2 card on it, then a Level 3, and so on, working towards Level 6. Level 6 is the highest you can ever go. 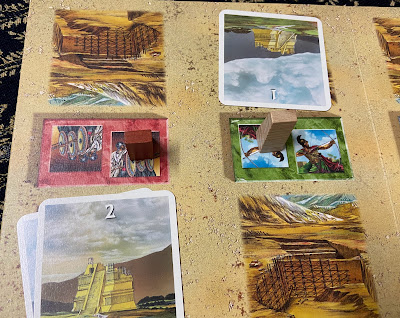 Each player has a marker. One player uses the red marker and the other the plain marker. To perform any action in a region, you must have your marker there first. The regions are colour-coded. To move your marker to a region you must play a card of the corresponding colour. To build a tower, you must have enough population supporting the height of the tower. This is another way you use your tribe cards. Playing a tribe card onto a region means you are getting that tribe to settle there. When a region has 1 tribe card, you may build a Level 1 temple. With 2 tribe cards, you may build up to Level 2, and so on and so forth.
So far this all sounds progressive and peaceful. Let’s move on to the more interesting bit – the tribe skills. 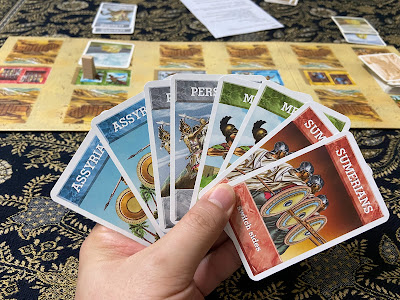 When you have 3 or more consecutive tribe cards of the same colour in play, you will be able to activate the skill of that tribe. To use the skill you must discard one of the cards. So if you only have 3 consecutive cards, you will be able to use the skill just once, because after that you will only have 2 consecutive cards left. If you have 4 consecutive cards, you can use the skill twice. The Assyrians destroy temples. The Hittites steal a temple level. The Sumerians steal one whole tribe from your opponent, getting them to join you. The Medes forces away one whole tribe from your opponent’s settlement. All of these can be very nasty. Only one tribe does something constructive. The Persians let you skip a level when you build your temple, e.g. you can go straight from Level 2 to Level 4.
One thing you can do once per turn is to move exactly three cards from one region to another. When you have 3 consecutive cards, you are effectively threatening your opponent in all five regions because with one move you can redeploy your cards to the region you want to attack. This is one scary aspect of the game. 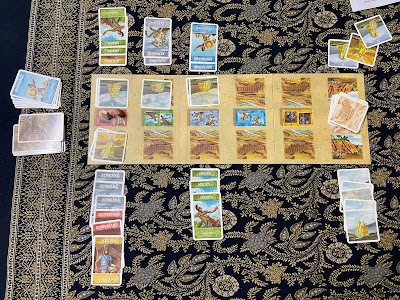 There is no limit to the number of actions you may take on your turn. You draw 3 cards at the start of your turn. Most actions require playing a card. If you accumulate many cards, you can play many of them within the same turn, pulling off a major offensive or making swift progress on a particular tower. However there is a risk when holding too many cards. All tribes have a second skill. They can force your opponent to discard half his cards.
In the photo above, the two columns of cards on the right are the tower cards. Tower cards are square. Although they are arranged on two sides of the board, they do not belong to either player. They form a common pool. You can only use the last card in either column. When you use a card, you free up the next one in the column.
To win the game, you aim for 15pts. If you reach 15pts while you opponent hasn’t reached 10pts, you win immediately. Otherwise you trigger the sudden death mode. In sudden death mode, whoever reaches 20pts first wins, or whoever falls below 10pts loses.
The Play
When playing this game I feel I have a lot of freedom. Since I am not limited to a fixed number of actions per turn, I have the flexibility to hoard cards and plan for powerful moves. It is always satisfying to pull off something clever which you have been positioning yourself for for the past few turns. You can score at most 6pts from one region, which means to reach 15pts you will need to build towers in at least 3 regions. It costs cards to keep moving your marker around. You would want to conserve your cards. You need cards to move your marker, to use the tribe skills and also to support the height of your towers. You are torn between all these needs.
Chen Rui greatly enjoyed using her Assyrians to demolish my towers. I had spent much blood and tears building them and she kicked them down like sand castles. That was painful.
At the end of your turn you always draw two tower cards to add to the column on your side of the board. The tower card columns keep changing. When there are tower cards you can use, you try to grab the opportunity. Having 5 regions gives you some flexibility. If you have multiple towers at different heights, it means you can use tower cards of multiple different values.
I kept a close eye on which tribes Chen Rui played together because I knew the tribe skills were scary. She not only destroyed my towers, she also stole my people and dispersed my people. What a horrible daughter I have. Later on I did take revenge and burnt her towers too. I also stole her tower levels. 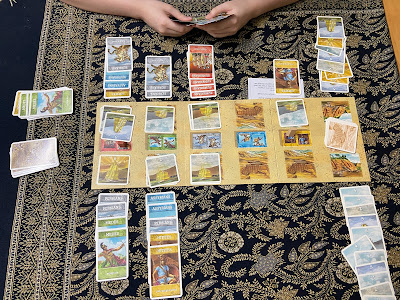 The four red Sumerians on Chen Rui’s side was a huge threat. They could steal all members of a tribe. If I were to assemble a big group of a particular tribe, she could steal them all away from me and then use their skill on me. That would be akin to me training a group of fighters, only to have them turn traitor and then attack me. So ungrateful! 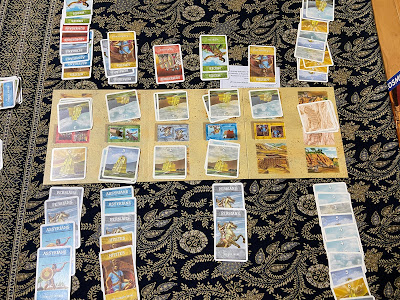 After much struggle I made it to 15pts. At the time Chen Rui had exactly 9pts, which meant I won without needing to go into sudden death mode. Despite losing the game, Chen Rui smugly declared that she had won in spirit. There is truth in that, because throughout the game she had been dominating and bullying me. I was so bruised and battered it was a minor miracle that I managed to crawl back to squeeze out a victory.
The Thoughts
Babel is the kind of game you want to play with no holds barred. If you want to play nice, you’d be missing the point. Go play Lost Cities instead. Babel is the kind of game where you’ll kick your opponent after he falls down. Twice. The theme may be about construction, but be prepared to do a lot of destruction. It is a rare gem among Eurogames. I like that it allows me to be creative and manoeuvre for big moves. I like the tension of defending against tribe skills while trying to pull off my own offensives. It’s a game of just one deck with 5 colours and another deck with 6 numbers. It is amazing how much excitement and player interaction come from such an unassuming package.