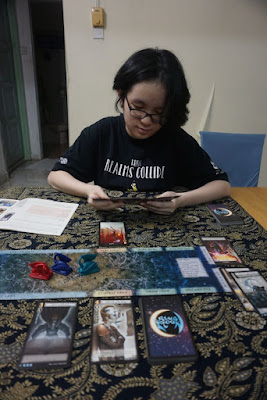 29 Dec 2021. I taught younger daughter Chen Rui Blue Moon, the 2-player-only card game by Reiner Knizia first published in 2004. Each player uses a preset deck of 30 unique cards. Each deck belongs to a race in the Blue Moon world, and there are eight basic races. The later expansions added a few minor races. When setting the game up, you place three dragons at the centre of the board. During play, you compete to attract dragons to your side by displaying your power. You win by convincing all dragons to work with you. 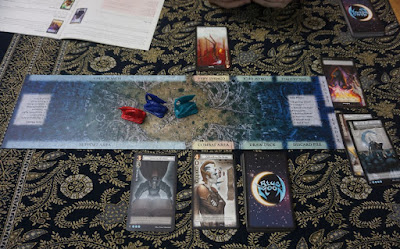 All the eight races in Blue Moon are very different. They have different strengths and abilities. With eight races there are already many different possible match-ups to play. You can also do some deck-building with the game, replacing some cards in your deck with those from other decks. There is a lot of replayability. Reiner Knizia said this was one of the most difficult games to design. With so many different cards and abilities, it must have been a lot of work to balance the whole system while giving every race unique characteristics. 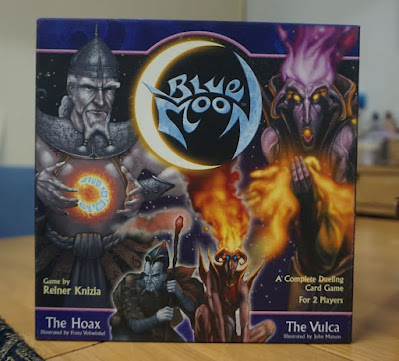 The base game comes with just two races, the Hoax and the Vulca. The other six basic races come in the form of small expansions. After these there are three more small expansions introducing new mechanisms and races. I am thankful I bought all of the expansions when they were still available. This edition of the game is now out of print. In 2014 there was a rerelease. All the 8 races and the 3 advanced expansions were put into one box and sold as Blue Moon Legends. This is a good deal. For the price of one boardgame you get the whole game system. However this newer version uses standard size cards. The first edition uses large cards, and I like that format better. The artwork used are the same, but there is some difference in the graphic design, probably to cater for the smaller card size. I prefer the older graphic design. The only thing I don’t like about the original edition is the game title artwork. The “Blue Moon” looks rather amateurish. 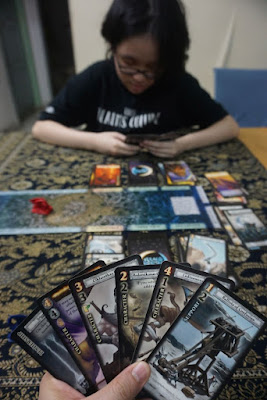 To truly enjoy Blue Moon you need to get to know the decks and the cards well. You need to understand the characteristics of each deck and how it is played and should be played against. If you play by simply making decisions based on the cards you draw, you are missing out on the strategic part of the game. When you get familiar with the decks, you start anticipating what cards you may draw, and you watch out for what your opponent may have up his sleeve. You play at a deeper level. 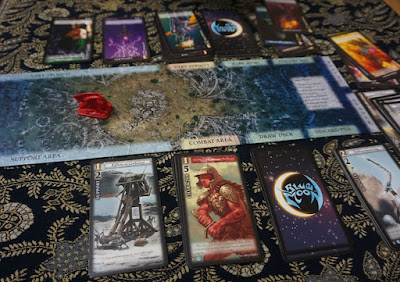 Chen Rui and I played three games back-to-back. She tried three different races, starting with the Vulca who are strong in fire. They are a more straight-forward race and often win by being powerful. Chen Rui thought they were just meh after losing to my Hoax deck. The Hoax are a trickster race, not as powerful but they have many clever weapons. Chen Rui then tried the Pillar, who deploy giant caterpillars which force their opponent to discard cards. She wasn’t impressed either. I played the Vulca against her Pillar, hoping to convince her that the Vulca was a decent race. For our third game Chen Rui played the Khind, a race which can fight in gangs, as opposed to other races which fight one-on-one. The Khind is a fun race to play. She had good card draws which allowed her to utilise well the Khind’s specialty. She defeated my Vulca deck soundly. 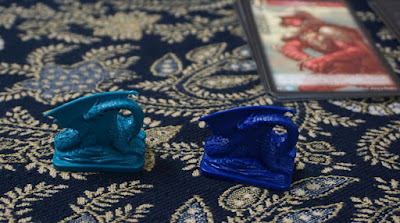 Dragons in the game. 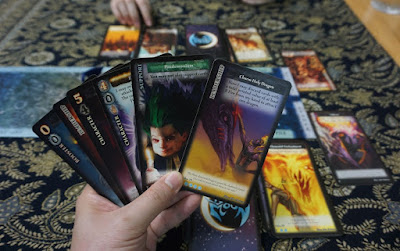 The cards are large and visually lush. Reiner Knizia later released another game called Blue Moon City which is based on the same Blue Moon world, but it is a very different game. I own that too and quite enjoy it. It is a 2 to 4 player game about rebuilding a city, as opposed to being a confrontational game. In fact it is a game which encourages collaboration.

When I compare playing Blue Moon and Attika, I find that I enjoy the experience of playing Attika more. Despite admiring how clever and well-balanced Blue Moon is and how much character each of its races have, on the emotional level I feel more happy when I play Attika. Playing and experiencing games is still primarily about the emotions and not logic or technicality.

I have tried all eight basic races in Blue Moon, but up till now I still have not tried any of the three advanced expansions. I still feel I have not played the basics enough to qualify to play the advanced game. Perhaps I should think of them as variants rather than an advanced version. 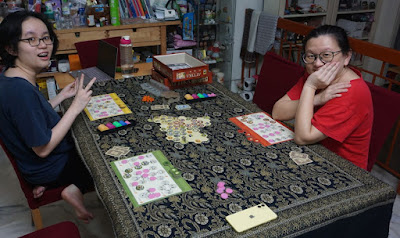 31 Dec 2021. This time when we played Attika my wife Michelle wanted to join us. I was surprised she still remembered the rules and didn’t need any refresher. However she did make one rule mistake which put her at a disadvantage. She thought that she needed two cards of the same resource to make a joker. You can actually use any two cards as a joker, regardless of resource type. She only discovered this error near game end. I remember we did play this rule wrong in the past, when we started playing the game many years ago. Her memory is too good and she remembered this wrong version we have played before. 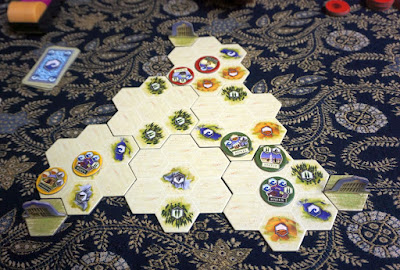 With three players, we set up three temples. The map at setup is larger too. We started our game with each of us staking out one temple. This was a conservative approach. 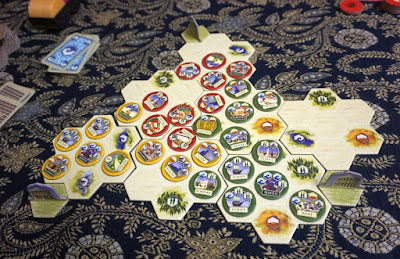 As we expanded we raced toward the centre, and soon established the front lines. 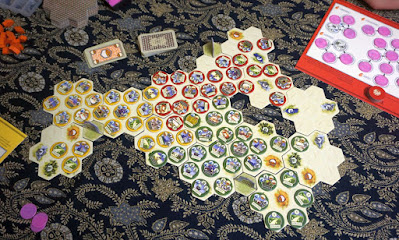 This was one tidy game. After splitting the initial land three ways, we always expanded in our respective backyards. This was a safe and peaceful game, which meant efficiency was important. The initial land grab as we rushed the centre was exciting, but after that there was little aggression. We didn’t allow our opponents lucrative opportunities to jump to our backyards. 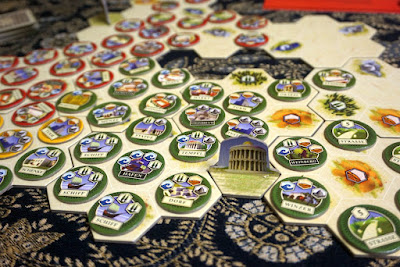 This temple was almost completely surrounded by my buildings. 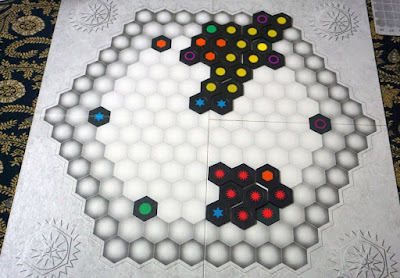 1 Jan 2022. Michelle said we should play a game as a family on New Year’s Day, and she suggested Ingenious. So this time elder daughter Shee Yun joined us. I later realised I had forgotten a rule. In the very first round, every player must place her tile next to a different starting shape printed on the board. In our games, once the first player placed her tile, everyone else would place theirs next to this tile, because that would earn more points. This was unfair for the starting player. 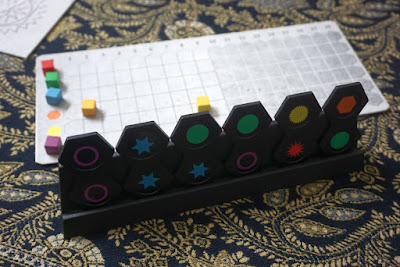 Ingenious may look like a dry abstract game, but when playing it there is actually much drama and emotions. You score points in six different colours, and your final score is based on your lowest scoring colour. That means you must score your six colours evenly and not allow any to fall behind. If any of your colours hit the maximum score of 18, you get to shout “Ingenious!” to congratulate yourself and then play one more tile. This is a wonderful feeling. You feel clever, and being able to play another tile is certainly helpful too. It is always tempting to go for this high, even though you have to keep reminding yourself to grow your points evenly. 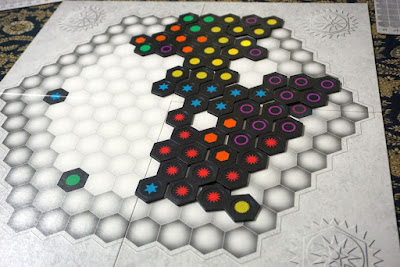 I tended to be conservative and didn’t push for the max points much, but everyone else loved going for the max. It was certainly fun. 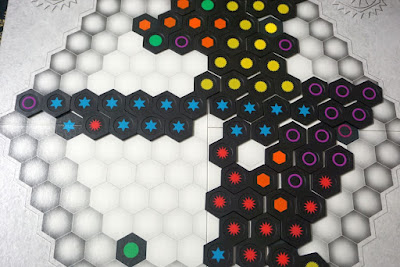 That very long row of blue stars gave us tons of blue points. We did not emphasise much on stopping the next player from scoring a lot of points, which was probably not the best way to play. We just enjoyed scoring lots of points ourselves. 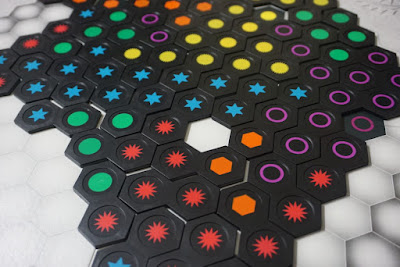 We had so much fun that once we finished our first game, we decided to go again. Ingenious runs smooth and is constantly engaging. Even when it is not your turn you will be watching the board and hoping your opponents won’t take that perfect spot you are eyeing. The children won both games. Shee Yun won the first one and Chen Rui the second. Kids 2, Mum & Dad 0.