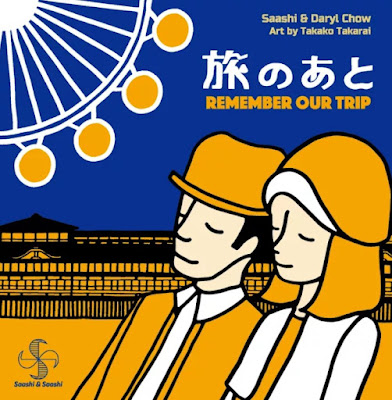 The Game
Remember Our Trip has a very unusual setting. You and a group of friends have just returned from a holiday. You meet up and chat about your recent trip – the landmarks you visited, the hotels you stayed in, the restaurants you liked and of course the shopping too. However all of you remember the locations slightly differently. You debate about the precise locations of the places you visited. You try to gather your snippets of memories to piece together the right locations. Whoever remembers the locations of your vacation stops best wins the game.
By this description above, you probably have no idea at all how the game plays. Let’s look at how all this is translated into game mechanisms. 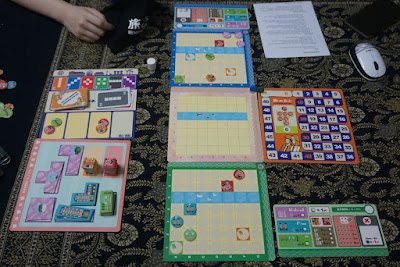 Every player starts with his own blank map – his player board. There is a shared blank map placed at the centre too, representing the true map. Your player board represents what you recall of the city you visited. In this game there are two cities you can play – Kyoto and Singapore. The city in play above is Kyoto. During the game you will place memory tokens (snippets of memory you recall) on your player board and try to form groups of specific sizes and shapes. When you succeed in making a valid group, you fully remember the location of a certain type of building, and you will get to mark that building on the true map. 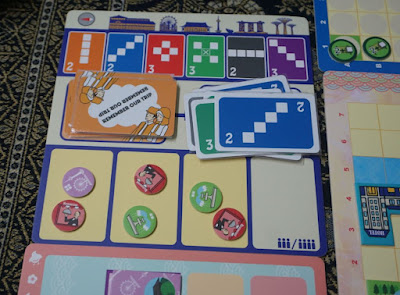 The game is played over 12 rounds. Every round a memory card is revealed. It specifies a configuration, and you must place tokens in this specific configuration. The memory card also specifies the number of tokens to be placed. Groups of tokens will be drawn from a bag, and players take turns to claim a group to be placed onto their respective player boards. 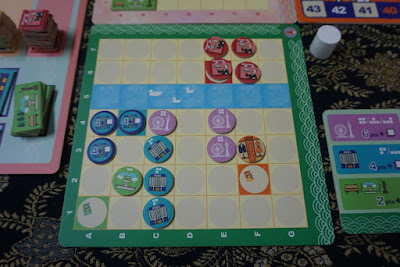 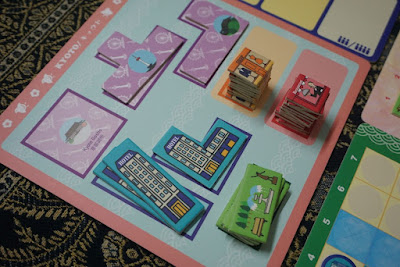 These are the real buildings which will be placed onto the true map. The violet buildings are landmarks, the blue are hotels, the green are gardens, the orange are shops and the red are restaurants. 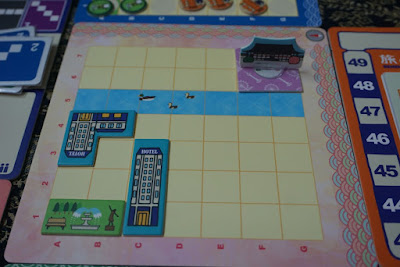 This was Kyoto in the early stage of our game. Only landmarks (top right) get a standee. Other buildings remain 2D. 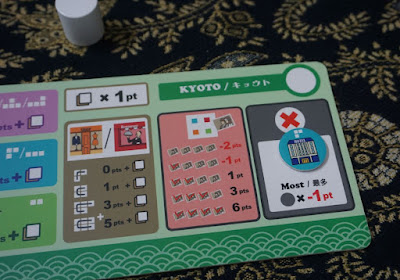 When the game starts your player board is empty so there is plenty of space and much flexibility in placing tokens. In the late game it gets harder and harder to place tokens, since the configurations are very strict. If you are unable to place a token, you put it in a mistaken memory area. Sometimes you may decide to discard a token to make way for a new token. In this case the discarded token goes to the mistaken memory area too. When the game ends, the player with the most tokens in his mistake memory area loses points, at 1pt per token.
The game is mostly about forming valid groups on your player boards to score points. Hopefully you also get to place buildings on the true map, because that means you will score more points. A mission is announced when the game starts. You also score points if you fulfil the mission by game end. Missions are along the lines of having two groups of shops on your player board.
The Play
When I started playing Remembering Our Trip it felt weird. The idea is quite unusual. Explaining the game takes some effort. You really need to sit down and play it to get a grasp of what’s going on. Play a few rounds, and you’ll realise it’s actually quite simple. When explaining it it sounds like a medium-complexity game. Once you play it, you’ll find that it is a light game.
There is a race element to it, because you are competing to be first to claim spots on the true map. You try to form valid groups as quickly as possible. Sometimes you compete for the same type of token. Sometimes you take tokens your opponents need even when you don’t really need those tokens yourself, for the stake of preventing them from forming valid groups. It’s not always constructive, but sometimes it’s necessary.
The game becomes more and more challenging towards the end, because the boards get full and you have less wriggling space.
On every player board there are four photo spots. These are at the same coordinates for everyone. They represent photos you have taken together during your trip, and you can see what type of buildings are in the background. This means there really is no excuse for remembering these locations wrong. You need to try to match the building types specified by these photo spots. Depending on how well your tokens match them, you gain or lose points at game end. This mechanism adds to the story and also helps encourage some consistency between player boards. It adds a little realism. Afterall, we were on the same trip and should not be remembering completely different things. 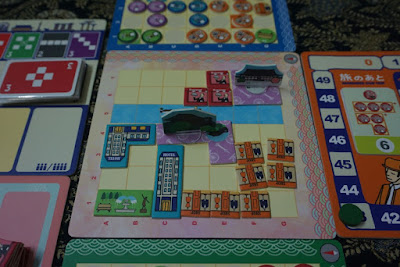 I played with younger daughter Chen Rui and this was our true map when the game ended. We had two landmarks (violet), two hotels (blue), one garden (green) and one group each of shops (orange) and restaurants (red). 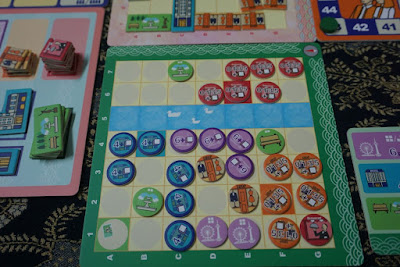 This was my player board. You can compare this with the photo above to see the differences. 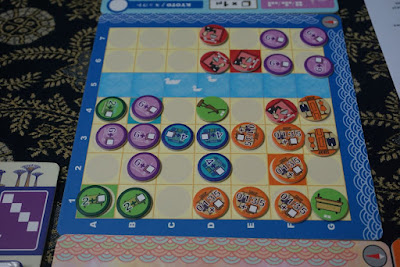 This was Chen Rui’s player board, and you can do the same comparison.
The Thoughts
I enjoy trying games from Japan, because they often have innovative ideas. Remember Our Trip is this kind of game. It’s creative and fresh. I can’t say for sure yet that it’s highly replayable, but I feel happy having tried it because it feels like enjoying a scenery you have never imagined before.