The Game
Escape Team is an escape room game, like the Exit and Unlock series. You play it with the support of a mobile phone app. This part is similar to Unlock. What I find interesting about the game is it does not provide any game components. This is a clever publishing model. You download the app. You print out sheets of paper yourself and you prepare your own pens and scissors.
A game is a series of puzzles which you need to solve within a time limit. The puzzles are all laid out in the printouts. The answer of each puzzle is a 5 digit code which you need to key in to the app to check whether you are correct. The app is also your countdown timer. So far there are 11 missions released. Each mission is one complete game. The easy ones only take 10 minutes. Complex ones go for 40 minutes. Two introductory missions are free. The rest need to be paid for. You can download and print the puzzles, but without unlocking the missions in the app, you won’t be able to check your answers or get clues. I find this a very clever business model. There is no need to worry about physical components, warehousing or shipping. Players download the app and prepare their own physical components. 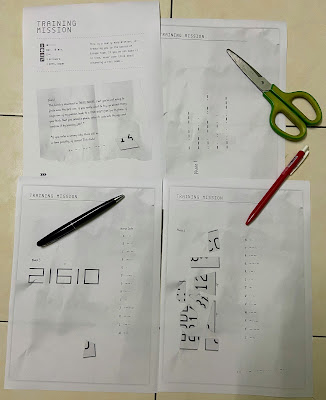 This is one of the free missions. Just four sheets of paper.
The Play

One thing the app provides is background music. It creates quite a tense atmosphere and I like it. It certainly made me nervous. At certain internals clues are provided. You don’t have to read the clues. You will see a notification and it is up to you whether you want to open the clues screen. I only use the clues when I feel truly stuck. When I played with younger daughter Chen Rui, most of the clues were not helpful to us because we had already thought of what those clues suggested. Only one clue truly helped us solve one of the puzzles. Chen Rui complained about the useless clues. I guess another way to look at it is we are clever and don’t need those clues which most other people would find helpful.

The game is recommended for 2 to 4 players. Technically it can be played solo. I did that for the easy missions. However it was a little dull. I didn’t have anyone to discuss with or bounce ideas off. Some of the work can be divided, e.g. cutting out pieces of paper. It’s just tedious work and having someone being in charge while others continue to work on other aspects is a good thing. The different puzzles within a mission can also be distributed to different players. If someone finds the solution to Puzzle 2 while Puzzle 1 is still being solved, you can write it down to be entered later after you solve Puzzle 1. This certainly helps in completing the missions within the time limit.

The early missions were rather easy. After trying those I directly skipped to Mission 9, which had the highest difficulty rating. We lost that one. We failed to solve all the puzzles within the time allotted. This time though there were some challenging puzzles. It was more interesting. It had the kind of puzzles which required some creativity and lateral thinking, and not just problems that took time to solve, like piecing jigsaw puzzles together. 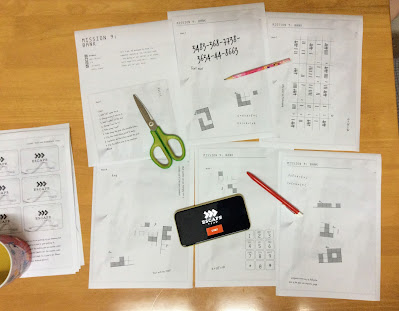 Mission 9
The Thoughts
I am not specifically fond of escape room games or puzzle games. I played many games of Exit only because my wife Michelle suggested to buy more to play as a family. Escape Team is certainly convenient. Some of the puzzles are clever. I didn’t like the easier missions, especially those that required a lot of cutting. It felt tedious. I can understand that the free missions are easy so that they are a good introduction to the game. New players get to learn the system. They feel happy when they are successful in completing the mission. I just wonder whether it might have the opposite effect on some players. In my case had I tried only the first two missions, I would not have paid to unlock further missions, because the first two weren’t all that interesting to me. The publisher invited me to review the game and gave me access to all the currently available missions. Since I had said yes, I continued playing and picked the hardest difficulty level the third time around. It was certainly better than the easy games. If this sounds interesting, check out the game at https://www.escape-team.com/.