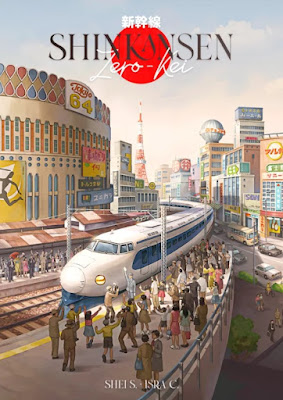 The Game
Shinkansen: Zero Kei is a game set in the period of 1959 – 1964, when the shinkansen or bullet train was first built. Players build this high-speed train line between Osaka and Tokyo together. In history, the project was completed just in time for the Tokyo Olympic Games in 1964. However in this game you may not complete the whole project. The game is played over 5 rounds. Whoever scores the most points wins. 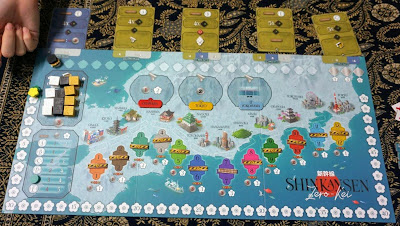 During setup you lay out five event cards semi-randomly based on the number of players (those along the top edge). Every round the corresponding event card determines some rules to follow for that specific round. There are 12 cities on the board and these are where the shinkansen passes through. 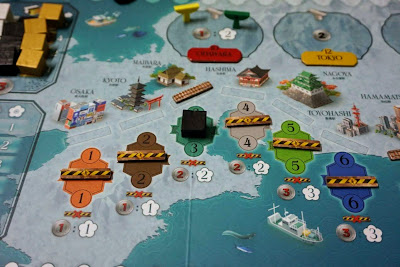 Every city starts with an Under Construction sign. The first thing you need to do at a city is to prepare the grounds, represented by removing the Under Construction sign. After that there are two more things to do, and they can be done in either order. You have to lay tracks, and you have to build a station. Once all three tasks are completed at a city, the shinkansen is online for this city. When you perform these tasks, you earn points.

The most important and interesting mechanism in the game is picking train carriages. Everyone starts the game with a tiny train in front of him, just an engine card and an end carriage card. Every round you will claim a train carriage to be inserted just before your end carriage, growing your train. Each carriage has either an action space or a special power. You make use of the action spaces on your train cards to perform actions. You start with only two actions (your engine card and your end carriage card), and as the game progresses you increase your options.
Everyone starts with a different engine with different action types. On your turn you may use your opponents’ engines, but you must pay a fee to do so.
You pick new carriages based on turn order. Once everyone has made his choice, you claim your respective cards from left to right. After you claim your carriage, you move your player marker onto the player order board to claim a spot. Depending on which turn order you pick, you receive a different benefit. What all this means is when you choose a carriage, depending on how far left it is positioned, you influence your turn order for the next round. 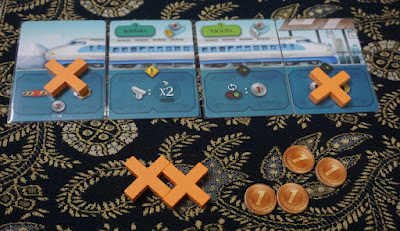 Your private train looks like this, with your engine card on the left and your end carriage card on the right. Every round players will perform at most 5 actions. You use these crosses to mark actions you take. If you run out of action spaces to use or decide not to perform any more actions, you forfeit your remaining actions for $1 each.
Carriage cards have one or two city names. This is a big part of the game-end scoring. You will score points based on the cities. If construction is completed at the city, you score the value of the station, which can range from 1VP to 6VP. If the city appears twice in your private train, you score double, and so on and so forth. If the city doesn’t have any track laid, you are going to lose points. Similarly if that city appears twice in your train, you will suffer double the penalty.
In addition to the point values of the cities, you also score the longest connected route your private train serves. You count the longest ascending sequence of cities within your train which are connected. Because of this scoring, you will try to collect carriages in ascending order, or you may need to perform actions which let you move carriages around. 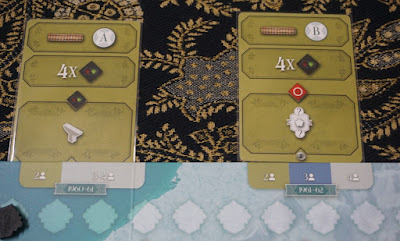 The event cards decide: (1) the price of laying tracks, (2) the number of actions players may perform for the round, (3) the extra action space or special rule for the round. 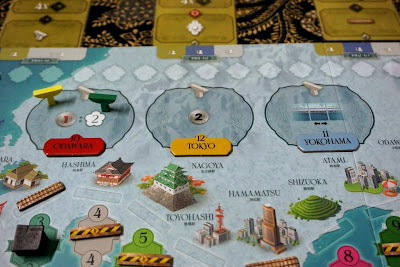 During setup three of the cities will be designated as Olympic venues. You may place cauldrons here to make use of their special abilities. When the game ends, you lose points for unused cauldrons. Olympic venues are scored slightly differently. Only players with the most cauldrons may score these cities. 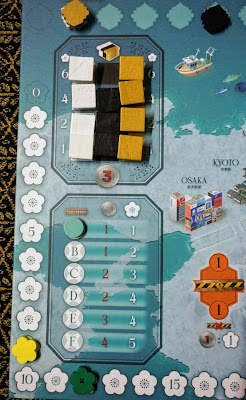 The first table above shows three columns of train stations. The earlier you build a station, the more points you score for this build action. The first station in each colour scores 6VP for the build action. The last one being built will only be worth 1VP. When the game ends, the stations will be worth 1VP, 3VP or 6VP. This is a separate thing from the build action. During the game you manipulate the values of the three station colours in order to maximise your score.
The second table is the price chart for laying tracks. It shows the action cost and the victory point reward (sakura flower icon). Which row to use is determined by the event card of the round.
The Play
I did a 2-player game with younger daughter Chen Rui. I realised that the adjustment of the event cards based on player count was mainly to ensure the total number of actions performed throughout the game did not vary too much. At a lower player count, everyone performs more actions so that decent progress can be made. At a higher player count, individual players perform fewer actions so that the shinkansen project doesn’t finish too easily.
In the early game there wasn’t a lot to do, since we didn’t have much money or carriages. It felt like we must fully utilised all the action spaces we had access to. It didn’t make sense to forfeit actions for money. Picking carriages was the important decision. It decided what we could do in future rounds, and also how we would score points at game end. I feel the best strategy is to focus on just a few cities and then concentrate your efforts on maximising the values of just these cities. I wouldn’t want to commit to too many cities because I wouldn’t be able to develop all of them well. It is much more efficient to focus on just a few.
Manipulating the station value is a big part of the game. You want to increase the values of cities you have a vested interest in. You try to screw over your opponents. If your opponents have developed certain cities well, you should try to grab carriages with these cities. You would be leeching off their hard work. Claiming carriages is supposed to be a tricky decision. You might be caught between two conflicting needs. The city on the carriage card may have good potential, but the action space on it may not be very useful to you. Or it can be the other way round. However I find that in the early game, the action space is probably more important because you will be using it many times for the rest of the game. The city is less critical since nobody has a clear idea which one will be more valuable yet. In the late game, the action space is less important because you won’t be using it that many more times. The city is probably the bigger consideration because you have a good idea which ones will be more valuable.
There are some tactical plays, quick wins that you want to exploit. Whoever builds the first station in a particular colour scores 6VP, which is a lot. You probably want to go for it, even if the station becomes a lousy 1VP station at game end. If you know that station will be low-valued, you can build it at your opponent’s city. That’s a low blow, but all’s fair in love and war. 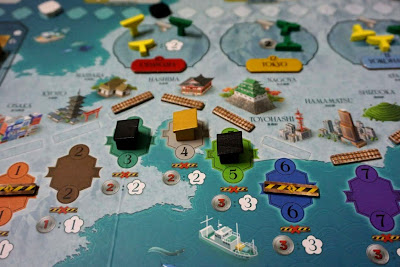 At this point, city #3 (Maibara) and city #5 (Nagoya) were online – both station and tracks built. 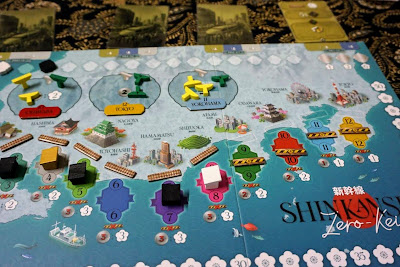 When our game ended, cities #9 to #12 still had zero development. Our three Olympic venues were #10 (Odawara), #11 (Yokohama) and #12 (Tokyo). No one bothered with them because neither of us had carriages with these cities. 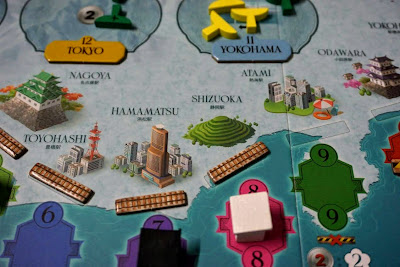 On the board every city is represented by a landmark, which is nice.
The Thoughts
If I break down the structure and the mechanisms, it seems Shinkansen: Zero Kei should be an interesting mid-weight strategy game. There are tactical wins to make. You choose carriages to augment the action spaces available to you, while the same choices decide how you will score at game end. You compete in manipulating the station values so that you maximise your end-game scoring. However when I play the game, it feels a little dull and simplistic. There are only 5 rounds, so I collect around 5 new carriages. There is not much manoeuvring to do. I just focus on creating a small stretch with some duplicate cities and maximising the station values of my cities. I can’t see the benefit of spreading myself to many cities. Yes, I’d earn a few more points for having more connected cities in my longest route, but it would be so much more work, and I might not be able to maximise my station values for all these cities.
Possibly I didn’t enjoy my play because it was a 2-player game. On boardgamegeek.com most think 3 players is the ideal count. Some specifically recommended against 2 players. With more players, the distribution of cities in the players’ private trains may indeed be wider. Creating a connected stretch might be more challenging. The complexity in player interaction will likely be higher and more interesting. They need to work together to build the line and yet they are actually competing.