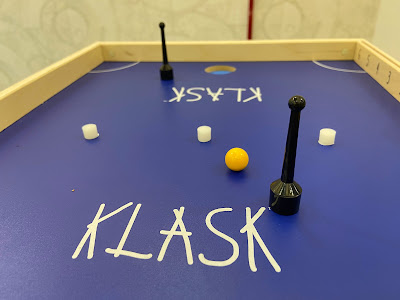 I want to call Klask a sports game, but that will likely cause misunderstanding. When I say sports game people think of sports themed games. I classify it as a dexterity game, but I know that is problematic too, because people think Jenga and Toc Toc Woodman when we say dexterity game. Or Animal Upon Animal. Technically it is a real-time game too. I’m probably making things worse by throwing all these descriptions about. Klask is a game of skill for two players. I find it best to describe it based on football (soccer). 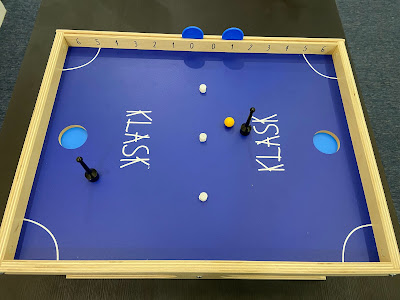 The field is surrounded by walls, which means the ball will bounce off these walls. The two players each control just one pawn. You can only move your pawn within your half of the field. You have a goal – the round indent in light blue. Your objective is to score a goal – getting the ball into your opponent’s goal. Whoever scores 6 points first wins the game. 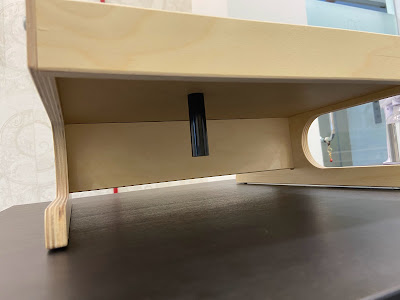 You control your pawn using this rod beneath the board. Both this rod and the pawn have magnets. That’s how they are attached to each other. 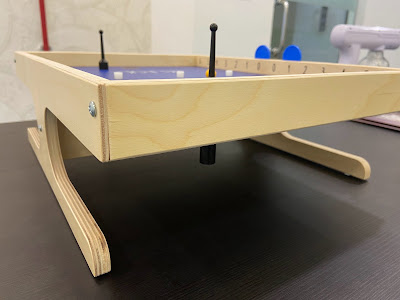 The magnets are strong, so when you move the rod below the board, the pawn on the field follows suit quickly. It gives you good control. The pawn is very responsive. However if you move too fast, you can still lose control of your pawn. If this happens your opponent scores 1 point. 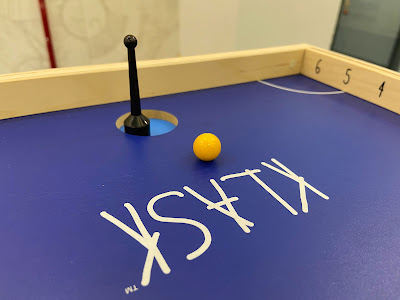 You also give your opponent a point if your pawn falls into your own goal. 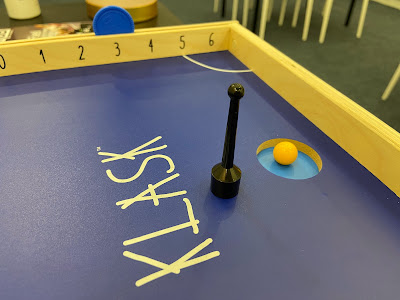 The standard way of scoring points is to score a goal, but there are many fouls which will award points to your opponent. New players will often commit these fouls. When players are new, you will likely score more points from your opponent’s mistakes than from actual goals. 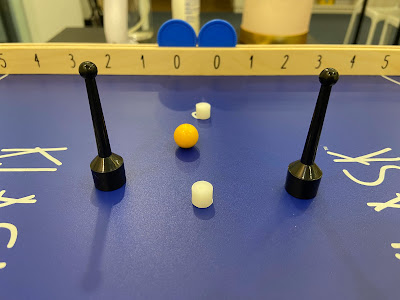 One important element are the three white obstacles in the game. When a round starts (i.e. at the start of the game, or after a player scores and the board is reset) the three obstacles are lined up at specific positions in the middle of the field. These obstacles contain metal. If your pawn gets close, it will attract the obstacle. If you ever get two obstacles attached to your pawn, you concede a point to your opponent. The obstacles can get in your way and also blocks the ball. 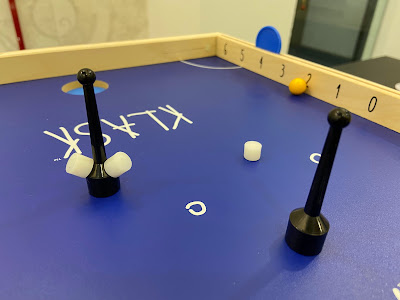 When a pawn catches two obstacles, we call it Mickey Mouse. It looks like it has two huge ears.
Whenever any player scores a point, the field has to be reset. The obstacles are repositioned. The player who conceded a point gets to serve, and must start the ball in one of his corners. Whoever reaches 6 points first wins.
The Play
Your first game of Klask will be exciting and funny. Since you are unfamiliar with it, you will be clumsy and you will likely commit many fouls. Scoring a goal will be challenging, but when you manage it, you’ll stand up and cheer. Klask is this kind of game. The rules are simple. Any observer standing next to you will be able to pick up the game immediately and be able to play the next game. Learning the game is mostly about getting familiar with controlling the pawn. If you are new and you play against an experienced player, you will be at a disadvantage. There is skill in this game. As you get better at the game, it becomes more challenging and rewarding. Maybe less funny, but more intense.
The three obstacles are a clever and important element of the game. You can intentionally knock them to your opponent’s half and thus hinder his movement. He will need to carefully avoid the obstacles. Although the obstacles contain metal and can be attracted by your pawn when you get too close, if you are fast and hit them hard, you can actually use your pawn to knock them to your opponent’s side. It’s a little risky, but it’s doable. 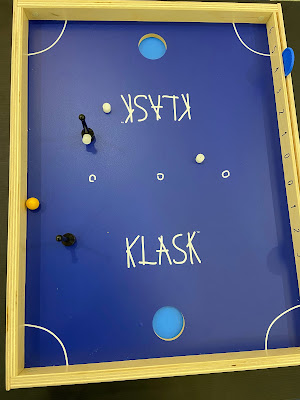 If you can get all three obstacles into your opponent’s half, you will give him a big headache.
The Thoughts
Klask is a game of wide appeal. It is a mass market game. It is easy to learn and fast to play (probably 5-10 minutes). Once you get better at it, it becomes more and more a game of skill, and that can be satisfying. This is the kind of game which startup companies put at their pantries, so that employees taking a break can play a couple of rounds. It’s much smaller and more portable than foosball.