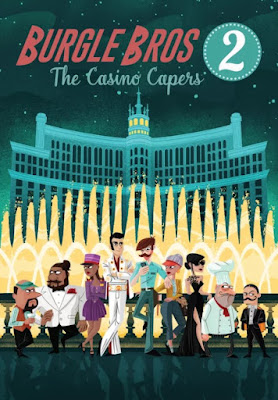 Burgle Bros 2 is a cooperative game. You are a team of professional thieves. You are going to a casino to break into its safe and to complete a specific mission after that. You win the game by achieving this. As you attempt to do this, the bouncers are constantly looking out for suspicious people like you. If anyone from your team gets 6 heat (a measure of how suspicious-looking you are), he or she is immediately taken away by the security team, and you lose the game. 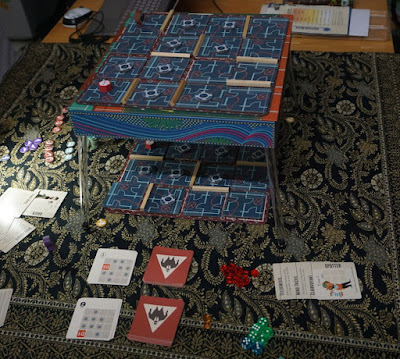 Everyone plays a different character and gets 3 unique abilities. 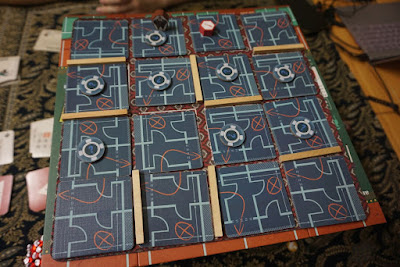 When setting up the two floors, all the room tiles are shuffled and placed face-down. There are many different rooms in the casino like the restaurant, the pool, the roulette room and the surveillance room. The rooms have various powers, some of which will help you while others will give you trouble. You have to set up walls too – the wooden sticks. Now that I have played the game, this way (photo above) of setting up walls is absolutely terrible. A better way would be to create longer paths for the bouncer.
During setup you also place chips face-down. These chips are people you will meet as you explore the casino. Some are good and some are bad. Finally you set up one bouncer per floor, who will be patrolling the casino. You also set up their next destinations. Whenever a bouncer reaches his destination, you draw a new patrol card to determine his next destination. Players need to avoid the bouncer because every time you meet him, you get 2 heat. When the patrol card deck runs out, the bouncer starts to actively hunt the players – he keeps moving towards the nearest player instead of the destination marker. 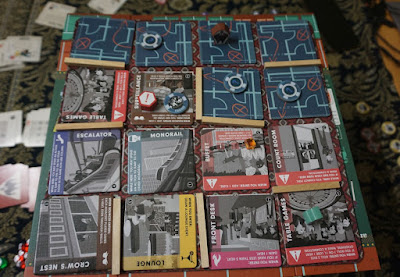 When the game starts, you will be exploring the casino floor and uncovering the chips. Two of the actions you get to perform in the game are peek and move. If you move onto an unknown tile and an unknown chip, you flip over the chip and resolve it, and then you flip over the tile and resolve it. It’s a bit of a gamble since you don’t know what they are beforehand. You can choose to peek first, but that takes up an action. Also some of the bad chips are activated when you peek. There are two types of bad chips. One type triggers when being peeked at, and the other type triggers when you move onto it. When you reveal them using the other method, they are discarded without effect. In the early game, there is no easy way to decide whether it’s better to peek or to move in directly. 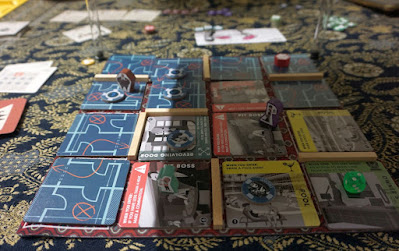 There are good chips, and they are your moles inside the casino. They provide the tools (dice) for you to crack the safe. You will first place the tools in the office (on the lower floor). You then need to spend actions to move the tools to the safe room (on the upper floor). Finally you have to spend actions at the safe room to crack the safe. In this photo above you can see the office at the bottom right, with one die on it. 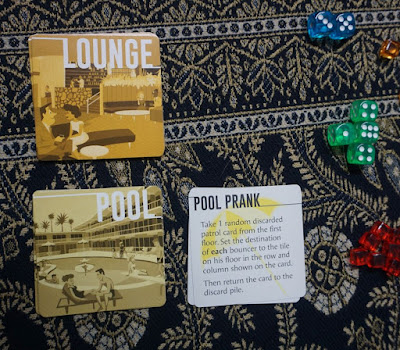 The lounge and the pool are two rooms which force you to draw a card from a deck. The cards are usually bad, but not always. 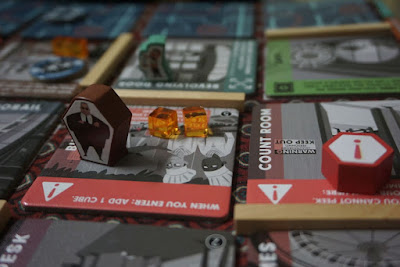 One of the things you get to do in the game is to create commotions. The effect of this is to set a new destination for the patrolling bouncer. Naturally when there’s sign of trouble the bouncer will rush to the scene. You move the destination marker to the place where the commotion is. Creating commotions lets you distract and misdirect the bouncer. However not all commotions are deliberately planned. Sometimes you make a mess by accidentally knocking over the ice sculpture, causing the bouncer to come in your direction. 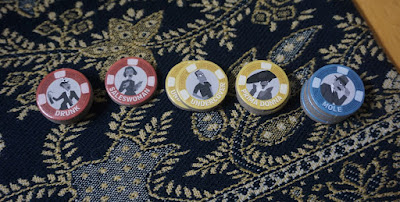 Red and yellow chips are bad. Blue chips are good. The blue ones are the moles who are helping you. The worst type is the saleswoman, who ties you down and won’t let you move. You need another player to come rescue you, or you need to use some special ability to get away from her. The drunk causes you to tumble into the next room. The undercover security guy summons the bouncer. The prima donna demands your attention.
The game can be played almost in a legacy format. There are 9 different missions in the game, and you can play a campaign which is basically the 9 missions played in sequence. Whenever you win a game, the next one is adjusted to be harder, and vice versa. The difficulty is adjusted by tweaking the bouncers’ patrol decks. Cards are removed to make the game harder, and added to make the game easier. The sooner the deck runs out, the earlier the bouncers start hunting the players. When playing in campaign mode, after a game ends, a new special ability of one of the characters is introduced, giving the players more options. Once you are done with the campaign, you can still play standalone games. You just pick a random mission.
The Play
Younger daughter Chen Rui and I tried one game. The first half of the game was all about exploring and discovering the lay of the land. We had to reveal all the chips and the tiles. We had to find the moles so that we could collect the tools (dice) for cracking the safe. We needed to find both the office and the safe room. We also needed to find the means to move to the upper floor. We had many chips and tiles to process. The discovering stage was about surviving surprises while doing recon on terrain, so that we could then plan how exactly we were going to complete our mission. We had to pay attention to the patrolling bouncers and avoid them as much as possible. We had to watch how quickly the patrol decks were running out because once they ran out, the bouncers would be actively hunting us down.
The first game felt tedious. We had to look up the rulebook frequently to see how the different personalities on the chips worked, and how the tiles worked. There was text on the tiles, but sometimes we needed a more detailed explanation. It got better once we were more familiar with the chips and the titles. The exploration stage was mostly about surviving bad luck and occasionally utilising good luck. When most of the chips were not revealed yet, we had little basis to decide whether to peek or to move in. Our main consideration was how far the bouncer was. If he was far we could probably afford taking some risk.
The game switched to become more strategic once most of the chips and tiles were revealed. We moved to the problem-solving stage. Burgle Bros 2 is a race against time. The patrol decks of the bouncers are the countdown mechanism. Things will get tough when the bouncers start actively hunting you. We found that having more than one player on a floor was difficult. When both Chen Rui and I were on the same floor, after I took my turn, the bouncer would patrol twice before my turn came around again. It would be easy for him to catch me.
We didn’t last very long. We did manage to explore most of both of the floors, i.e. we were just getting into the problem-solving stage. However I took more than 6 heat then and I was detained. One of the tiles was a surveillance room, and every time a bouncer entered, a counter was added. Once there were four counters, every player on the same floor as the room received 2 heat. That was how we lost the game. An unexpected incident brought the bouncer to the room and we were not prepared for it.
The Thoughts

Burgle Bros 2 didn’t work for me. I got impatient when playing. We had to handle every chip and every tile we turned over. Some tiles required drawing cards from a deck and resolving them. Every character has its own special abilities. I get the feeling the game wants to have more stuff for the sake of having more stuff. In this case more does not translate to more fun. It felt like more work to me. The premise is actually interesting. It’s a heist movie thing. I just didn’t like the execution.

The two floors are eye-catching. I find it just a gimmick and not practical. I can understand it’s good for making the game stand out. I don’t like it because the platform for the upper floor blocks my view. It’s less convenient for me to look at other players’ play areas and also to look at the lower floor. Maybe my dining room is not bright enough. It takes some effort to read the text on the tiles on the lower floor.

I may be a little unfair to the game, since I’ve only played about half a game. I didn’t even get to start cracking the safe. So don’t just take my word. Decide for yourself whether this is something you might enjoy.