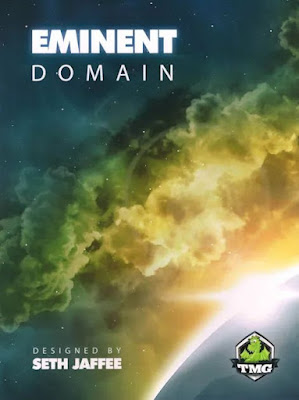 The Game
Eminent Domain is a 2011 game, and one of the early deck-building games. Dominion, the first deck-building game, came out in 2008. The setting of Eminent Domain is the same as Race for the Galaxy. You are expanding your intergalactic expire through conquest and colonisation. You develop new technology. You produce goods and engage in trade. Some of the game mechanisms are similar too, in how you pick a particular role to perform actions, and everyone else gets to perform a similar action. This is like Puerto Rico, San Juan and Glory to Rome. You build your empire, and eventually your planets and technology are worth points. Doing trading gets you points too. When the game ends the highest scorer wins.

The game starts with everyone having a personal card deck which is exactly the same and one uncolonised planet. Your hand limit is five. On your turn you do two things. You play a card to perform an action (which is specified on the card), and then you play a card to select a role. Selecting a role means you perform an action related to the role. Other players get to follow you if they have the right cards, i.e. perform the same role, but as the active player you enjoy some privilege. Before you end your turn, you may discard cards from your hand. You then draw back up to your hand limit. If you have more cards than allowed, you have to discard down to your hand limit. What you do on a turn is quite simple. 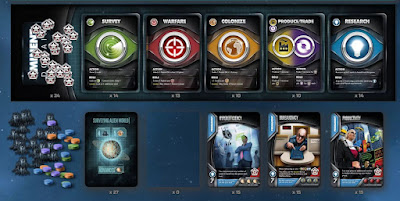 Let’s talk about the roles. There are five. When you pick a role, you claim a role card from the centre of the table. This becomes your card and it boosts your action. This is how you augment your deck. The more you perform a certain role, your deck becomes better at that role, whether you like it or not. If you have multiple cards with the same role icon in your hand, you can play them all to boost your action. E.g. a planet may take 5 colonisation cards to colonise. If you happen to have 5 colonisation cards, you can play them all within one turn and complete the colonisation, as opposed to spending 2 or 3 turns doing it.

The roles in the game are survey, colonise, warfare, product/trade and research. You survey to find new planets. You colonise or conduct warfare to capture planets. You use the same role to produce and later to trade. Earning victory point chips is a two-step process. 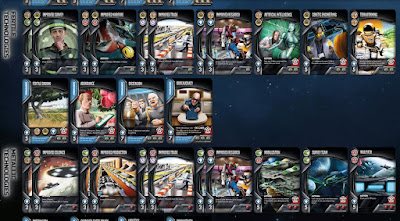 Doing research gets you new cards which are more powerful than the basic role cards. In addition to special powers, they also have role icons. So they can be used to boost role actions. It seems wasteful to use them for merely boosting a role action, as opposed to using their special powers, but sometimes it’s worth it. It’s better to look at it this way – tech cards give you an additional option.

Many of the tech cards have the same power, only the combinations of the role icons are different. This is a valid consideration when you decide what to research. In addition to the research cost, there is also a planet requirement when you research. E.g. you need to have two planets of the fertile type in your empire before you can research a particular tech. So research and colonisation / warfare are linked.

Some planets when added to your empire give you additional abilities. Some enable you to produce specific goods. Some give you a role icon, boosting your role action in future.

When the game ends, you score points for planets and techs. These are added to whatever you have scored from trading.

You grow your empire. As you expand you get more powerful. You can afford better techs. Your deck grows too, possibly becoming more specialised. You can do more and more. Your decisions build your empire and augments your deck at the same time. Every role decision has a long-term implication. In the game we played, I did not bother with thinning my deck. My deck grew a little unfocused. I did plan to focus on producing and trading. I was the only one who went into this area. However I probably didn’t focus on it well enough. I wasn’t very efficient. I slowed the growth of my empire too soon. In the later game I fell behind, and I was left at an obvious disadvantage. I should have grown my empire more before switching to do heavy producing and trading.
Picking a role is sometimes quite a dilemma. If I keep picking the same role, I may exhaust the common stack sooner than I’m ready for. If I’m still behind, bad idea. The tempo of the game was a constant concern a the back of my mind.
Han was the only guy doing warfare, so he didn’t have to worry too much about the warfare role stack running out too quickly. 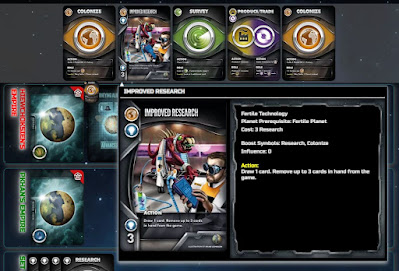 These are the details of a tech card. Notice the two role icons at the top left of the card. 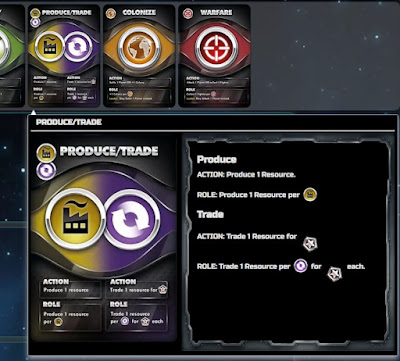 Details of a role card. 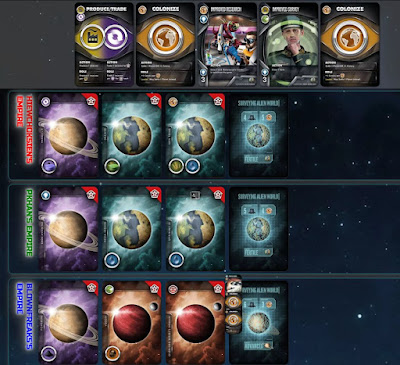 At this point all three of us had three planets, and we had also found a fourth planet to colonise or conquer. 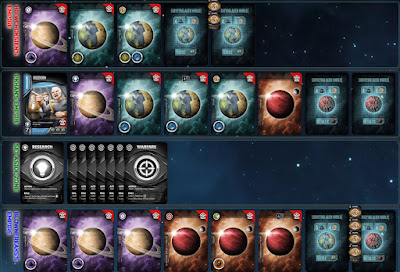 I was red (first row). Later in the game I fell far behind in the number of planets. By this time Allen and Han both had six planets and I was still stuck with just three. 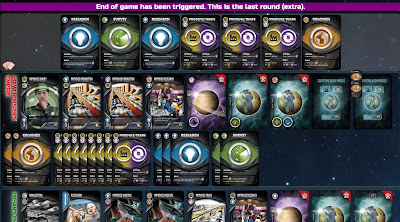 When the game ends you can see all the cards in your deck and all your planets.
In Eminent Domain you need to think about not just the deck building but also your hand management. Whatever you happen to draw presents a tactical problem. How are you going to fully utilise your hand? I find deciding whether to discard cards quite a dilemma. Do you keep them so that they will combo well with whatever you draw next? Do you discard them all and give yourself better chances of drawing more useful cards? How your opponents have built their decks and their strategies need to be considered too.
The Thoughts
Eminent Domain is a game with deck-building and role selection. The individual components sound familiar, but when put together, the whole package becomes something different. I am familiar with the many games which have similar mechanisms, but when playing Eminent Domain I felt I had to learn a new game from scratch. It felt fresh and alien. I had to experiment and feel around for the balance. It was a new challenge. I tried to mimic the produce and consume strategy in Race for the Galaxy, but I got the timing wrong and that messed up my game.
Eminent Domain is more than 10 years old. I have heard of it before. How it had been described sounded familiar to me. I had played many other similar games. I never really felt the urge to try it. Now I am glad I gave it a go. It turned out to be a much more interesting experience than expected. It’s available at BoardGameArena.com so giving it a go is convenient.