The joy of light games

I recently organised a game night for my BNI community of friends, and these were the games I brought. It was a mix of light and medium complexity games. I had played with a few of the friends in this community previously, and they seemed to want a bigger challenge, thus the medium complexity games. I also brought a few of my game prototypes. Most of the attendees were new to boardgames, so this was an introduction to the world of boardgames for them. They mostly came for spending time together and not all were specifically interested in boardgames.  In the end, we didn’t play any of the medium weight games. We stuck to the light games all evening. We had great fun and lots of laughter, and this wonderful experience made me appreciate the beauty of light games. I told my friends I hadn’t laughed this hard for a long time. Originally I didn’t intend to play. We had about 15 people, so I had expected to be just teaching different groups to play while I watched and stayed on standby for rule clarifications. However they asked me to join, so I did play a couple of games.

I started with Category 5 (a.k.a. 6 Nimmt), before we had dinner. This is a classic from Wolfgang Kramer. It works for up to 10 players so this is very good for big groups.

Heng (middle) is a gamer friend and since he was there, he helped in teaching some of the games. That helped tremendously. Otherwise some of the groups would be waiting for me while I taught other groups. They played Pickomino, a dice game by Reiner Knizia about taking risks and eating worms. No kidding. 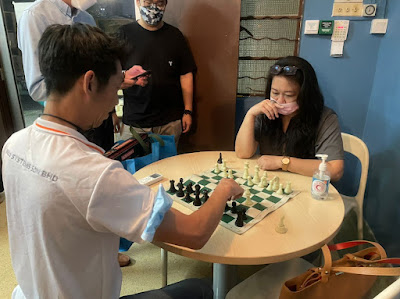 Janette (right) is an avid chess player and brought her chess set. They looked rather serious. Well, this was one game I didn’t need to teach.

We played Werewolf. I don’t have a copy. Yik Weng brought his copy. I only know the basic version of Werewolf so I taught them that. The werewolves were Danny, Tommy and John. The young lady in school uniform is Danny’s daughter, and she happened to sit between Tommy and Danny. One funny moment in the game was Danny’s daughter singling him out. She said to the room she was sure her father was a werewolf, because when he was nervous he would stutter. She caught him stuttering. Danny was not able to weasel out of this.
Another funny moment was when she voice her suspicion that Tommy was a werewolf. Her explanation was that when she spoke to bad guys, she had an urge to cry; and when she was speaking to Tommy just a moment ago, she had that urge. Tommy is normally quick-witted and eloquent. He was caught off guard by this reasoning and didn’t know how to respond. He turned red, and when Vivian pointed that out, he became even redder. The room roared with laughter. Being a werewolf is not easy! Surprisingly during that day phase the villagers did not pick Tommy to be lynched. Somehow the werewolves managed to divert attention to another innocent villager.

This was our dinner, prepared by Clifford. Classy! 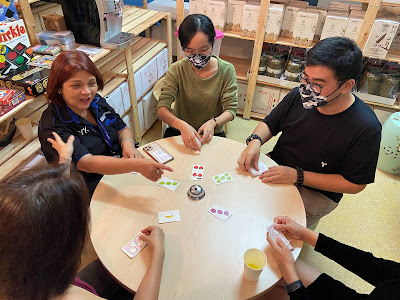 Dyan (centre) was the youngest at the Halli Galli table and completely slaughtered the rest. This is a game of speed and reflexes. She was undoubtedly the quickest. 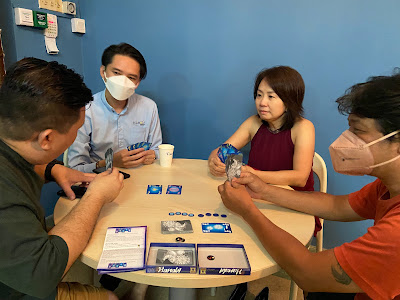 Hanabi is a cooperative card game with communication restrictions. You can’t see your own cards, but you see everyone else’s cards. Angela (3rd from left) was not familiar with games and struggled with grasping some of the concepts. This led to some funny moments. In Hanabi you give clues to your teammates to help them play or discard the right cards. There is an action cost to it so you have to give clues efficiently. As you play, you will develop some conventions and mutual understandings. If you tell your teammate a certain card is a 4, and on the table only green has progressed to 3, he would know that 4 which he cannot see is likely a green 4. He wouldn’t need another player to tell him it’s green. There was one moment during the game when we quietly worked out something like this in our minds. I knew a certain 3 in my hand was blue, through a few steps of reasoning. When Angela’s turn came, she solemnly pointed at that card and said to me, this card is blue. That was when Tommy and Clifford started laughing. We felt bad for doing that. Angela chided us for teasing her and we totally deserved that. 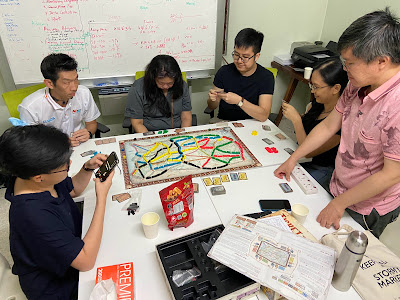 Many enjoyed Ticket to Ride. It was good to have Heng there. He helped to teach some of the games. Janette won this one. Next time I’ll probably bring Ticket to Ride: Europe. Ticket to Ride is almost a guaranteed hit with newbies. It amazes me. 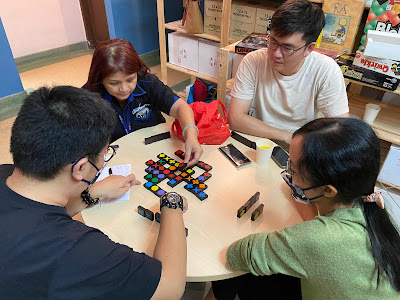 I brought Qwirkle because it was like Scrabble. So it would be easy to learn. Seet Han had played this before so they only needed minimal help from me. 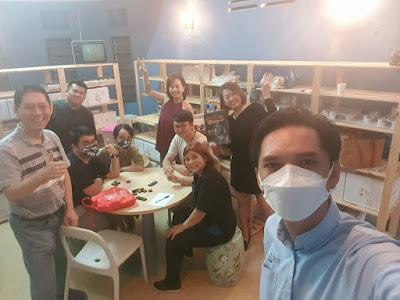 We should do this more. It is a joy to spread the fun of boardgames to friends who are new to them. The beauty of light weight games is everyone gets to participate competently and confidently, and the time spent is on actually playing the games, gaming the people and bonding with friends, as opposed to struggling with learning rules. Simple rules are a joy.
I didn’t bring out any of my own prototypes. I wanted to give them a more proper experience with real published games and professional art work. Art and components are part of the playing experience. However I am hopeful in future sessions with this group of friends I will be able to get my prototypes playtested, because most of them are light games.
In Malaysia the COVID-19 restrictions have only been lifted recently. Well, most of them anyway. Getting back to having a bit more face-to-face boardgame sessions feels great. 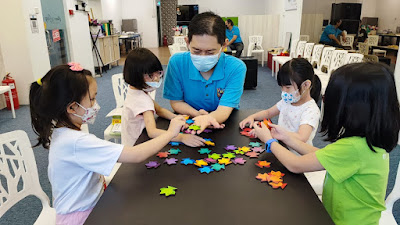 I continue to teach the HABA Learning Program. My group of kids is lively and energetic. It is like going back in time to when my own daughters were at that age. That’s more than 10 years ago. If you are interested in this learning programme for children, whether you are a parent, a teacher or an education business, reach out to us at Play With Purpose.