Hands in the Sea 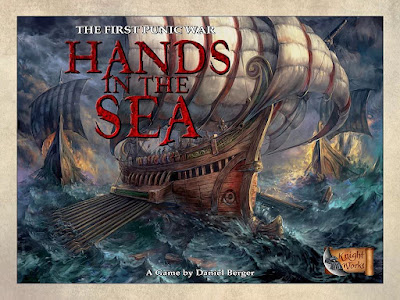 The Game
Hands in the Sea is a 2016 game. I have heard of it for some time, but only managed to give it a go recently. It is described as A Few Acres of Snow transported to the First Punic War. Now that I have played it, this is indeed apt. The core engine is exactly the same. The map is completely different. There are many elements unique to this different era and theatre of war. This is a wargame with deck-building as its core. One player plays Rome and the other plays Carthage. They fight for supremacy in the Mediterranean Sea. 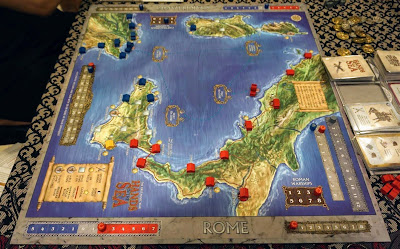 The map covers the Italian peninsula, part of the north African coast, Sicily and Sardinia. The Romans are red, and the Carthaginians blue. The seas are divided into just four zones, corresponding to the four main land areas. The game is played over at most 12 rounds. The definition of a round is a little different here. It is more than just every player having taken a turn. Here, a round is complete only when Carthage exhausts their draw deck. At the end of a round you do some scoring and you make money. Both players will certain play more than one turn within a round. As they buy more cards into their decks, a round will take more turns. It also depends on how quickly Carthage plays their cards. 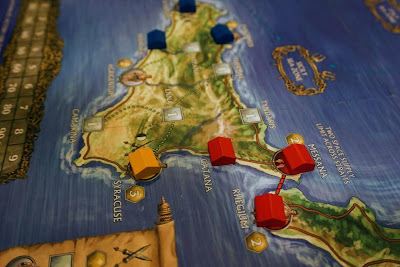 That yellow town is Syracuse. It starts the game as an independent town, but it’s right next to the Roman Empire, which means it will normally fall into Roman hands shortly. The island of Sicily is a major battle front between Rome and Carthage. 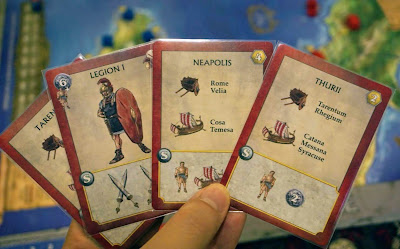 The core game mechanism is deck-building. Both players have their own decks of cards. The default hand size is 5. On your turn you perform 2 actions.  Some actions require playing cards. At the end of your turn, you draw up to your hand limit. You do not discard your hand before drawing. This is one difference from typical deck-building games. You need to spend actions to discard or permanently remove cards from your hand. If there’s a weak or useless card in your hand, it will be stuck there until you spend actions to get rid of it or you find some way to use it.
The two cards on the right are location cards. They list neighbouring locations that can be reached by road or by sea, i.e. locations you can attack or settle. For example when you have the Neapolis card in hand, it means you can attack or settle Rome by land, or you can attack or settle Cosa by sea. You need specific location cards to expand your empire. Cards of locations at your borders will be used for expanding, but cards of locations deeper inside your empire won’t be useful for this. However they still provide abilities, shown as icons at the bottom. E.g. the Thurii card can be used to settle a new location or to earn $2. As your empire grows, you will get more location cards, bloating your deck. This can be inconvenient and make your deck less efficient. You may have many cards that are less useful, or downright useless. 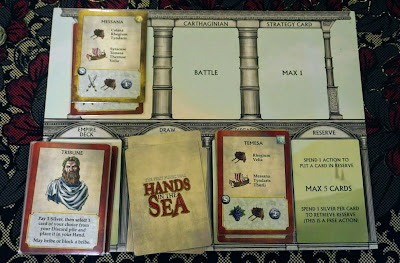 This is the player board, mainly used for organising your cards, not so much for gameplay. At the bottom left you have your empire-specific cards which only you can buy and add to your deck. Your opponent has his own set of empire-specific cards. These cards give character to the two empires. Some cards are available to both players. They are placed at the common board. 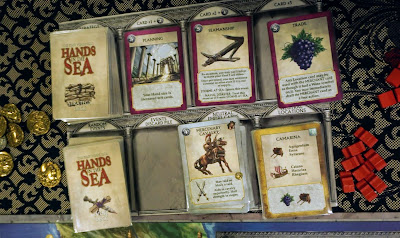 This is the common board. The two stacks at the bottom right are cards which can be bought or claimed by either player. The top row are the strategy cards. Three are always available for purchase. They get cycled periodically. You may own only one strategy card at any one time. Strategy cards give you a unique advantage.
The deck at the bottom left is the event deck. Before starting a new round, you draw a card and resolve it. Usually the event affects one of the players. You roll a die to determine who is affected. 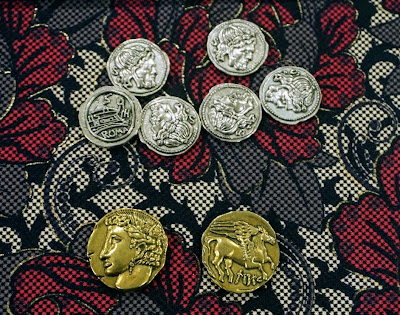 The coins are pretty! 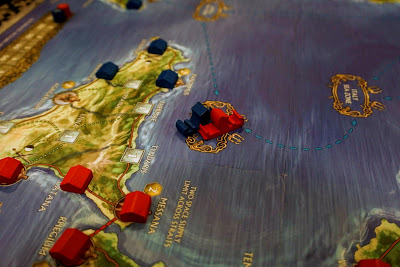 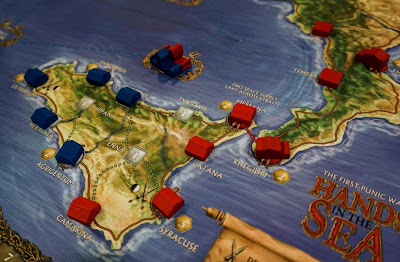 Sicily was our main hot spot. Our navies congregated here too. My navy was later destroyed by Allen. However he didn’t press his advantage at sea to pillage my coastal locations. He was too busy preparing to fight in land battles. So I never bothered to rebuild my navy. 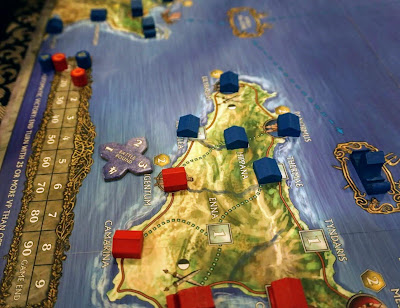 When you attack a location, you place a marker like this, with a number pointing at the target location. The blue marker means Carthage is attacking this time. The number indicates how many more turns the battle will last. Normal battles last at most 4 turns. Sieges, i.e. battles at locations with fortification, last up to 6 turns. 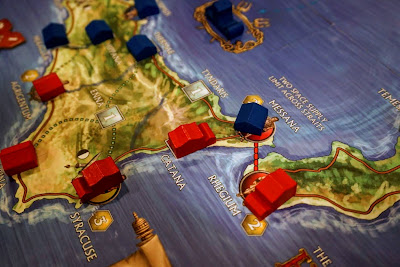 The Roman town Messana was successfully raided by Carthage. Allen even managed to settle Messana. If you lose any starting location to your opponent, your opponent will score points at game end. Thankfully I managed to raid Allen’s town at Messana later, denying him valuable points. 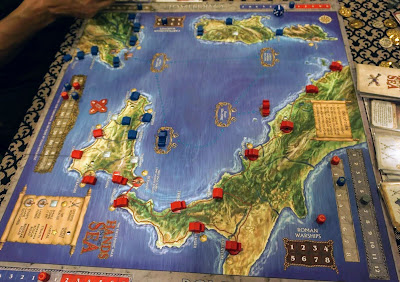 Allen (blue) managed to settle three locations in Sardinia (top right), and that gave him points. 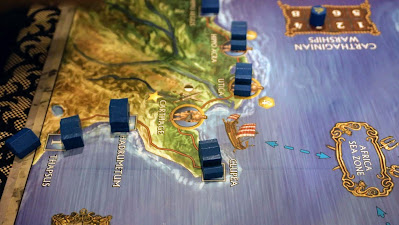 North Africa never had any battle and was never threatened by pillaging from the sea. Carthage had a stronger navy. 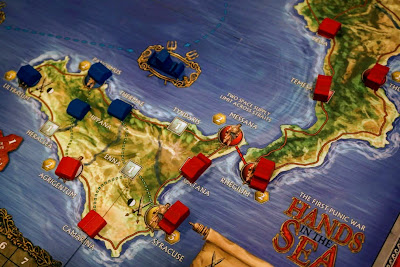 When the game ended, Allen and I controlled the same number of locations in Sicily. We were still pretty equal. Despite a few more victories, I was still far from dominating Sicily.
The Thoughts
I remember when I played A Few Acres of Snow, I really liked how the deck-building mechanism represented the difficulty of managing a distant colonial war. You may set a directive or strategy by purchasing certain cards, but they only go to your discard pile, and you will only draw them after the next reshuffle. Also you don’t have precise control over when you will draw which cards. There are delays and incoherence you have to deal with. Hands in the Sea is no longer about a colonial war between the British and the French. However I find the deck-building mechanism still relevant in an ancient age war where communication and transportation are real challenges.
Since the two games are very similar, if you have played one do you need to play the other? I would say they are still rather different experiences, despite the identical core engine. The maps are completely different. The characters of the combatants are different too. Unless you don’t like the core mechanism at all, playing the other game will be an enjoyable experience.
Although the main battleground will be Sicily, I think the two empires can pursue several different general strategies. You have some freedom to explore what combination of cards to buy and build your abilities on. There are different strategy cards to experiment with. Your choices in building your deck can create both strengths and weaknesses (e.g. the deck being bloated and the risk of bribery). You must also react to your opponent’s strategy. I find there is ample strategy space and variations.