By Hiew Chok Sien on August 6, 2022 • ( Leave a comment )
The work on publishing Dancing Queen is moving along. I should start doing a bit more marketing like releasing information and sharing updates of the project. I still plan to have the game released in November 2022. There’s still a lot of work to be done.

Previously I had decided to go with the Japanese manga (comic) style art. It was the most popular choice by far in a survey I did. Some commenters suggested to have more dancing in the art work. This was supposed to be a game about dancing, but the two main characters didn’t even seem to be dancing. That made sense.

This is the current version, with some adjustments made. There is a bit more feeling of motion. Also I have picked the light background. 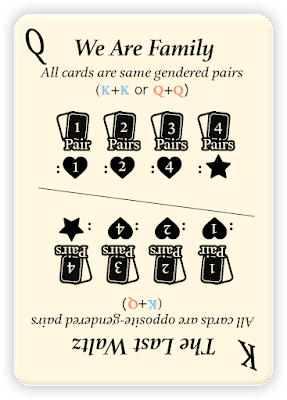 It took some effort to design the card fronts. It was challenging to come up with a way to communicate the 18 different powers on the cards. Previously I mostly tried to communicate using symbols. My artist now suggests having the text explain the power clearly, and then use symbols just to list the point values. This image above is our current card power notation. The image below is the previous version of the same card. 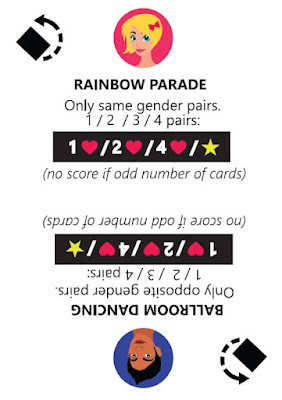 I am changing all the card names to song names. I am standardising this. Previously my card names were a mess of different things. I am not used to the new names yet. When I think of a card power, the old name is still what comes to mind first. It’ll take me some time to relearn this. 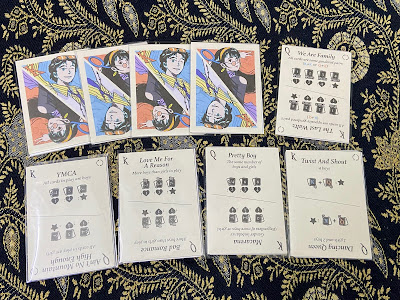 The artwork is not all done yet, and what we have so far isn’t finalised, but I couldn’t wait to create a new playtest copy of the game. I wanted to get a feel of how the game will be using this new art style and notation. I wanted to start testing this. I had goosebumps seeing this art concept transform into something physical. I felt like a pregnant mum when the baby’s kicking. 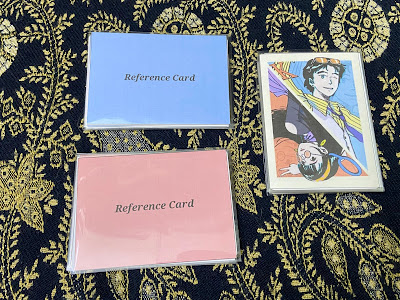 One important reason I made this playtest copy was I wanted to try how the game feels after being converted into a pure card game. The previous version of the game has two reference sheets, each the size of half an A4 sheet. I can’t squeeze all that information into a single card, so I’m splitting it up into four cards. Not ideal, but it’s a compromise I have to make for the sake of portability. I want the whole game to fit inside one small deck.
The 7 trophies and the microphone used to be yellow and black cubes respectively. I’m converting them all to cards as well. Dancing Queen, the 9 card game, will become a deck of 25 cards. 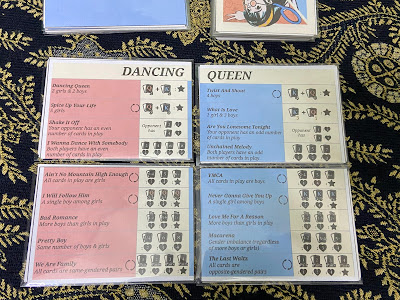 Four cards will make a complete reference table, like this. This was created by me, not by my artist. It will look better when done by a professional artist. I just wanted to test this format out early and get some feedback early. 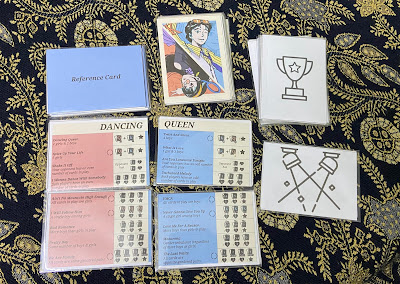 We don’t have the art for the trophies and the microphone yet, so I downloaded some clipart from the internet to be used as placeholders. We earlier decided to change the microphone to a spotlight. Now we will likely change the spotlight to a disco ball. That should fit the theme even better. Julian said the spotlight would end up like floorlights, depending on where you sit. 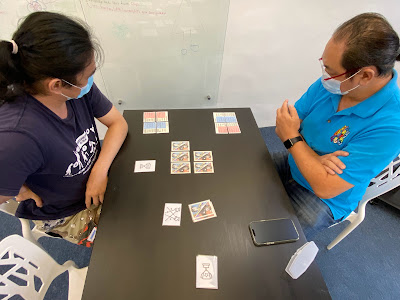 I have started asking friends to test this version for me. It was exciting for me to see this being played at the table. Once Dith and Julian started playing, they found a few issues. Thankfully these were just text and notation errors, and not game mechanism problems. The core game mechanisms have not changed from the previous version which won the contest. Only art, names and how the rules are explained have been modified. One potential problem is the text might be too small and hard to read. I wonder whether this will be a major issue, or this is just an old people problem for me and friends of my age. We needed reading glasses when playing the game. 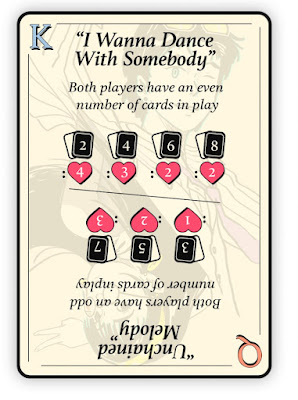 We are still adjusting the card front. This is another version with a bit more colour. Do you like this one better?