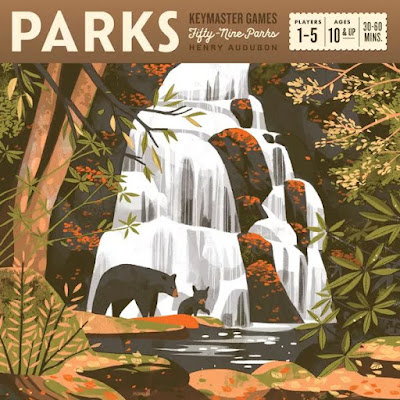 PARKS is a recent and popular game. I saw it available at the Board Games Together public gaming event at Chinatown (Petaling Street), and asked the organiser to teach me to play. 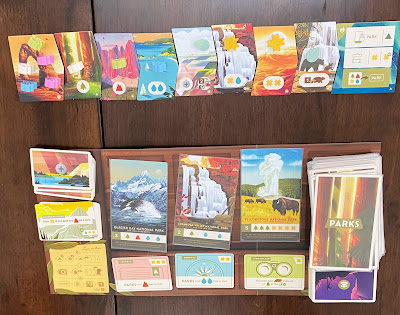 The theme is the many national parks in the USA. The core mechanism is based on this track at the top built from multiple tiles. When a round starts, every player has two hikers at one end of the track. On your turn, you must advance one of your hikers to a new tile. You can walk as far as you want, and normally you will land on a vacant tile. The tile you land on gives you some benefit, usually in the form of resources. Some allow you to take specific actions. When both hikers of all players reach the end of the track, the round ends. You play four rounds. Every new round a tile is added and all tiles are shuffled to make a new track. This keeps things varied and you will have to adjust your tactics accordingly. 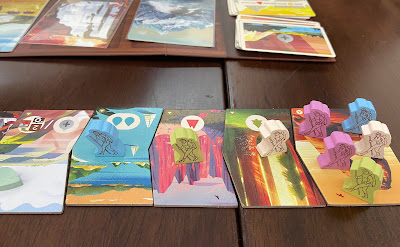 The icons on the tiles indicate what you gain when landing on them. In most cases you collect resources. You can exchange specific combinations of resources for park cards, and park cards are worth points. This is your main source of victory points. Cashing in resources for park cards is an action which some tiles allow you to perform. You can’t do this any time you want. You need to land on a specific tile to do this. The final tile always allows you to do this, so every round you have at least two opportunities because you have two hikers. 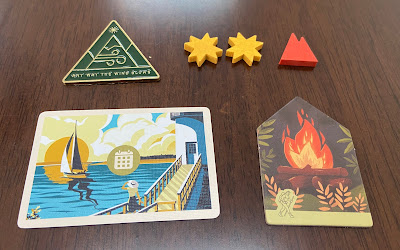 The campfire allows your hiker to land on a tile which has other hikers. You only get to use your campfire once per round, use it wisely. Once it is used, you douse it, i.e. flip it to the other side. You reset it at the start of the next round. 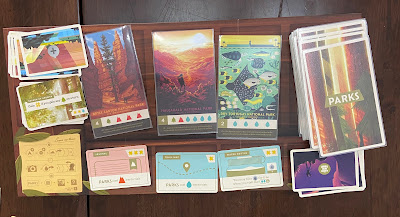 The largest cards in the middle are the parks. You can see what resources they require and how many points they give. Whenever a park is claimed, a new one is drawn to replace it. All the other cards you see here have different functions. The canteen (bottle) is an equipment which allows you to convert water to another resource type. There are powers you can buy which give you permanent abilities. There are also cards which introduce special rules for each round, e.g. giving extra resources when you collect a particular resource type.

When setting up a round, every tile on the track gets seeded with one resource. Whoever is first to land on the tile claims the resource on it. The end tile offers three different actions. Whoever uses these actions early gets a discount. Both of these encourage players to go fast. However, in general there is incentive to go slow. Going slow means your hikers are stopping at more tiles to claim more benefits. These add up. Hikers who are quick to reach the end do nothing and just wait. The only exception is the last hiker still moving. This hiker is no longer allowed to move step by step and must immediately go to the end tile. When there are two hikers remaining, they can collaborate and both take their sweet time moving one step at a time, collecting tons of resources as they go. 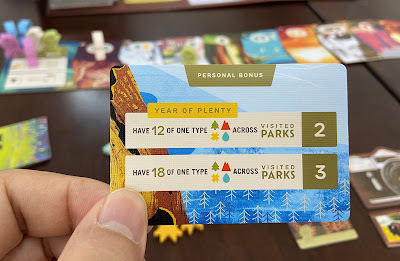 This is a secret objective you draw at the start of the game. If you can achieve it, you earn a bonus. This particular one I drew gave me points if I managed to collect enough parks to have 12 or 18 of the same icon. I chose to go for parks needing water. I managed to get myself a permanent power of discount by 2 water whenever I claimed a park. This helped tremendously. 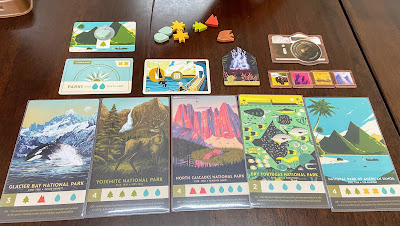 These were some of the parks I claimed. They all needed water. At the top right there’s a camera. This is another way of scoring points. Players need to fight over this camera because there’s only one in the game. When you perform the photo action, you first claim the camera if it doesn’t belong to you yet. You may then pay two resources for a photo, which is worth 1pt. If you already own the camera when performing the photo action, you take a photo for just one resource. 1pt doesn’t sound like much, but if you do this regularly it is lucrative. 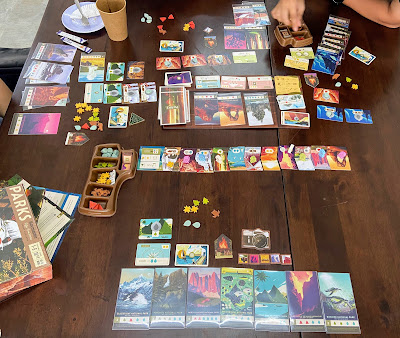 The game is colourful and eye-catching.
The Play
PARKS reminds me of Tokaido. It has that vibe of taking your time to enjoy the scenery. That “it’s the journey not the destination” feeling. The central mechanisms are different. In PARKS the turn order is fixed compared to Tokaido where it is always the player who is behind who takes the next turn. However in both games there is that same incentive to go slow. Slow is more. You are pressured to go fast only when there is a specific spot you want desperately.
There is significant player interaction, almost like a worker placement game, because you usually can’t enter a tile occupied by someone else. You pay attention to what your opponents are collecting, because if they are going for the same parks, you need to race them. You try to deny your opponents the use of their special abilities. If an opponent has many canteens, you know he will want to visit tiles that provide water. You would want to occupy those tiles to foil his plans.
There is no direct attacking between players. The competition here is of the Chinese dinner type. The food is all at the centre of the table. It’s all about being faster to grab that chicken drumstick which most people want. This is an open information game, so there can be analysis paralysis if you play with friends with a bit of such tendency. The only secret information is the objective card drawn at the beginning. This doesn’t seem to have a big impact though.
The Thoughts
PARKS is a resource collection and conversion game. For me personally, it is a rather typical Eurogame, i.e. been there, done that. There’s nothing particularly wrong with it, just that there’s nothing truly new and exciting for me. But this is my problem. I think this game will bring joy to many other people, despite being just okay for me. It’s a mid-weight strategy game. There’s decent player interaction. The art is lovely. The components are excellent. It’s a well-crafted play experience. I will use pop songs as an analogy. For me, of course pop songs from 20 years ago are superior to those today.  Pffttt. Those are songs from my time. The youth of this day and age will like the current pop songs. The songs from my era would be called classics, or simply old songs. Outdated songs. If I try to objectively compare PARKS with mid-weight Eurogames from 20 years ago, I might reluctantly admit that PARKS is better, because today the boardgame industry has higher standards for artwork and game components.