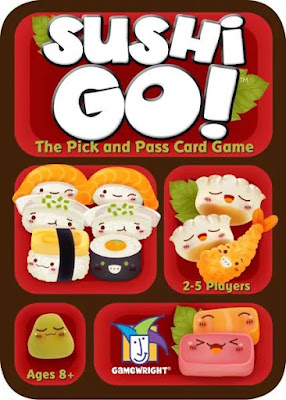 Normally I wouldn’t be planning to play Sushi Go, because I’ve played Kuih Muih, and I know they are very similar. I just happened on a chance to try it, so I thought why not. 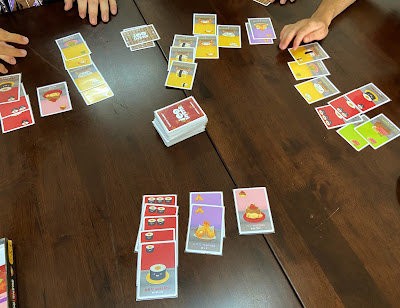 In summary, Sushi Go is 7 Wonders simplified. You play 3 rounds. Every round everyone starts with 7 to 10 cards (depending on the number of players). You pick a card from your hand, and pass the rest of the cards to the player next to you. Everyone does the same, all at the same time. You then play the card you have just picked. Everyone knows what cards everyone else is collecting. Repeat this pick-then-pass process until all cards have been claimed, and the round ends. You do scoring. The different types of cards score in different ways. E.g. you must have the most or second most of maki rolls to score. You need to have a pair of tempura to score. Once scoring is done, you’ll discard most of your cards. Only a few types of cards are kept for end game scoring. Rounds 2 and 3 work the same way, and then the game ends.
The game plays fast! There are no turns. Everyone is doing the picking and passing at the same time. Usually you’ll only pay attention to the player next to you, because you want to avoid passing to him cards which help him. It’s not always easy to avoid that. There will be cards you want to collect, and it’s not always worthwhile to forgo a card you want in order to take a card your neighbour wants. 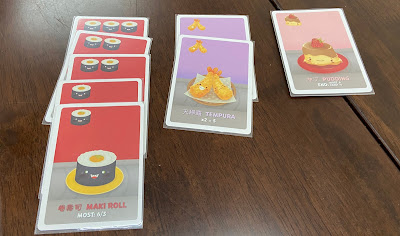 Compared to 7 Wonders this is definitely easier to learn so this works better with new players and non-gamers. It does look very similar to Kuih Muih, but the core mechanism is a little different, resulting in a slightly different play experience. Compared to Sushi Go, Sushi Go Party comes with more cards, more than what you need to play a game. When you set up a game, you only choose a subset of card types. That means you can play a number of variants, depending on the card type combination. 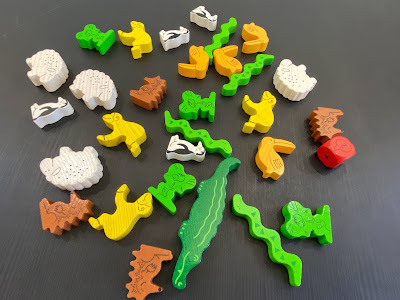 I first played Animal Upon Animal quite some years ago. I am playing it again in recent years because of the children learning programme I’m involved in. This is a game which works for both children and adults. I used it in a recent training session I conducted (for adults), and it is equally exciting, if not more so, when the players are all adults. This is a dexterity game where you need to stack up the animals and avoid causing the whole structure to collapse.

In July I organised another boardgame gathering for my BNI friends. They are mostly non-gamers, so I generally picked light-weight games. What do you think of this selection? 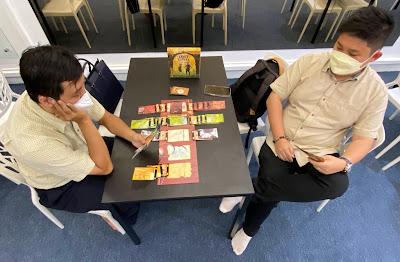 Lost Cities is a classic and a good filler when waiting for others to arrive. It was well received. 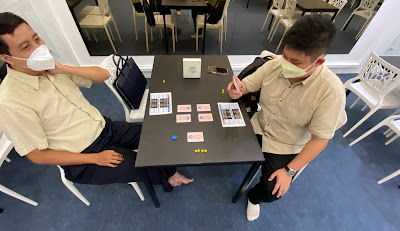 I took the opportunity to get my friends to try my upcoming game Dancing Queen. I wanted to see whether it works for non-gamers. I didn’t get much response, so maybe this isn’t really something for non-gamers. 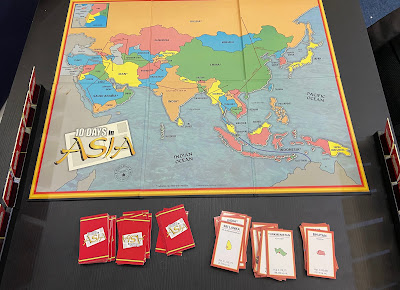 Another game which was popular was 10 Days in Asia. Alex immediately asked me where he could buy this. Unfortunately it is now out-of-print. 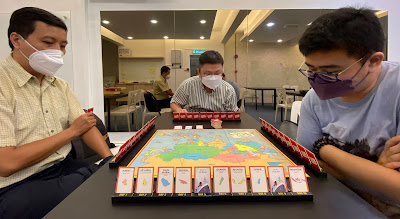 I like describing this as mahjong. There are elements I call “self draw” and “waiting for a single tile”, which are terms used in mahjong. The game isn’t really like mahjong. I make it feel like mahjong so that new players are more comfortable with it. 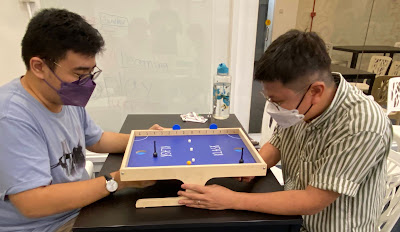 KLASK is easy to learn and engaging. This particular set was not very well balanced. We had to put a folded piece of paper under one of the legs to make it better balanced. 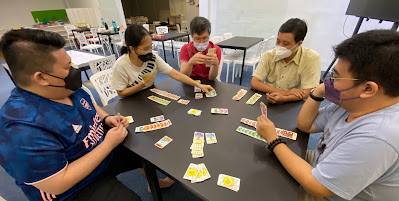 Bohnanza, or the bean game, is a classic from Uwe Rosenberg (Agricola, Le Havre, A Feast for Odin). He was famous for Bohnanza well before he was famous for Agricola. It was great fun bringing this game out again. It works well for new players. It has plenty of player interaction, because this is a negotiation game. The magic of Bohnanza is a sight to behold. This should be a hall of fame game. 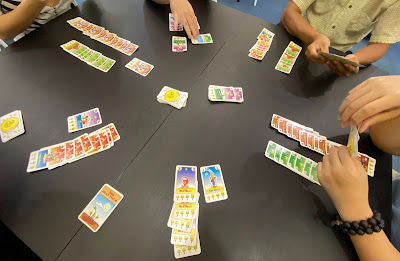 In my BNI community there is a phrase often used – Givers Gain. When we played Bohnanza we kept teasing one another – givers gain! You don’t really need this stink bean so you might as well donate it to me. I’ll be forever grateful! 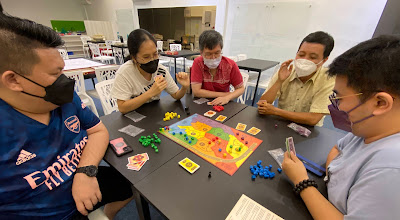 I taught the group China. This is a game I greatly admire. Unfortunately it didn’t pan out. I had thought this was a straight-forward game, but the group felt it was complicated. I guess the core rules are not complicated, but indeed there is some depth in the strategies. 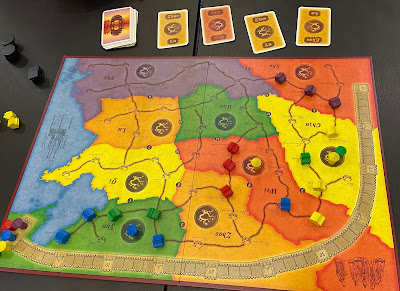 I probably should not have elaborated so much on the tactics. If I had simply stated the rules, the game might have gone better. When I enthusiastically explained the strategic considerations of this situation and that situation, I was confusing them more than educating them. They gave me blank looks and said, whatever you say, I’ll trust you. I should have let them explore the tactics at their own pace, even if they didn’t quite figure out all the intricacies. I had overwhelmed them with unnecessary information. 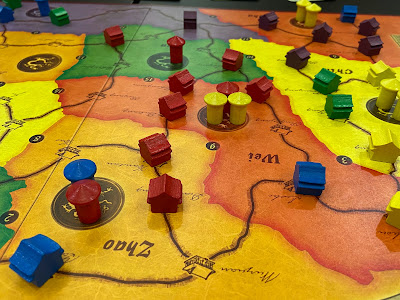 Red had created a chain of at least four connected houses, so he would score a bonus. 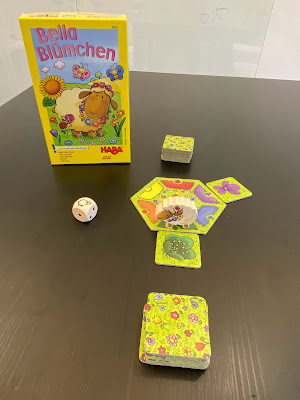 Bella Little Flower is a game for young children. I taught this at recent lesson. On your turn you roll a die to move Bella the sheep. If she lands at a spot with flowers, you collect all the flowers next to her. Your goal is to collect as many flowers as possible to make a necklace. At the end of your turn, you draw a flower tile, and add the flower to the spot matching the colour of the flower. For adults, this is barely a game. It certainly isn’t very interesting. However now that I’m running a learning programme for children, I’ve learnt to appreciate these children games and how they help kids learn. Many elements in a well-crafted children’s game create a learning experience for the children – the artwork, the game components, how the children need to count and move a game piece at the same time, and how they need to match the colours of two components. Adults take these for granted, but for children the experience of playing a game gives them much sensory input and thus triggers learning.