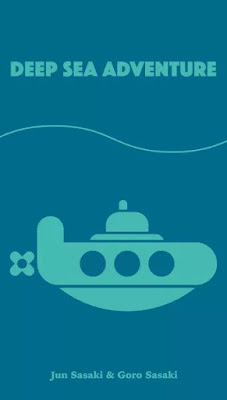 Deep Sea Adventure is a game from Japan. It is small and compact, not just in terms of components but also in terms of gameplay and rules. You are deep sea divers hunting treasures. During the game you will make three dives, each time trying to bring valuable treasures back to the submarine. The player who manages to collect treasures of the highest total value wins. 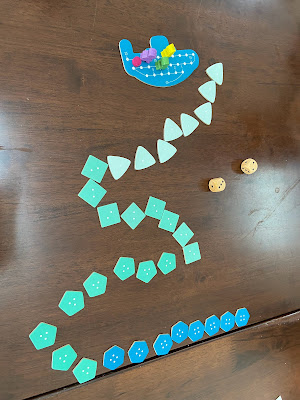 This is how the game is set up. You create a path using tiles in four different shapes. The tiles form your dive path and they are also the treasures. Their values are unknown initially, since they are face-down.  You only know the value range, and that the darker a tile is the higher the value range. You dive by rolling two dice. The die faces range from 1 to 3, so with two dice, you will roll between 2 and 6. 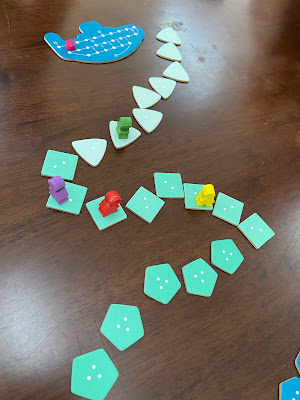 If you run into another player when moving, you skip over the space. This is convenient. You are using your opponents’ pieces to move further. When you land on a treasure tile, you may decide to pick it up. Once you pick it up, you are committed to bring it back to the submarine. You don’t own it yet though. It’s yours only if you manage to make it back to the sub before oxygen runs out.
Once you have a treasure in hand, two things change. Firstly, your movement slows. You deduct the number of treasures you carry from your die roll. The more you carry, the slower you become. Secondly, you start consuming oxygen. There’s an oxygen tank back at the sub which is shared by all players. At the start of your turn, you reduce the oxygen level by 1 for each treasure you carry. If everyone is carrying treasures, the oxygen depletes quickly. You need to make it back to the sub before the oxygen runs out. You don’t die if it runs out. This is not that kind of game. You’ll still make it back to the sub, but you must drop all the treasures you are carrying. They sink to the bottom of the sea. 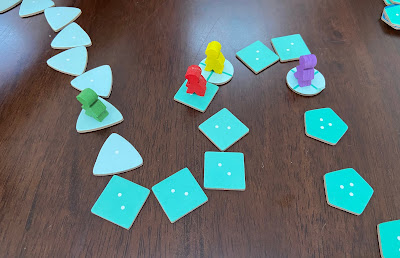 When you pick up a treasure tile, you replace it with a round token. This is just temporary. Within the same round, if someone else later lands on the round token, he can’t pick it up, because it isn’t a treasure. It just forms part of the path.
In the first half of a round, everyone dives downwards. Eventually every player will decide for himself that it’s time to change direction and head back to the sub. Once you turn back, you can only move up until the end of the round. 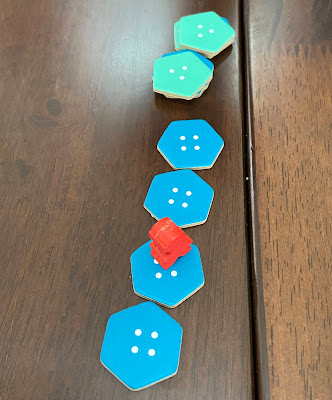 If anyone fails to bring his treasures back to the sub, they sink to the bottom of the sea, i.e. to the end of the path. These abandoned treasures are stacked into threes. In the second and third rounds, if you manage to reach any of these stacks, you can pick them up, and a stack is treated as a single treasure. That means it only slows you down and consume oxygen as if it is one treasure. However for scoring purposes you do count the points on all three tiles in a stack. This is a high risk and high reward element of the game.
The Play
Deep Sea Adventure is a push-your-luck game and also a group psychology game. It is a game of chicken. If everyone is bold (or greedy, depending how you put it), you can go pretty deep without starting to consume any oxygen. Once anyone picks up the first treasure, the dreaded countdown begins. When players start consuming oxygen, the usage can accelerate and the oxygen can deplete very quickly. I did a 4-player game. When each of us had just one treasure, I would be seeing the oxygen level drop by four before my turn came again. This was terrifying, especially when my movement was already slowed by carrying a treasure.
We all want to be greedy, because if you aren’t you won’t win. Yet the greedier you are, the bigger the risk. If you fail, you end up empty-handed. It’s all about risk assessment. Yet it is impossible to perfectly gauge the risk. It’s not just the luck of the die rolls. There’s also the psychology of your opponents. Your opponents’ decision affect you. When you are clumped together, everyone moves quickly because your pawns help one another. Also, the number of treasures your opponents carry affects oxygen consumption.
Die rolls are exciting because they can produce expected results, both good and bad. They create an urge to gamble. They sometimes make you more optimistic than you should be. Yet sometimes when you get lucky that feeling is wonderful.
There is no direct aggression, but you can intentionally sabotage your opponents. Let’s say one particular player is doing particularly well and it looks like he’s going to get back to the sub with a valuable treasure. The rest can try to force him to fail by taking more treasures. You can decide to sink and drag your opponent down with you. That shared oxygen tank mechanism is clever.
One possible situation is you get back to the sub with a lot more time to spare than expected. Once you are back, you no longer consume oxygen from the tank, and you are leaving more for your opponents who are still racing back. You might regret not having taken one more treasure. Aaah… it’s so tantalising to try to find that perfect balance of risk and reward. You want to go right up to the edge where the reward is the highest, but where that edge is is highly uncertain. 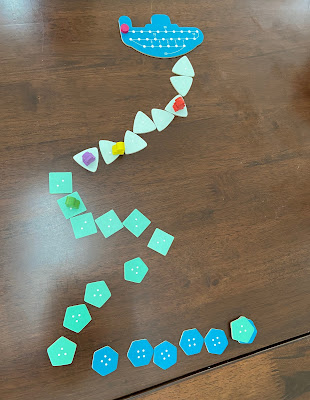 This was the second round in our game. A few of us failed in Round 1, thus the stack at the bottom of the sea. When a new round starts, round tokens (due to treasures having been picked up) are removed. This shortens the path and makes higher values treasures more easily accessible. This creates escalation in the game.
Since most of us got burnt in Round 1, we were all more conservative in Round 2. However one particular player went all out and dived all the way to the bottom. He claimed a stack of three tiles. The rest of us thought he was doomed, since we had all turned back and he had no one to leapfrog over as he headed back. However he made it back to the sub just in time. Those of us who made it back to the sub no longer consumed oxygen, and what was left in the tank was enough to get him home.
With one player leading by a mile at the start of Round 3, the rest of us knew it was all or nothing. We all gambled, and we all lost terribly. So the player who hit the jackpot in Round 2 won the game comfortably. Going against the flow might be a winning formula. Sometimes. 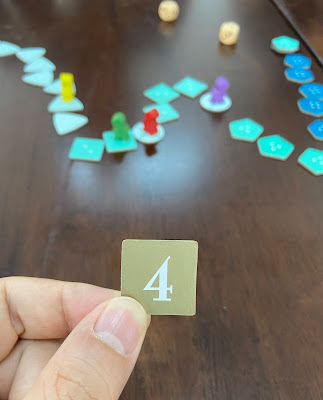 After all that toiling and all I got was this lousy 4pt treasure.

Deep Sea Adventure is a game with that particular Japanese style which I highly admire – concise and clever, both in terms of components and gameplay. This is the minimalistic school. It is almost a microgame. Play time is short so it works well as a filler. I have an uneasy relationship with this kind of game. On one hand I greatly admire them, and I want to make games like this myself. On the other hand, when I arrange game sessions with fellow seasoned gamers, we don’t plan our sessions around games like this. Our main event is almost always some heavy strategy game. I pick minimalistic games only when I plan sessions with non gamers or casual gamers. At these gatherings we play multiple games which are lighter and shorter.

Boardgames as a hobby for me is changing. In the past few years I have done more and more game design, and I am playing published games less. Up till now (August) in 2022 I have not yet bought a single new game. Five years ago this would have been unthinkable. I do still play new games, just that they are other people’s games. I have shifted from a pure consumer to a mix of creator and consumer. It has been fun and rewarding going into the game maker side of the hobby, and I guess that’s what’s important. Deep Sea Adventure is the kind of game I want to learn from. I think to make a commercially successful game in Malaysia it needs to be a light game with mass market appeal. It has to be accessible. So that’s where I’m focusing, even though my favourite games tend to be heavy Eurogames. I have thought about creating a heavy strategy game, and I have some ideas. However I have not actually started work on any such project. My many projects designing light games are already keeping me busy.