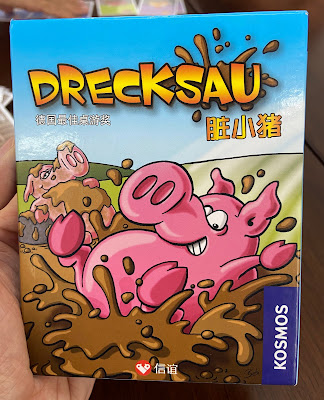 The Game
Dirty Pig is a 2012 game, and in that year it was a Spiel des Jahres-recommended game. This box cover above mentions the Spiel des Jahres, but this is a little misleading. It’s not an award winner, just one of the recommended games. Still, this is no small achievement, and having played the game, I certainly appreciate why it was commended. This is a light card game suitable for families and casual gamers. It has no text or even numbers. I think children as young as 5 can manage and enjoy it. 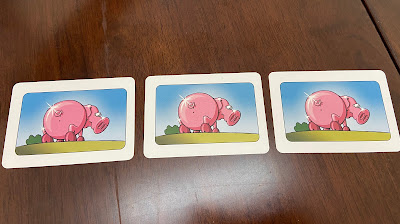 With 4 players, everyone starts the game with three squeaky clean pigs. The pig cards are double-sided, one side clean and the other side dirty. Your goal is to get all your pigs dirty. The first player to do so wins the game. 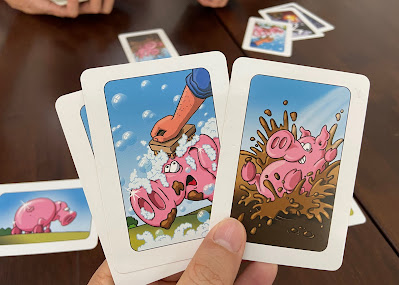 You have a hand of three cards. On your turn you play a card, then draw a card. The cards have various  powers, expressed solely in pictures. This card on the right – the mud pool – is how you dirty your pig. Play it and you can flip one of your pigs to the dirty side. The card on the left is the bath card. You get to clean another player’s dirty pig, flipping it back to the clean side. 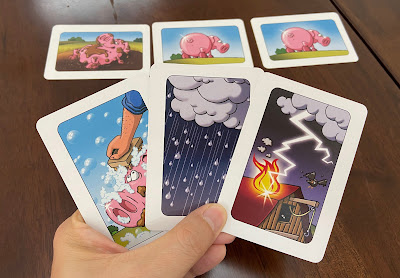 That card in the middle is the rain card. When it is played, all dirty pigs are washed clean by the rain. Well, except for those sheltered by barns. The barn is another card type. Play it above your pig to protect it from rain. However it doesn’t protect your pig from the bath card. The farmer can still walk in and wash your pig clean. Also a lightning card can destroy your barn, exposing your pig. 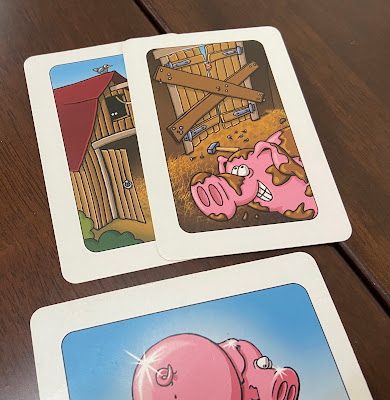 The planks card seals the barn door and stops the farmer from coming in to wash your pig. This further protects your pig. There’s a lightning arrester card which can be built atop your barn. If you have both the planks and the lightning arrester installed at your barn, your pig is 100% secured. However it is not easy to complete such a construction project. Your opponents will certainly try to sabotage your project while it is in progress. Also, all this work protects just one of your pigs.
The Play
Dirty Pig is a simple game. Every turn you just play a card and draw a card. The card powers are straight-forward. Player interaction is high. Many of the cards are attack cards. The more players you have, the more discussions you’ll have about who should be attacking who. You will likely be discussing who has which cards and negotiating who should be attacking which pig. There will likely be some cooperation, when there is a need to slow down the leading player. However this is an everyone-for-himself game, so no collaboration is lasting. If you can dirty your pigs quickly, why spend your turns cleaning other players’ pigs? Let other people do that while you focus on your goal. Let them do the hard work. This is one tricky element of the game. If you rely on others, or force others to stop another player, they may not have the right cards to do so, and you might end up letting the leading player win when you could have stopped him. Sometimes people may lie about what cards they have or do not have, to get out of contributing to the efforts to stop the leader. I know this is getting into the overthinking- and overcomplicating-a-simple-game territory (gamers tend to do this), but this is a fun part of the game. When nobody is willing to sacrifice his own turn to stop the leader, and everyone is hoping the leader doesn’t have a mud pool card yet, the result may be the leader cruising to an easy victory. I made use of this selfish crowd mentality in one of the games, and managed a quick victory. Aaah… the fun of exploring human nature, in such a simple game.
The Thoughts
You can call Dirty Pig a children’s game. It is simple. There is no deep or complex strategy. Player interaction is high. It is a rowdy game. The more players you have the better. The balance and competition among players will be more interesting. Luck evens out somewhat. The whole system becomes self-balancing when trailing players gang up on the leading player. This is an excellent boardgame cafe game, because it’s easy to learn. It’s a party game. Despite appearing to be shallow, the game allows some subtle tactics and psychological manipulation. That’s if you want to play like that. You can certainly play it in a relaxed and instinctive manner and still enjoy it.
Initially I worried whether the game would drag, since everyone would be trying to undo progress made by others. I wondered whether it would become an endless back-and-forth of some players advancing only to be quickly pulled back by the rest. However from the games I have played so far, this didn’t happen. Players still tend to prioritise getting their own pigs dirty. You don’t win by stopping others, you win by making progress yourself. Wow, that sounds like some life coach motivational quote.
Dirty Pig is a good icebreaker if you are making new friends. It’s the kind of game that encourages conversation. It certainly deserves the recommendation from the Spiel des Jahres jury.

Our first - and hopefully regular - WAR ROOM sessions for this 2023 kicked off last Sat with three tables of war mongering. One table did a 6-player JOHN COMPANY, arguably the best player count for this game, while we onboarded 6 new War Room 2E generals and tested their understanding with two tables of the North Africa scenario.
We appreciate the opportunity to host the AGM for TTGDMY last Sat. Plans discussed. Projects mooted. Strides made. Boardgamecafe.net wishes them all the best for 2023!
Generals, pls fall in. Playlist for today's War Room.
Excited to hear the Wehrle folks are thinking of doing a 2nd Edition of this under their own label. If they do the same job as they did with JOHN CO, I'll tell you this 2nd Ed is an insta-buy.
We are all set to welcome the TTGDMY folks for their 2023 AGM. Take flight, board game designers!