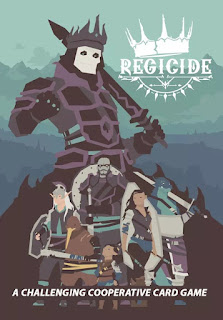 The Game
Regicide is a game that can be played with a standard deck of poker cards. It is a cooperative game. You are warriors working together to defeat twelve powerful enemies. These enemies are the Jacks, Queens and Kings in the deck. If any player is killed in battle, everyone loses. To win, you must defeat all twelve enemies. Whenever you defeat an enemy, it joins your ranks and helps you in fighting the remaining enemies.
When setting up the game, you shuffle the enemies to form a stack, with the Kings at the bottom, the Queens in the middle and the Jacks on top. You know you will fight them in this order, but you don’t know the exact order of the suits. To start playing, you reveal the first Jack. 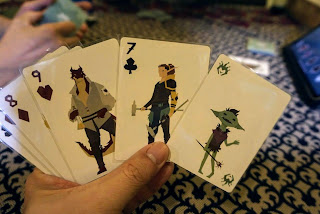 Every enemy has a health value and an attack value. Jacks have a health of 20 and an attack of 10. Queens are health 30, attack 15, and the powerful Kings are health 40, attack 20. On your turn, you play a card to attack the enemy, reducing its health. If its health is reduced to 0, it is defeated. As long as the enemy survives, it counter attacks, using its attack value. You have to discard cards from your hand to meet or exceed the attack value. If you fail to do so, you are defeated, and everyone loses. For example if the enemy’s attack value is 10, you must discard cards worth at least 10 points to block the counter attack.
The four suits mean something, and they are a most important aspect of Regicide. When you play hearts, you get to reshuffle some cards from your discard pile to the bottom of the draw deck. E.g. when playing a 9 of hearts, you will randomly move 9 cards from the discard pile to the draw deck. When you play diamonds, everyone gets to draw cards. E.g. play an 8 of diamonds, and everyone takes turns drawing cards until a total of 8 have been drawn or until everyone is at his hand limit. Cards are your resources. You use them both to attack and to defend. When you play clubs, your attack value is doubled. This is certainly helpful in quickly defeating an enemy. When you play spades, you reduce the enemy’s attack value. By doing this you reduce the number of cards you need to spend on defense.
The suits on the enemies mean something too. An active enemy of a particular suit temporarily cancels the power of that suit. For example when fighting a spade enemy, any spade cards played will not reduce its attack strength. That is certainly bad news. The enemy will always be counter attacking at full strength.
Whenever you defeat an enemy, it joins your ranks. It is placed in your discard pile, so the next time you move cards to your draw deck, the former foe will become a powerful weapon. Now if you are able to defeat an enemy with precision, i.e. you play a card with the exact value to reduce the enemy health to zero, you get a bonus. This enemy is placed on the top of your draw deck instead. This is great news. You will soon draw it and you can use it for the next enemy. Players are not allowed to discuss their cards, so this is not exactly easy to do this. 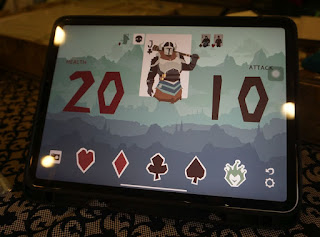 There is a Regicide app which you can download for free. You can use it to track the health level and attack strength of the enemies. It calculates card strengths and applies card powers for you. Not absolutely necessary, but it is handy. 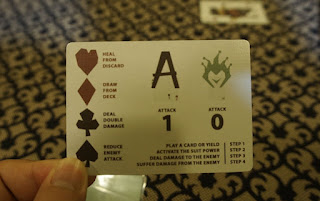 There are special rules for aces and jokers. This is not exactly a simple game. The strength value of an ace is just 1. However you can play an ace together with another card. You sum up the values, and apply the powers of the suits of both the cards, assuming they are of different suits. This can be very useful. Jokers have a value of 0, but they cancel the suit of the enemy. That means the enemy no longer disables the suit power. When you play a joker, you do not attack or suffer the counter attack. You also get to pick the next player. Jokers can be a lifesaver.
You can play multiple cards of the same value, as long as the total doesn’t exceed 10. That means this is limited to 2’s to 5’s. When you play multiple cards, you add up the numbers, and you apply the powers of all the suits.
The Play
I played 3-players. Han had taught Allen before. I was the only first-timer. When they played previously, they misinterpreted the spade power and made the game much harder than it was supposed to be. This time we played with the right rules. However we didn’t manage to beat the game. We only went as far as the kings. This is not an easy game to beat.
At first I thought the toughest enemies would be the spade enemies, because they would always attack at full strength. We couldn’t use spade cards to reduce their attack strength. They would severely deplete our cards during the defense stage. I later realised that enemies of other suits must not be taken lightly either. All aspects of the game presented challenges. In one of our games we lost due to not having any diamond cards in hand. No diamonds means no more card draws. That’s a death sentence. It’s only a matter of time to run out of cards. You have to remember to keep replenishing cards from the discard pile to the deck, and also to maintain the ability to draw cards. 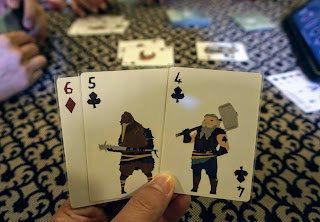 You are forbidden from discussing your cards. You aren’t even supposed to give hints. This is crucial. Without such rules the game may not work quite well. However there is a solo version of the game, so maybe the game does still provide a challenge even if you have perfect information. 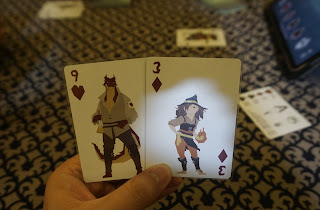 The Thoughts
This is a game which can be played with any regular deck of poker cards, but I think it’s fully worth buying a copy from the designers. Not just because of the pretty art. It is an excellent design. I greatly admire the game and find it better than most recent games I’ve played. It is creative and unique. Having been playing boardgames for many years, I sometimes despair because new games I play often feel similar. I often feel I’m seeing the same game over and over. Regicide is a game that gives me hope. There is still originality out there. There are still new ideas. There are still new worlds to explore. Being able to design such a wonderful game with just a standard deck of cards is no small feat. Two thumbs up!