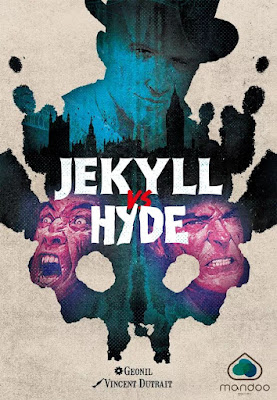 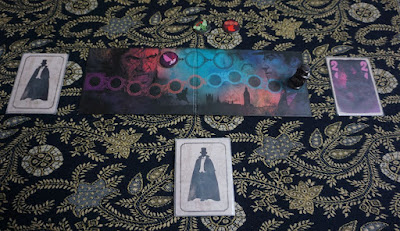 A game is played over three rounds. One player plays Dr Jekyll, and the other Mr Hyde. Mr Hyde is the second personality of Dr Jekyll who is trying to take over to become the dominant personality. Dr Jekyll, the original personality, wants to maintain control. The board is mainly a tracker to see how far Dr Jekyll has fallen. There are 10 steps on the track. If Mr Hyde can advance the pawn to the end of the track within 3 rounds, he wins and becomes the dominant personality. How far he advances at the end of a round depends on the difference in the number of tricks taken by the two players. The bigger the difference, the further the pawn moves. Mr Hyde wants to make sure one player wins many more tricks than the other, be it himself or his opponent. Dr Jekyll tries to keep things balanced, ideally each player winning 5 tricks.

There are 25 cards in the deck. There are 7 cards each in 3 suits – green, red and purple, and there are 4 potion cards. Every round each player is dealt 10 cards, so there will be 5 cards not known to the players. Before each of the three rounds starts, players must pass cards to each other, starting with just one in the first round, and eventually passing three in the third round. You will be revealing more and more information to your opponent.
In case you are not familiar with trick-taking – when playing a trick, every player must play a card. Whoever has played the strongest card claims all these cards just played – i.e. the trick. 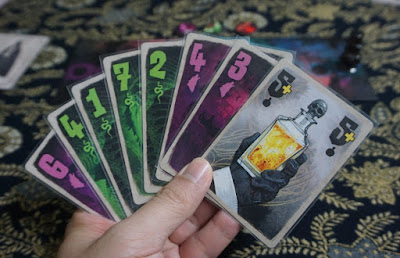 When one player starts the trick by playing a card, the opponent must play a card of the same suit if he has one. Only when he doesn’t have a card of that suit he may play any other card. If the cards played are of the same suit, the larger number wins the trick. If the suits are different, the stronger suit wins. Suit strength varies from round to round, and may even change in the middle of a round. The first suit being played in a round becomes the weakest suit. When a second suit is played for the first time, it becomes the second weakest suit. The suit which has not yet been played automatically becomes the strongest suit.
A potion card triggers the special ability of the suit of the other card played. When the purple power is triggered, the winning player claims an additional trick from his opponent. When green is triggered, the players exchange two cards. When red is triggered, the suit strengths are reset. All these powers can greatly affect the outcome of a round. 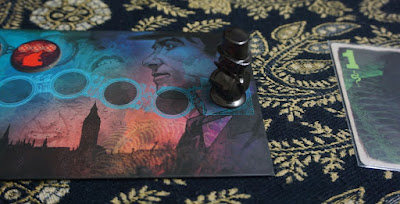 This pawn used for tracking Dr Jekyll’s fall from glory is beautiful – a bust with two faces. 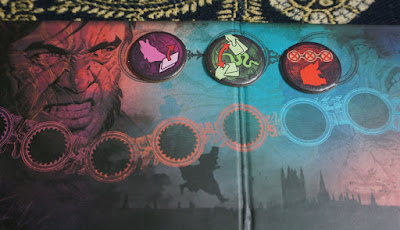 These round markers are used for keeping track of suit strengths.
For Mr Hyde to advance 10 times within three rounds, he more-or-less needs to have two rounds of 7:3 and one round of 6:4. The trick difference would be 4 + 4 + 2 = 10.
The Play
This little game gives you a decent mental exercise. If you play Mr Hyde, one difficult decision is who do you want to position to be taking more tricks. When I started playing, I instinctively thought that it would be easier to play Mr Hyde, because I just needed to make things go out of whack. I didn’t need to maintain such a strict balance. The more I played, the more I realised it wasn’t that simple.
The information glimpsed before the start of a round can be crucial. You use this to guess your opponent’s hand and his intentions. The potions are crazy powerful. You must defend against them, and you must use them wisely.
That basic tactic in trick-taking games – getting rid of one suit as soon as possible – still holds true here. This is important because you will have freedom to play what you want.
I get a feeling that I have more control in a 2-player trick-taking game compared to a 4-player one. Because of that the game feels more strategic. However I am not really an expert in this genre. For the pros, a 4-player game is probably just as strategic as a 2-player game, because they understand trick-taking deeply and can read their opponents well. I am nowhere near that level yet. 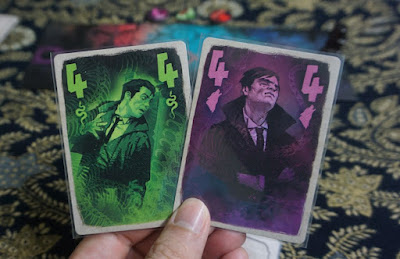 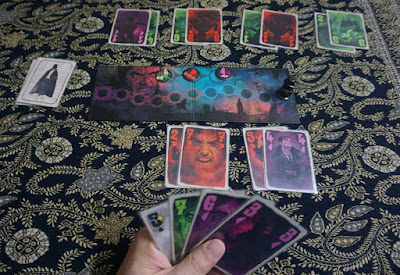 We arranged the tricks we won this way, so that it was easier to keep track and count.

When the pawn enters the red zone, the Hyde player becomes the start player for the new round.

Now that I have played Jekyll vs Hyde, I must say 2-player trick-taking games do work. If you are into trick-taking games, this is worth checking out. It is quick, clever and strategic. It is a game in which you can orchestrate killer moves by reading your opponent and planning ahead well. Since this is a 2-player game, it can also serve as a filler on game nights when you are waiting for everyone to turn up.