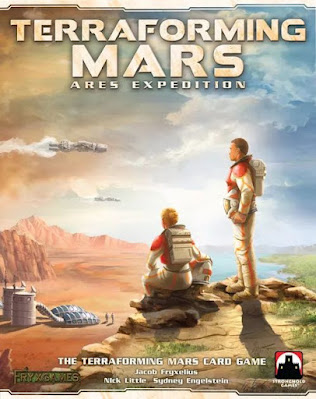 The Game
Ares Expedition is the card game version of Terraforming Mars, and this is a statement you can take literally. It is basically Terraforming Mars with the board play removed. You are mega corporations participating in the Mars terraforming project. You need to create oceans, raise the temperature and increase the oxygen level. When you have done all three sufficiently, the project completes and the game ends. Whoever has scored the most points wins the game.
Like its predecessor, Ares Expedition comes with many cards. You can almost argue that Terraforming Mars is a card game with a board. 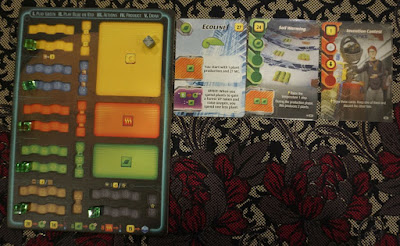 Every player has his own player board, for tracking production capacity and resources on hand. You start the game with a mega corporation card, which gives you some unique abilities. During the game you will play many cards before you. They will be new technologies and buildings which increase your production capacities, allow certain actions and give you victory points. 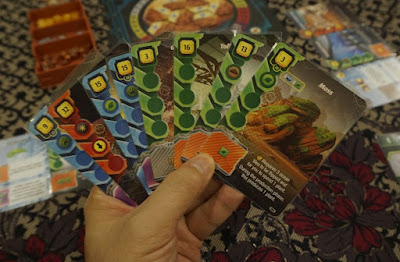 Cards you play come in three types – red, blue and green. The number at the top left corner is the cost to play the card. Cards have various icons and they mean different things. Some abilities give you discounts for specific icons. Some abilities let you score points based on the icons. 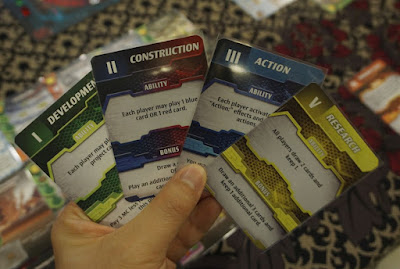 These are called phase cards, and they are the core engine of the game. This game mechanism is similar to that in Race for the Galaxy. Everyone has a set of five phase cards. At the start of a round, everyone secretly picks one card to play, and then you reveal your choices simultaneously. The phases which have been picked are executed in a predetermined order, and every player gets to perform the relevant actions, not just the player who picked the phase. If you are the one picking the phase, you enjoy a small bonus. One element that is different from Race for the Galaxy is you can’t pick the same phase in two consecutive rounds. That creates an additional challenge. It is also additional information you can use to guess what your opponents will pick.
Player interaction comes through guessing your opponents’ intentions and making use of them. Let’s say you want to play a green card and you also want to perform card actions. If you are pretty sure your opponent is going to select the perform card action phase card, you will select the play green phase card yourself. If you are right, you will be able to do both of the things you want. You also want to minimise helping your opponents. When they are dirt poor, it is probably safe to select the phase cards which allow playing cards. They probably can’t afford to pay for playing cards. 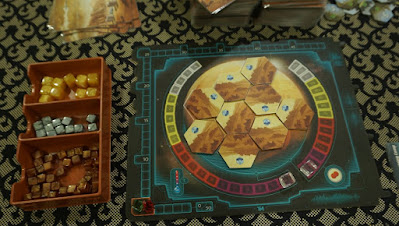 The game board is a glorified tracker keeping track of four things – the number of oceans, the temperature, the oxygen level and player income (which will be victory points as well when the game ends). The gold, silver and copper cubes are generic counters for all resources in the game. This is a clever and convenient way of tracking resources. 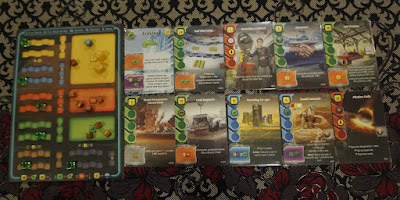 As the game progresses, everyone will have more and more cards in play. Your choice of phase card can have huge repercussions. You know what your opponents can potentially do in each of the phases. 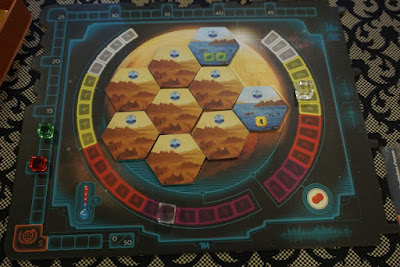 Every time you create an ocean, you receive a small bonus, which is shown at the front of the ocean tile you flip over. The temperature and oxygen tracks are divided into four subsections. Some cards can only be played when the level is within a certain range.
The Play
Ares Expedition at its core is a card combo game. A tableau game. You are constantly trying to make effective combos of cards you draw. You want to get cards which jive well and boost one another. When you put together a nifty combo, you try to utilise it as much as possible. All these combos exist to help you produce efficiently, and convert resources efficiently to victory points. Player interaction comes from the phase card selection mechanism. You do have to watch your opponents and try to minimise assisting them. There is a race element, and you need to get a feel of your opponents’ tempo.
You generally feel like you are building your own little empire or engine. There is little aggression. Although this is a competitive game, the setting is completing the Mars terraforming project together. Everyone is working towards the same goal. This is an efficiency game. How do you contribute more to the cause than the rest? You will use various small tactics to gain small edges. You try to build a more efficient combo than others. You adjust your strategy as you watch your opponents’ engines evolve. 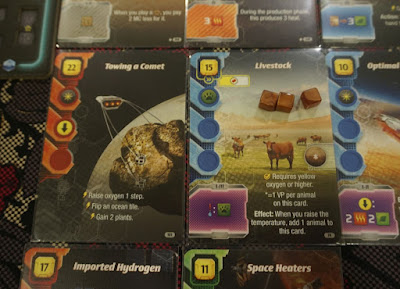 Sometimes you place cubes on cards to represent specific resources as described by the card. Cubes on this Livestock card are livestock. Each cube is worth 1 victory point (VP) at game end. Whenever you increase the temperature on the surface of Mars, you get to place a cube on this card. 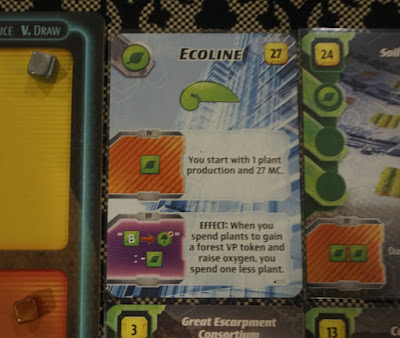 This is one of the mega corporation cards. The bonus here is being able to produce plants right from the get go. When converting plants to forests, you need one fewer plant than usual. 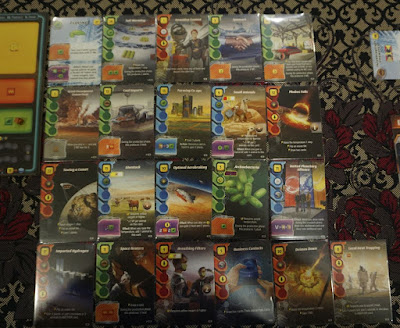 By late game you may have more than 20 cards in play. 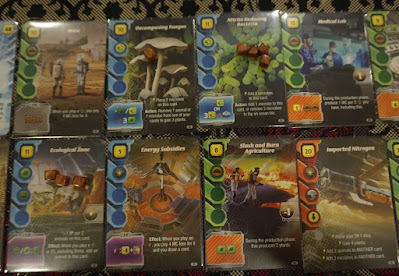 It is important to put together combinations of cards which help one another.