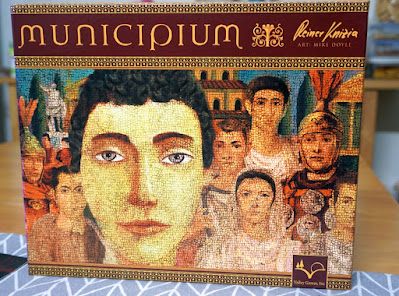 The Game
Municipium is a 2008 game from Reiner Knizia. It was published by Valley Games, which had a bit of reputation during its days. They managed to secure rights to two long out-of-print classics, and the gamer community was lucky to see these back in print. One of the games was Die Macher, and the other Hannibal: Rome vs Carthage. Valley Games often used art and design from Mike Doyle. I used to follow his blog. His style was unconventional. Some of the games with his design work had some useability concerns, but the art was bold and fresh.
The copy of Municipium I bought was a second hand copy. I saw someone selling it on Facebook and decided to get it on a whim. This is an out-of-print game and not easy to come by. I later realised that Allen my regular gaming buddy who lives a 5-minute drive away from me actually has a copy. I had completely forgotten that. Anyway, I’m happy to own this rare game from Knizia.
The setting in Municipium is a colonial town of the great Roman Empire. The town is developed and administered following the Roman governmental template, which means you need to have a temple, a bath and other such buildings that civilised people have. Players are powerful families in town, vying for influence. You send your family members to mingle with folks at the various buildings, hoping to gain influence over the citizenry. There are four classes of citizens (in four different colours) and you need to charm all of them. Whenever you collect a set of citizens in four different colours, you swap them for a coin. Whoever is first to collect his fifth coin wins the game. 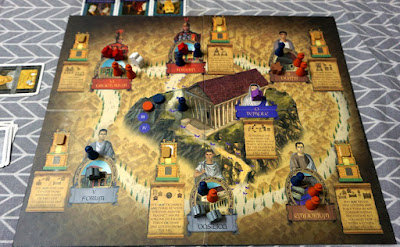 There are 7 buildings on the board. The temple is at the centre. The other six surround it and are linked by a circular path. The temple is accessible via two of the buildings. Your family members travel along the paths to the various buildings. Every player has exactly 7 family members. What you do on your turn is simple: take two steps and play a card. You may get one family member to take two steps, or you may ask two family members to each take one step. As for playing a card, you either draw one from the common draw deck to play immediately, or you play one of your three personal cards. Personal cards are single-use, so you better save them for when they are most effective. Cards in the game have a number of different effects, e.g. letting you use the power of a building where you have more family members than everyone else. 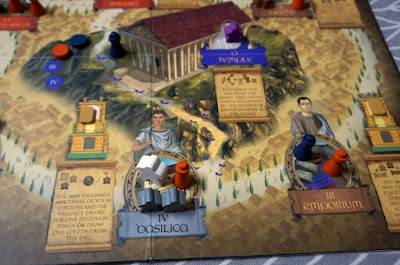 One card effect is advancing the praefect, i.e. the large white pawn above. The praefect always moves one step clockwise along the circle of buildings. Whenever he stops, he gives out a favour token to whoever has the most family members at the building. Favour tokens are just like citizens, except they are jokers and can be treated as any colour.
Every building is associated with one of the four citizen colours. Whenever citizens of a particular colour are added, they must go to a building of that colour. Once a building has three citizens, it is “harvest” time. Whoever has the most family members gets to claim two of the citizens. The player with the second most family members gets the third citizen. Generally this is how you collect citizens.
You will always be competing to have the most family members at as many buildings as possible. You need this to win citizens and also to trigger the building powers. The temple at the centre is for tiebreaking. When the game starts, the tiebreaker priority is set based on family members at the temple. Once the game gets going, this priority is only updated when the temple power is triggered. Ties do happen frequently, so it is often important to fight at the temple. OK that sounds wrong and blasphemous. 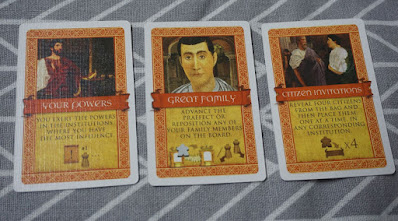 These are the personal cards. Everyone gets the same three cards. They are generally more powerful so use them wisely. 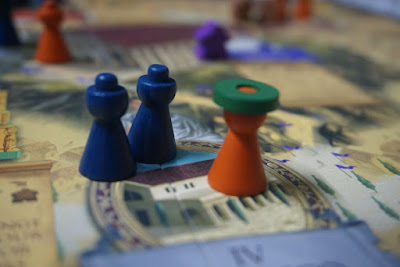 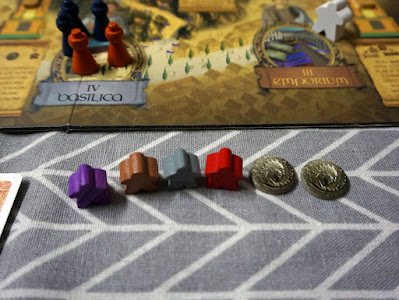 Once you have a set of four citizens, you must trade them in for one coin. The winning condition is 5 coins.

When I first read the rules the game felt a little complicated. Each building has a different power. There are a few situations that can be triggered by player actions and card effects, which need to be handled in specific ways. There are quite a few different card powers too. However once I started playing, I found the game pretty straight-forward. It’s just move two steps and play a card.

Municipium is at its core an area majority game. You compete to have the most family members at the various buildings at the right time, i.e. when the building powers are being triggered, and when there are enough citizens to get distributed. Everyone only has seven family members. If you want to be strong in some buildings, you will be weak in others. Priorities priorities priorities.

The praefect moves in a somewhat predictable manner, so players naturally gravitate towards competing at the next building he will visit. This is a tactical aspect of the game. The game has both strategic and tactical elements, and you can’t ignore either. You need to worry about your overall board position because it’s important for your general success. Yet you must not neglect the small tactical wins because they do add up.

Municipium was never particularly popular. It is a medium weight game. I think the lack of popularity is partly because it is in an awkward niche. It is not simple and welcoming enough to appeal to people who like light and casual games, and it is not the kind of heavy Eurogame that attracts the hardcore Eurogamers. The artwork probably detracted from its appeal. At first glance the board looks rather dull. I find it a game with character. The building powers are interesting and combine to create a coherent and unique experience. They are not just random powers thrown together to create a problem for players to solve. You can make clever combos from building powers. I always enjoy games that provide opportunities for smart play. This is a game with high player interaction.

I consider myself lucky to land a copy of Municipium!