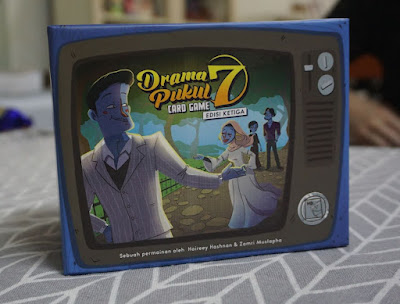 The Game
Drama Pukul 7 is a Malay language game, designed in Malaysia and uses the local 7 o’clock TV soap operas as its setting. It is a successful game in Malaysia and is now in its third edition. It is a game targeting casual gamers and it has wide appeal. You play characters in these corny 7pm dramas, and you compete to become the main star. You compete by condemning and disgracing your opponents, reducing their reputation. If your reputation drops to 0, you are out of the game. The last person standing becomes the star of the show and thus wins the game. 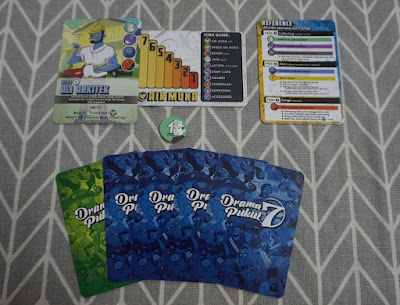 During setup everyone gets a character card. Every character has a unique ability. Your reputation starts at 7. That’s basically your health bar. When it hits zero you are out. You start the game with 5 cards, one green and four blue. The green cards are assets, including equipment and friends. Normally you will pay money for equipment and you pay cards for friends. Equipment and friends are placed in front of you and give you additional powers.
The blue cards are either episode cards or plot twist cards. Episode cards are action cards. You play them to use the effects written on them. Some help you, some hurt your opponents. Plot twist cards are response cards which can only be played when a certain condition is fulfilled. Sometimes they cancel certain episodes, sometimes you steal someone else’s asset, sometimes you divert an attack back to the attacker. Things like that. 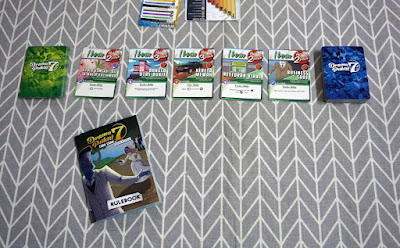 The centre of the table is set up with 5 face-up green cards. These are equipment and friends you can pick from. Whenever one is claimed, a new one is drawn from the deck to refill the row. A turn is simple. The four basic things you do are earning $1 million, drawing a blue card, playing a blue card and condemning one opponent. As you collect assets, they may augment your basic actions and let you do other fun things. The most important action is condemning an opponent. That’s your attack, and that’s how you eliminate your opponents. Drama Pukul 7 is a free-for-all. The sole survivor is the winner. Yes, this is a game with player elimination. 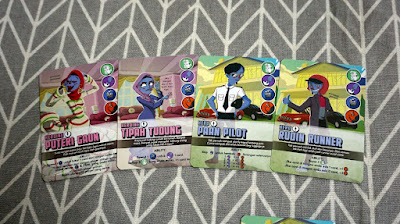 There are plenty of characters to choose from. All of them are double-sided, one side is male and the other female. The names are different but the abilities on the two sides are the same. 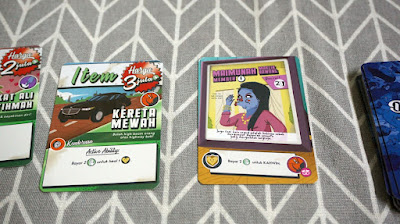 You can marry one of your friends, by spending $2 million. The rulebook cheekily reminds you that you can only marry one person at a time. Once you have a spouse, he or she becomes a long-term shield, always neutralising one point of damage whenever you are attacked. Regular friends protect you too, but whenever they do so, you have to discard them. Spouses protect you for life. Well, at least until a divorce happens. This is soap operas so divorce is certainly one of the dramatic elements.
The Play
We did a 5-player game and I taught the game. I was also the start player. Now in this game it is highly dangerous to be the rules teacher, because you will be perceived as the biggest threat. Before we entered the second round, i.e. before my second turn came, I was already eliminated from the game. Everyone decided it was wisest to gang up on me right on the get go. Drama Pukul 7 is this kind of game. Friends form gangs and attack one another. Ultimately you can’t trust anyone, because there can only be one winner. Your friends will sooner or later stab you in the back. Or maybe in the front. If you want to enjoy Drama Pukul 7, you need to be prepared that it is this kind of game. 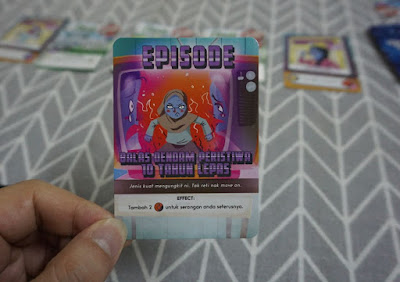 This is one of my favourite cards. This is taking revenge for a 10-year-old grudge. When you play this episode card, your next attack (i.e. condemnation) has an additional strength of 2. This card was partly how I got eliminated so quickly. My reputation started at 7. With 4 opponents ganging up on me, using their basic attacks as well as special powers on cards, it wasn’t surprising that I was taken out before Round 2. I probably should have pleaded harder for my life. 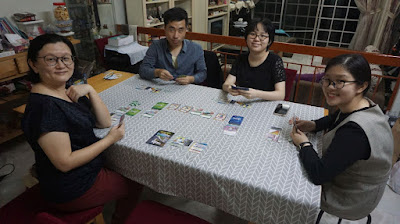 Once I was out, my wife Michelle became the second victim. The kids worked together to get rid of all the adults first. 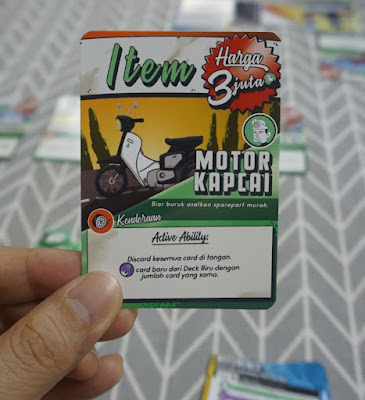 This type of scooter is common in Malaysia. The game has many local elements which resonate with me.
The Thoughts
The target audience for the game is certainly Malaysians. It is in Malay, and it is very colloquial, with some English and other local dialects mixed in. This is endearing.
Some of the game mechanisms are not defined clearly. The game cards have many different abilities, and sometimes some combinations raise questions. The rulebook suggests to use the rules as just a general guide. If you come across any situation where the rulebook doesn’t have a direct answer for you, just decide for yourself how you want to play. I generally prefer the rules to be explicit and exhaustive, but for a rowdy party game, being a little loose is not a deal breaker.
Although a very Malaysian game, this may not quite work as a souvenir, because it has a lot of text, and it is in Malay. Non-Malaysians will struggle to play, maybe with the exception of Indonesians. I like the unique art in Drama Pukul 7 and the many familiar local elements (especially that Food Panda rider). I enjoy the humour too.