In December 2022 my family visited Japan on holiday. When planning this family trip, one idea came to me – why not take the opportunity to meet a game designer I greatly admire, Mr Seiji Kanai, designer of Love Letter, one of my favourite games. Now I’m not exactly a young boy and it is weird to be still doing this kind of fanboy stuff. But YOLO. It’s a little awkward reaching out to a complete stranger, and I didn’t dare to have too high hopes. I was pleasantly surprised when Mr Seiji Kanai responded promptly and positively. I don’t know Japanese and the email I sent out was translated using Google Translate. I guess it was at least understandable even if it probably sounded weird. We arranged to meet on Christmas Day, Sun 25 Dec 2022, in Tokyo Train Station, at the famous silver bell. 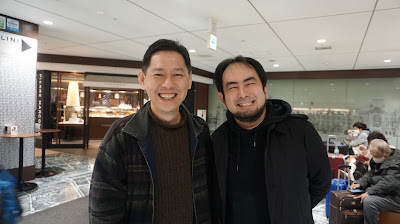 We had hoped to be able to find a cafe to sit down and chat, but Christmas Day and a Sunday at Tokyo Station? It was mission impossible that even Tom Cruise couldn’t have managed. So we stood and chatted a while. 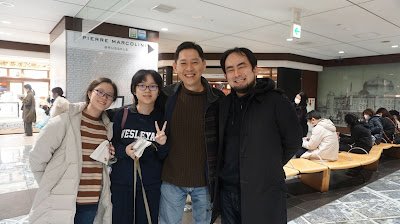 Both my daughters have played Love Letter and they enjoyed it a lot too. Unfortunately my wife Michelle could not be in the photo, because she was holding the camera and taking the photo.
When I wrote to Mr Seiji Kanai, I said I was a fan of Love Letter and I would like to meet him to ask for his signature on my copy of the game. After he replied, I remembered that I actually didn’t have a copy of the game! At least not an official copy. The old battered copy I had was a print-and-play version downloaded from BoardGameGeek.com. Someone created an Adventure Time retheme of the game, and that was long before the official Adventure Time version was released. I saw it and thought it was rather cute. That was what prompted me to print and make a copy of the game and to try it out. I really should thank this BGG user. This fan retheme was what introduced me to Love Letter, which I eventually fell in love with.
For many years I have been playing with this old print-and-play copy. I never had the urge to buy the official copy because I liked the art style of the fan version more. Now that I was going to ask for the designer’s signature, I certainly must buy an official copy. I bought the latest English edition, which comes with a classy velvet pouch instead of a box. The game has changed a little. There are two new characters. However you can still play with the original rules by removing some cards. I have been playing Love Letter since 2014, and I have introduced it to many friends, yet only now I own an official copy. 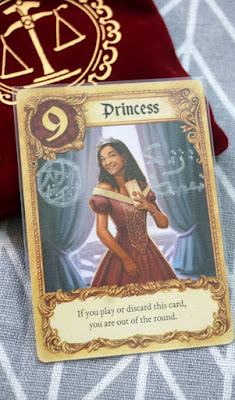 In the latest English edition, the princess is a 9 instead of an 8. Don’t take it the wrong way. I don’t mean scoring beauty out of 10. I just mean the number value in the game. So this above is my designer signed copy of the princess card and my preciousss. I brought a silver marker pen all the way to Japan for Mr Seiji Kanai to sign on this card. 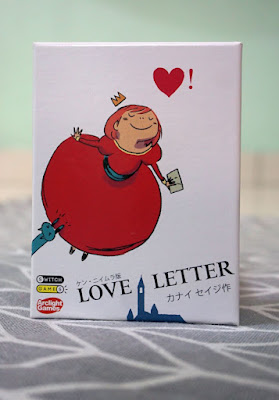 In our email communication, I asked Mr Seiji Kanai that I would like to purchase a Japanese edition of Love Letter from him. When we met, he handed me a copy and insisted it was a gift for my children. It was not just a copy of Love Letter, but also two more games he designed. That was so kind of him. I brought a copy of my recently released game Dancing Queen for him too. Although Dancing Queen is a rather different game, when designing it I applied many principles I learned from Love Letter. I also brought three woodcraft bookmarks from Malaysia for Mr Seiji Kanai. I said if he ever visits Malaysia, he must let me know and I would bring him around.
I love the art in this Japanese edition of Love Letter. Absolutely lovely. 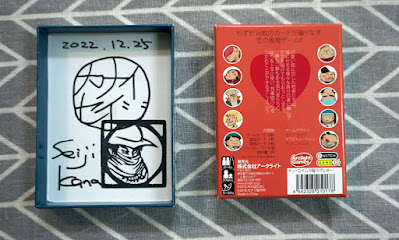 True and experienced celebrities are well prepared and professional when it comes to giving signatures to fans. Mr Seiji Kanai brought along a compact toolbox packed with equipment for signing games, including marker pens, his own custom stamp and an ink pad. His game signing includes putting his unique stamp. 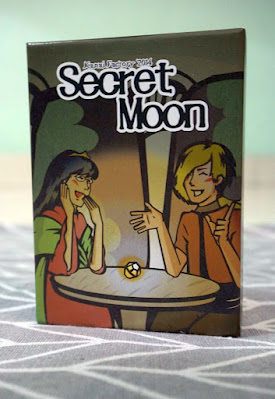 Secret Moon was the second game Mr Seiji Kanai gave to me (well technically he said it was for the children, but, you know, communism). This is an English edition game. It requires a minimum of 5 players and I have yet to give it a go. 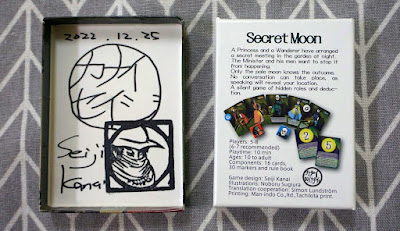 Naturally I grabbed the chance and asked Mr Seiji Kanai to sign this game too. 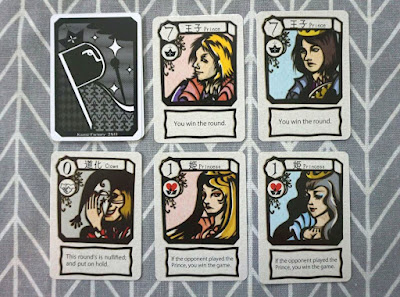 The third gift was R. I have played it before. It is a 2-player microgame with only 16 cards. The version I played was a fan retheme using Star Wars characters. The original is certainly very different. 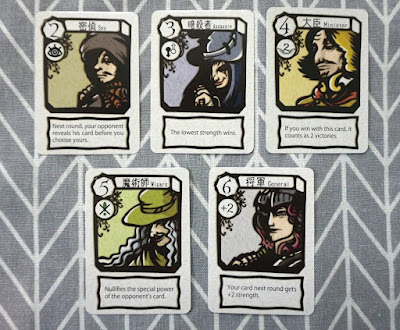 Before meeting Mr Seiji Kanai, he told me that his English was poor and communication might be challenging. I was prepared that we might have to rely on Google Translate to speak and conversation might be slow. However his English was much more fluent than he had lead me to believe. We were able to converse smoothly and did not touch Google Translate or our smartphones at all.

One thing I asked him was his secret to success in the boardgame industry. His reply was simple, and it was the same thing Alan Moon (Ticket to Ride) said in an interview. He said he was just lucky. I notice one common trait among successful people. They tend to be humble. I think it is because they are humble, that they have open minds and they are always ready to learn and improve, and thus they become better and better persons. Mr Seiji Kanai explained that he was an early mover in the boardgame industry in Japan. When he got into boardgames, there weren’t many other people doing it, so he enjoyed the first mover advantage. He was a pioneer. I say his success is much more than luck. I believe there is much hard work and sacrifices to achieve what he has achieved. His games are clever and well-crafted.

He shared with me that visiting the Essen game fair was an excellent learning experience. He learned how to market his games to an international audience. There is certainly a lot I can learn from him, his journey and his games.